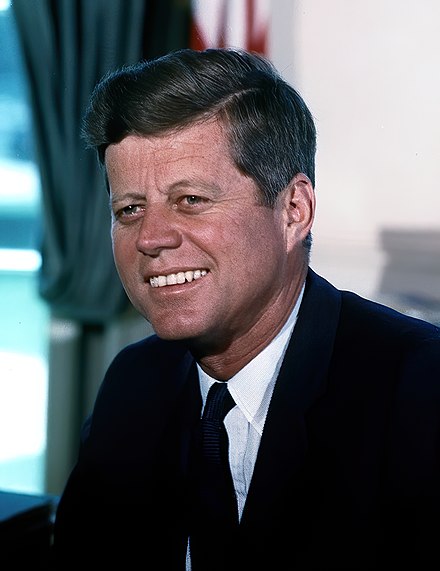 Eight years ago, I wrote a column about what I see as the synchronistic connection between myself and John Fitzgerald Kennedy, beginning with the fact we share the same birth date, May 29. The key point in the column, at least to me, was my pledge "to remember to honor him not on the date he died, but on the date we both were born."

It's a pledge that's even more important today, I think, when there is such a dearth of public figures who inspire the kind of hope and pride in America that JFK did for me and millions of others. Hope and pride are two elements in short supply in today's political debate. They've been replaced by deceit and anger, which only begets more deceit and anger. A path to ruin. So today, on what would be JFK's 104th birthday, I choose hope.

My connection with Kennedy began to take shape in my college years. His handling of the Cuban missile crisis allowed me to graduate on time. But as I was home waiting to report to Fort Dix, N.J., for basic training, JFK was assassinated, on Nov. 22, 1963, postponing my duty for a month. And 20 years later, as fate would have it, the first editorial I was asked to write as the new editorial-page editor for The Times Herald-Record in Middletown, N.Y., was to mark the 20th anniversary of Kennedy's death. Headline: "The Measure of the Man."

Four years ago, I wrote: "Much of it still applies. The legend of JFK Camelot (Jackie, John-John and Caroline), PT-109, Navy and Marine Corps Medals, the Purple Heart, 'Ich bin ein Berliner,'" "Ask not", the challenge to put a man on the moon, the Peace Corps, the New Frontier, a limited nuclear test-ban treaty still far outweighs his failings, including extramarital affairs, hiding illnesses from us, escalation of the American troop presence in Vietnam and a reluctance to take a firm stance in the growing battle over segregation in America.

"He is regularly rated as one of this country's greatest presidents, a testament I believe to his ability to inspire hope, faith and courage in Americans, especially young Americans like me, at a time of grave danger. Much of that owes to his youth (he was 43 when elected president, the youngest ever) and his ability to eloquently deliver the words written for him by Ted Sorensen, a synchronistic match if there ever was one. But Kennedy, a Harvard graduate, was no slouch at writing either, having won a Pulitzer Prize for biography with 'Profiles in Courage.'

",,, Kennedy's (message) was unfailingly one of hope. We can do this. We are up to the challenge. We care. His average approval rating as president was 70 percent. He also ranked third, behind Martin Luther King, Jr. and Mother Teresa, in Gallup's List of Widely Admired People of the 20th century, according to Wikipedia."

The question I still ask myself is, what might JFK have done, what might he have meant to America and the world, if he had lived longer?

In that column four years ago, to my ever-lasting embarrassment on the Internet, I also said that I shared a birthday with another great communicator, Bob Dylan. I was off by three days. Belated happy birthday to the Nobel poet laureate anyway.

On a positive note, I subsequently discovered that May 29 is also the birthday of Harry G. Frankfurt. The professor emeritus at Princeton University authored a 67-page essay entitled "On Bullshit." It was a New York Times best seller in 2005. And it also explained to me how a person like Donald Trump could say the things he said, flying in the face of other things he had recently said, none of which had any basis in reality, and keep doing it. It's not lying, Frankfurt explains, it's bullshit. The liar has to remember what he said. The bullshitter does not. He doesn't care.

Professor Frankfurt is apparently alive and well and celebrating his 92nd birthday today. Happy birthday, to you, too, professor. A day for hope and truth

Related Topic(s): America; Anger; Bob Dylan; Harry Frankfurt; Hope; JFK; JFK Assassination; Middletown; President; President John Kennedy; (more...) Truth, Add Tags  (less...)
Add to My Group(s)
Go To Commenting
The views expressed herein are the sole responsibility of the author and do not necessarily reflect those of this website or its editors.