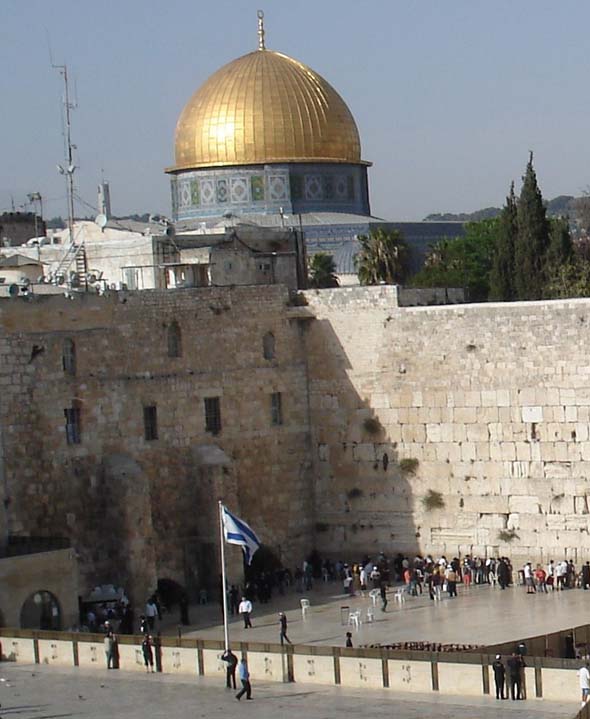 Dome of the Rock
(Image by Dan Lieberman)   Details   DMCA
Places have left their mark in the historical narrative - Lidice, where the Nazis, in the late spring of 1942, executed 173 men from the Czech village in reprisal for the assassination of Deputy of Bohemia and Moravia, Reinhard Heydrich; Wounded Knee, where, on December 29, 1890, a dispute between soldiers from the Seventh U.S. Cavalry Regiment and an arrested band of Lakota warriors resulted in the massacre of more than 250 men, women, and children of the Lakota tribe; Montse'gur, a rebuilt castle high in the French Pyrenees, where, the last of the Cathars, a Gnostic type sect that were considered heretics by the Catholic Church, were sieged and eventually executed in March 1244; Guernica, Spain, where Nazi Stuka dive bombers killed Basque loyalists in the Spanish civil war; and Baba Yar, Ukraine, a ravine on the outskirts of Kiev, where German forces killed at least 34,000 Jews during September 1941. Add the village of Sheikh Jarrah to those of historical remembrances.

The intent to evict Palestinians from their established homes served to highlight the more than 70 years of oppressions and well prepared destruction of the Palestinian community, forced attention to simultaneous aggressions against the Palestinian people, provoked serious warfare in the area, and led to a worldwide outcry in defense of the helpless and criminally attacked Palestinians. Sheikh Jarrah is now an eternal symbol for Palestinian independence and escape from Israel's brutality.

Before expounding further on Sheikh Jarrah's path to immortality, let us more accurately delineate the confused and misreported events that escalated the crisis. Regardless of the truth of any of the claims and their refutations, there is no necessity for anyone to collect rent on these properties and evict tenants because they have not paid supposed rents.

If residents who received housing from the Jordanian government after the 1947-1948 hostilities agree to pay rent, they will concede the property ownership to others and still not be guaranteed that they will be able to remain in their established homes in the future. Those trying to force the issue are obfuscating their intentions; they certainly did not purchase the rights to the property as a real estate investment - paltry and risky investment - nor for habitation. Living in a predominantly Islamic neighborhood is not a desired place for an Orthodox Jew to raise a family. The proposition that these people are followers of Simeon the Just, a fourth century BCE Jewish High Priest, and want to live near his tomb is suspect. Simeon the Righteous would certainly disapprove of followers who contradicted his teachings and followed a path of deceit rather than righteousness. Living close to a deceased person from ancient history that nobody of today or yesterday knew personally does not convey any benefits. There are millions of minor humanitarians in tombs around the world ─ take your pick. We know Ulysses Grant is buried in Grant's tomb, but are we certain that Simeon the Just is buried in Jarrah?

According to archaeologists who excavated the site, it is the 2nd-century CE burial site of a Roman matron named Julia Sabina. From Archaeological researches in Palestine during the years 1873-1874, by Clermont-Ganneau, p. 269-270.

While carefully studying the interior of this sepulchre, apparently of such a commonplace character, I made in 1871 an unexpected and very interesting discovery, a Roman inscription whose existence had escaped the notice of the archaeologists who had preceded me, even as it has that of those who have followed me, for up to the present day no one, as far as I know, has noticed it or mentioned it.

I took an excellent squeeze of it. The first line alone can be read with certainty: Julia Sabinae. This name Julia Sabina reminds one of that of "ius Sabinus, first centurion of the Tenth Legion Fretensis, a dedicatory inscription to whom I once brought to light from the inside of Jerusalem itself. Can our Julia Sabina have been the wife or daughter of this Julius Sabinus? The form of the letters in the two texts shows considerable similarity, moreover, the face of the stone in the one case and of the rock in the other seem to have been smoothed with the same toothed tool, worked in the same fashion. This identity of treatment is strikingly apparent when one compares the two squeezes. If this ancient Jewish tomb was re-adapted during the period of the Roman occupation to receive the body of a woman connected by marriage or by birth with one of the officers of the legion, which bore so terrible a part in the war against the Jews, one can easily see how eager the latter must have been to obliterate as soon as they were able, the traces of this double profanation of one of the sepulchres of their ancestors, by hammering the epitaph thus insolently displayed.

Israeli police continued their habit of treating the Palestinians as if they are an encumbrance by ejecting Palestinian youths from the Damascus gate ─ their evening gathering place after a day of Ramadan fast ─ and storming the al-Aqsa mosque. Using tear gas, stun grenades, and rubber-tipped bullets, police entered the mosque compound, clashed with protesters, and, reportedly, injured hundreds. All this mayhem left Hamas in a quandary ─ what to do to preserve Palestinian dignity? Knowing that its bold statement that "any more Israeli provocations will lead to a severe Hamas reaction," is an invitation that Israel relishes, 'die if we do and die if we don't' Hamas released its rockets on Israel. For Israel, provoking Hamas so that its forces can smash Gaza is a national sport, irrespective of the usual dozen Israeli deaths that accompany the onslaughts. Israel could have halted its oppressive tactics but, as always, continued with the same script and replayed the same movie.

When rockets from Gaza strike Ashkelon (previously the Palestinian town named al-Majdal), whom do they hit, and who fired them? Those hit by the rockets are descendants of those who stole the land and benefactors willing to be party to the theft from the Palestinian families who lived in the area for generations. In the 1945 statistics, al-Majdal had a population of 9,910. Not only had United Nations (UN) Resolution 181 awarded Ashkelon to the anticipated Palestinian state in, but the mass of Palestinians living in the area played no part in the hostilities. An Egyptian army, not invited by al-Majdal inhabitants, entered the town to protect its status under UN Resolution 181 and failed in the endeavor. Israeli forces captured al-Majdal on November 4, 1948. In the later months, the Israeli administration denied return to the original inhabitants that fled the engagements and forcibly removed the remaining inhabitants, almost all to Gaza.

Those firing the rockets are those who had their land, livelihood, and the futures of all their descendants stolen from them by the Israelis. The innocent victims of land theft and ethnic cleansing suffered deprivation in the barren desert of Gaza. Later they endured decades of oppressive Israeli occupation. After an end to physical occupation, Israel has controlled and intruded into their lives with constant violence against them - destruction of their buildings, factories, agricultural lands, water supplies, power stations, cultural institutions, denial of the fishing rights, keeping them caged in a limited area and preventing them from leaving. Israel determines the fate of the people in Gaza and seizes every opportunity to make their lives miserable. Shooting rockets at those who have victimized them sounds, and is, irreverently revengeful, but serves as a catharsis for the frustrated and aggrieved Palestinians ─ let the oppressor know what it feels to live in fear and danger,

When the United Nations Human Rights Council investigates alleged war crimes committed during the latest conflict between Israel and Hamas, the council should consider that the constant deadly military exchanges between Israel and Hamas affect relatively few Israeli families, while the entire millions in Gaza and the West Bank feel the shattering force almost every minute of every day.

Dan Lieberman is the editor of Alternative Insight, a monthly web based newsletter. His website articles have been read in more than 150 nations, while articles written for other websites have appeared in online journals throughout the world(B 92, (more...)
Related Topic(s): Israel Killing With U S Weapons; Israeli Attacks On Gaza; Israeli Attacks In Gaza; Israeli Bombing; Israeli-palestinian; Israeli_Propaganda; Palestinian Massacre; Palestinians And Israel Multi-national Peace Talks, Add Tags
Add to My Group(s)
Go To Commenting
The views expressed herein are the sole responsibility of the author and do not necessarily reflect those of this website or its editors.