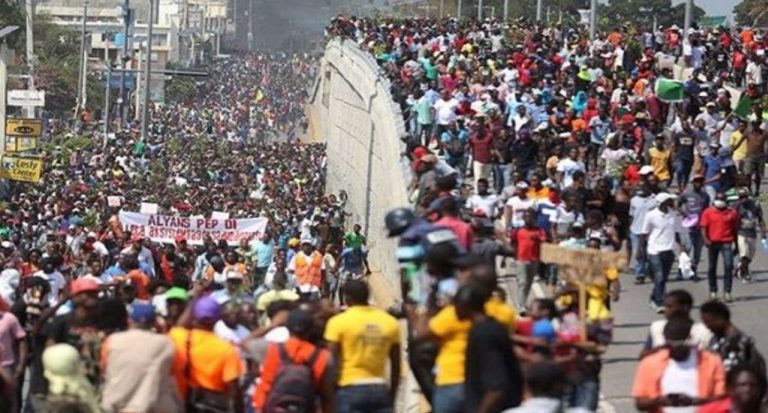 Haiti is the site of the most sustained popular uprising among many that are currently sweeping the globe. It's also the most explicitly anti-imperialist, which is part of the reason why it has received the least coverage.

For six weeks much of Port-au-Prince has been shuttered in the longest in a series of strikes since the revolt began 15 months ago. There have been innumerable mass protests by diverse social sectors calling for president Jovenel Moïse to go.

Last week protesters reportedly threw rocks at the Canadian Embassy in Port-au-Prince. On Friday Radio Canada's Luc Chartrand highlighted the widespread hostility towards the US and Canada: "The walls of Port-au-Prince are covered with graffiti against the UN and also against what everyone here knows as the 'Core Group', a group of donor countries, including Canada, the United States, European Union and the Organization of American States, without the support of which no Haitian president can remain in office long. During protests it is common to see people disparaging foreigners and symbols of their presence such as hotels."

While Haitians have repeatedly criticized Canadian policy over the past 15 years, the Radio Canada report was a rare event in the dominant media. But the intensity of the popular uprising has been making it harder to ignore. The other reason is activism in Canada, an imperial centre. Solidarite' Quebec-Haïti #Petrochallenge 2019 founder Marie Dimanche and I met Chartrand and a Radio Canada colleague before they left for Haiti and sent them critical information. They wanted to hear our point of view because Solidarite' Quebec-Haïti has aggressively criticized Canada's role in Haiti by among other means occupying Justin Trudeau's electoral campaign office.

Since detailing some of Solidarite' Que'bec-Haïti bold actions that generated coverage three weeks ago in "Canadian imperialism in Haiti in the spotlight" the group held a press conference covered by CTV and a rally at Trudeau's office covered by Global, TVA and other news outlets. We also attempted to disrupt Trudeau's final election rally, which prompted Radio Canada to describe 10 of us chanting "Canada out of Haiti". At this point no Canadian journalist covering Haiti can reasonably claim to be unaware that there is criticism of Ottawa's policy towards that country.

In another sign of dissent, the Concertation pour Haïti, a collection of mostly government funded NGOs who were cheerlead ers of Canada/Quebec's important role in violently ousting Jean-Bertrand Aristide's government in 2004, has called for a transitional government. Last week's statement noted: "Haiti is at a pivotal moment. The current government is decried by the overwhelming majority of the population. Nearly all civil society groups have spoken out for the departure of Jovenel Moïse. ". However, the current government seems to have the full support of the international community " We invite Canada to make the right choice and use its influence in the international community to support" a presidential transition.

Despite growing challenges to its policy, Ottawa seems to be staying the course. On Wednesday a new Canadian ambassador was accredited at the national palace and reportedly "renewed Canada's commitment to continue to accompany President Jovenel Moïse in his efforts to improve the living conditions of his people." Earlier in the month the government put out an outrageous, if correct, travel advisory, warning Canadians that Haitian "police have used tear gas and live ammunition to disperse crowds." Apart from this message to Canadians, the government has yet to directly criticize the killing of Haitian demonstrators by a police force that Canada has funded, trained and backed diplomatically since the 2004 coup. On October 15 the UN estimated at least 30 Haitians had been killed since mid-September. Most of them were likely killed by police.

Beyond its involvement with a repressive police force, Canada has provided financial and diplomatic backing to the neo-Duvalerist criminals subjugating Haiti's impoverished masses. Two weeks ago Le Devoir reported that Canada has given $702 million in "aid" to Haiti since 2016. In February international development minister Marie-Claude Bibeau, who travelled to Haiti on multiple occasions, said "Haiti is one of the biggest development programs we have. Our ambassador in Port-au-Prince is in constant contact with the government."

The Canadian Embassy has put out a stream of statements defending Moïse (though they are becoming softer). Amidst the general strike in February Bibeau was asked by TVA, "the demonstrator s demand the resignation of the president. What is Canada's position on this issue?" She responded by attacking the popular revolt: "The violence must stop; we will not come to a solution in this way." But the violence is overwhelmingly meted it out by the Canadian backed regime.

At that time Canadian special forces were quietly deployed to the Port-au-Prince airport. The Haiti Information Project reported that they may have helped family members of President Moïse's unpopular government flee the country.

Haitians are engaged in a remarkable popular revolt against Canadian policy. Solidarity activists across the country should try to amplify their message.

Related Topic(s): Canada; Haitian Elections; Revolt, Add Tags
Add to My Group(s)
Go To Commenting
The views expressed herein are the sole responsibility of the author and do not necessarily reflect those of this website or its editors.