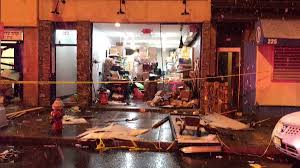 On Tuesday two people with connections to the Black Hebrew Israelites shot and killed a Jersey City police detective. The killers then drove to a kosher market about a mile away and attacked with long guns, killing three Jews and wounding another Jew at the kosher market. The two religious murderers were themselves killed in a shootout with police.

Black Hebrew Israelites are black people, primarily in the US, who believe they are the true descendants of the Israelites of the Hebrew Bible/Old Testament. Like the Bible itself, the theology of the Black Hebrew Israelites is based upon "revelation"/nonsense. William Saunders Crowdy was a freed slave who in 1896 claimed he had a revelation/vision from God telling him that blacks are the descendants of the ten lost tribes of Israel. Anyone who has objectively read the Hebrew Bible/Old Testament knows that the "revelations" received by the authors of the writings in that religious book believed God chose them, the Hebrews/Jews, above all people that are upon the face of the Earth (Deuteronomy 7:6). This nonsensical "revelation" is sandwiched between many other "revelations" ordering the Israelites to slaughter and enslave their neighbors and to take their land.

Similar to the Black Hebrew Israelites in their belief that they are the true chosen ones of God from the Hebrew Bible/Old Testament, are the white people in the Christian Identity movement. A part of Christian Identity is the Phinehas Priests. They are responsible for several acts of religious violence that resulted in the deaths of the people they targeted. The Phinehas Priests are based on the Bible story found at Numbers 25:6-13, in which an Israelite man brings a Gentile woman into the Israelite camp. An Israelite named Phinehas is angered by an Israelite man and a Gentile woman being together. Phinehas kills them both. These two murders pleased the god of the Bible.

Looking at the Hebrew Bible/Old Testament based Black Hebrew Israelites, the Christian Identity Phinehas Priests and the modern Jewish state of Israel, it's not surprising that they all are violent and inflict cruelty and violence on people around them. As Thomas Paine pointed out in The Age of Reason, The Complete Edition, "Belief in a cruel god makes a cruel man."

Religious violence is based primarily on the writings of men who falsely claimed their writings are from God. They claim they received the messages written in the Bible, Quran, Book of Mormon, etc. through Divine Revelations from God. The Deist Thomas Paine dismantled the idea and claims to "revelations" in The Age of Reason. Paine wrote:

"Revelation, when applied to religion, means something communicated immediately from God to man. No one will deny or dispute the power of the Almighty to make such a communication, if he pleases. But admitting, for the sake of a case, that something has been revealed to a certain person, and not revealed to any other person, it is revelation to that person only. When he tells it to a second person, a second to a third, a third to a fourth, and so on, it ceases to be a revelation to all those persons. It is revelation to the first person only, and hearsay to every other, and consequently they are not obliged to believe it."

As Deists work and promote Deism, we are reaching more and more people with the realization that God gave us reason, not religion (which is the title of one of my Deism books). The more we do to get the word out about Deism, the more people who are currently under the influence of the "revealed" religions and their idea of a cruel god will break free of the damaging, selfish and fear-based superstitions of the "revealed" religions. This makes the lives of the liberated individuals much better, and, when a large enough number of people are reached, society itself will greatly improve. We truly do, as Thomas Paine wrote, "have it in our power to begin the world over again."

Bob Johnson is a paralegal and a freelance writer in Florida. He was raised Roman Catholic, but after reading Thomas Paine's The Age of Reason, he became a Deist. In 1993 he founded the World Union of Deists and in 1996 he launched the first web (more...)
Related Topic(s): Belief; Deism; God; People; People; People Thomas Jefferson; Religion; Religious Hypocrisy; Violence, Add Tags
Add to My Group(s)
Go To Commenting
The views expressed herein are the sole responsibility of the author and do not necessarily reflect those of this website or its editors.