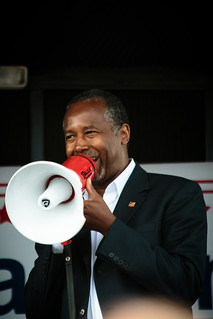 Religious belief as a qualification or disqualification for the presidency of the United States is an old can of worms. Dr. Ben Carson, a neurosurgeon running near the front of the pack for the Republican Party's 2016 presidential nomination, cracked that can open and invited the body politic to feast on September 20 on NBC's "Meet the Press."

"I would not advocate that we put a Muslim in charge of this nation," Carson told host Chuck Todd. In a follow-up interview with The Hill, Carson elaborated: "I do not believe Sharia is consistent with the Constitution of this country " Muslims feel that their religion is very much a part of your public life and what you do as a public official, and that's inconsistent with our principles and our Constitution."

Public response has been swift on both sides -- affirmation from segments of the GOP base, including evangelical Christians and neoconservatives, outrage from civic-minded Muslims and, oddly, some "separation of church and state" advocates. Interestingly, US Senator Ted Cruz (R-TX), also seeking the nomination, pointed out that the Constitution forbids "religious tests" for public office.

Cruz is right as far as he goes. A Muslim cannot be legally forbidden to seek, or be elected to, the presidency if he or she is otherwise constitutionally qualified.

On the other hand, voters are free to impose any tests they please when considering candidates. Mitt Romney's Mormonism gave some voters pause in 2008 and 2012. John F. Kennedy's Roman Catholic faith was a big issue in 1960, with critics wondering if he would "take his orders from the Pope." If Carson continues in the top tier, his own Seventh Day Adventist beliefs might come under scrutiny.

I don't come down in the moderate center very often, but that's where I find myself here.

Most Americans adhere to some system of religious belief. I'm one of those Americans. I don't consider that a disqualifier for public office. What I do expect from candidates vis a vis their religious beliefs are two things:

First, if their beliefs forbid them to do the job and follow the laws relating to the job (cough " Kim Davis), they should neither seek nor accept the job.

Secondly, even if their positions on issues are informed by their faith, they should be prepared to justify those positions, using reason and logic, to persons of other faiths (or of no faith) if they expect to be elected.

Like Carson, I admit to skepticism as to whether a devout Muslim would pass these tests. Unlike Carson, I put Christian candidates to the same test and give some of them -- Baptist minister Mike Huckabee, for example -- a failing grade.

Related Topic(s): Ben Carson, Add Tags
Add to My Group(s)
Go To Commenting
The views expressed herein are the sole responsibility of the author and do not necessarily reflect those of this website or its editors.