We're living in times of war psychosis. Regime Change wars have no basis in international law. They are entirely illegal, and they are all based on lies. We have seen the results, which are always catastrophic for all but certain vested interests and the oligarch ruling classes. Yet, despite the lies, despite the revelations, public consent is successfully fabricated for each new war.

The truth must shine through because the stakes are increasingly high. The West and its allies have no basis in International Law for their occupation of Syria, for the economic blockade, or for their support of the terrorists in Syria. They are the aggressors. NATO and its allies are committing Supreme International Wars Crimes, not Syria and Syrians.

NATO member Turkey's invasion and occupation of Syria has further shredded the veil of plausible deniability since it not only supports and protects the terrorists as its NATO partners have always done, but it is also providing further cover for them by dressing them in NATO uniforms. (1)

None of this is surprising since US-led NATO has played "musical chairs" with its terrorists throughout the criminal Regime Change war. 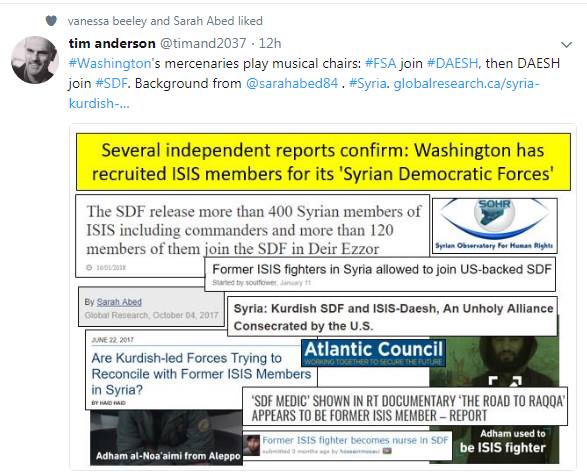 Syrians are understandably disgusted with the criminal occupiers, especially since the aforementioned occupiers are stealing much needed oil resources during the cold Syrian winter.

This is the context underlying a recent incident in which U.S troops reportedly killed a Syrian soldier.

"ABC NEWS IS LYING TO YOU. TODAY, THE US TROOPS WHO ARE OCCUPYING THE SYRIAN OIL WELLS IN EASTERN SYRIA WERE PELTED WITH STONES AND SMALL ARMS FIRE BY CIVILIANS OF THE AREA, LOCAL FARMERS AND EVEN YOUNG KIDS. I SAW THE VIDEO, THEY WERE JUST LOCAL PEOPLE WHO ARE SICK AND TIRED OF BEING OPPRESSED BY THE ILLEGAL AMERICAN TROOPS. THOSE LOCAL, AND MYSELF, ARE WITHOUT ELECTRICITY, COOKING GAS AND LOW ON GASOLINE BECAUSE PRESIDENT TRUMP ORDERED THOSE TROOPS TO STAY AND STEAL THE OIL. THEY ARE FOLLOWING ORDERS, BUT THOSE ORDERS MAKE THEM THIEVES. ABC NEWS HAS MISREPORTED THE ENTIRE EVENT, AND THEIR JOURNALISTS ARE NOT ANYWHERE NEAR THE PLACE, AND NOT EVEN INSIDE SYRIA. THEY ARE SO FAR AWAY THEY WOULD NEED A PLANE TICKET. THIS IS UNACCEPTABLE. THE FACTS OF THE CASE: THE US TROOPS CAME UNDER ATTACK BY STONES AND SMALL ARMS FIRE, PRIVATE CITIZENS USING THEIR HOUSEHOLD GUNS. IN RETALIATION, THE US MILITARY BOMBED RESIDENTIAL AREAS, KILLING CIVILIANS AND WOUNDING OTHERS, AS YOU SEE FROM THE HOSPITAL PHOTO CAPTION. CIVILIANS ARE ALLOWED TO FIGHT THE OCCUPATION WITH ARMS UNDER THE GENEVA CONVENTION. THE US MILITARY IN RESPONSE SHOULD HAVE BACKED OFF, FOUND A SAFE PLACE TO RETREAT TO, THEIR BASE, AND SHOULD NEVER HAVE SENT PLANES TO BOMB CIVILIANS. I COUNT TODAY AS ONE OF THE DARKEST CHAPTERS OF THE US OCCUPATION OF SYRIA." (2)

Cutting Through the War Propaganda. Listen to What Syrians are Saying

The following video shows the conflict between the US Armed Forces occupiers and Syrian citizens.

Related Topic(s): International Law; Regime Change; Regime-change Wars, Add Tags
Add to My Group(s)
Go To Commenting
The views expressed herein are the sole responsibility of the author and do not necessarily reflect those of this website or its editors.