The exodus from Hurricane Maria comes after a decade of economic strife. 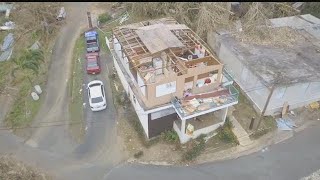 The exodus of tens of thousands of voting-age Puerto Ricans to the U.S. mainland following Hurricane Maria is likely to change the political complexion of several states, but nowhere more than Florida, where the refugees expected are equal to more than half of Donald Trump's margin over Hillary Clinton last November.

Upwards of 77,000 people over age 18 -- all of them eligible voters -- are likely to move to Florida, according to a detailed study from the Center for Puerto Rican Studies at Hunter/City University of New York. In November 2016, Trump beat Clinton in Florida by nearly 120,000 votes. An additional 15,000 school-age youths are also expected in Florida.

"Hurricane Maria's impact on Puerto Rico and its population is unprecedented. Though it is difficult to find comparable situations, we estimate that between 114,000 and 213,000 Puerto Rico residents will leave the island annually in the aftermath of Hurricane Maria," wrote Edwin Melendez and Jennifer Hinojosa in their Maria Exodus research brief. "From 2017 to 2019, we estimate that Puerto Rico may lose up to 470,335 residents or 14% of the population. In other words, Puerto Rico will lose the same population in a span of a couple of years after Hurricane Maria as the island lost during a prior decade of economic stagnation. Our projections indicate that Florida is the state most likely to be affected by the exodus -- with an estimated annual flow of between 40,000 and 82,000 people."

Some 20,000 Puerto Ricans arrived in Florida in the first two weeks after storm, but that figure is expected to increase as the recovery has been exceedingly difficult and slow.

"I was raised here. I lived here. My parents died here," a man told LatinoUSA, the public radio program, in a video on the Center for Puerto Rican Studies' Twitter page. "But now I plan on leaving... I don't see a future here."

As the CUNY researchers explained, the storm came after a decade of imploding economics, which had already caused an exodus of thousands to the mainland.

"Researchers from the Climate Impact Lab estimated the impact of Hurricane Maria using an econometric model of the costs of cyclones over the past 60 years and applied it to the pre-storm economic conditions in Puerto Rico," they wrote. "They found that 'Maria could lower Puerto Rican incomes by 21 percent over the next 15 years -- a cumulative $180 billion in lost economic output.' They conclude that 'Maria could be as economically costly as the 1997 Asian financial crisis was to Indonesia and Thailand and more than twice as damaging as the 1994 Peso Crisis was to Mexico -- but this time on American soil.'"

While voting in future elections is likely to be the last thing on the minds of people who are struggling to rebuild their lives, Florida has nationally important elections in 2018 and 2020. Its right-wing Republican governor, Rick Scott, faces term limits and must leave office in 2018. And Florida is among the must-win states for presidential candidates.

Before Hurricane Maria, political analysts said that the vast majority of Puerto Ricans supported Democrats. Since the storm, the federal government's response has fallen short of expectations, amplified by Trump's statements there are limits to the aid provided by the federal government for an already ailing island.

"Sometimes it takes a while to get involved with local politics, and if people are still struggling to rebuild their lives, the big question is, how many of them are going to be energized to turn out to vote?" Susan MacManus, a professor at the University of South Florida in Tampa, told U.S. News and World Report. "Some within the Puerto Rican community think the impact will be immediate and really help them in the 2018 election cycle; others say maybe it'll take a little bit longer, but nobody's denying that the potential for the Democratic vote is there, that in a swing state it can affect the outcome."

In the meantime, as storm survivors across Puerto Rico, Florida and Texas (and fire survivors in California) struggle to restart their lives, you can be sure that when it comes time to vote they will remember who was on their side. Survival is arguably the most powerful motivating factor in human nature.

Steven Rosenfeld  covers democracy issues for AlterNet. He is a longtime print and broadcast journalist and has reported for National Public Radio, Monitor Radio, Marketplace,  TomPaine.com  and many newspapers. (more...)
Related Topic(s): Florida Politics; Hurricane Maria; Politics; Puerto Rico Devastation; Refugees; Voting, Add Tags
Add to My Group(s)
Go To Commenting
The views expressed herein are the sole responsibility of the author and do not necessarily reflect those of this website or its editors.