Perverse as it may seem, I as a climate justice activist am extremely glad the corrupt corporate, militarist Democratic Party leadership has repeatedly expressed its contempt for the Sunrise Movement's much-needed, potentially game-changing call for a Green New Deal. Three recent, egregious instances of that contempt are 1) Chuck Schumer's criminally insane promotion of Trump-supporting fossil fuel puppet Joe Manchin to be lead Democrat on a powerful Senate energy committee, 2) Nancy Pelosi's predictable castration of Sunrise's hoped-for committee to legislate a Green New Deal, and 3) Pelosi's equally predictable construction of an insurmountable barricade to a Green New Deal by her ardent embrace of a pay-go budget provision, recently adopted by House Democrats. 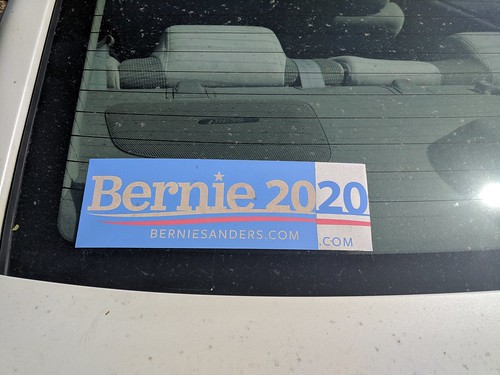 Will Bernie be the one to take up the Green New Deal vs. climate genocide referendum challenge?
(Image by gruntzooki)   Details   DMCA

What makes me so glad is that Democrats' corrupt Schumer-Pelosi leadership has taken no time whatsoever to show its cards: it clearly seeks to kill a Green New Deal. Or, at minimum, to weaken it beyond recognition, so the leadership game of serving Wall Street and Silicon Valley, the military-industrial-surveillance complex, and the Israel lobby can continue unimpeded. Absolutely clueless that the youth climate movement is different and won't be bought off with lip service, Democrats' leadership has already provoked the Sunrise Movement to strengthen its resolve.

Deeply heartened by Sunrise's refusal to be taken lightly, I see clear hope that the movement is willing to get radical and use "nuclear" political weapons against the adamantine anti-climate obstinacy of the Democratic leadership. As a veteran activist strategist, I have one such "can't miss" weapon to propose: making the 2020 election a referendum between Democrats' Green New Deal and Republicans' racist, classist climate genocide. If taken up by a popular presidential hopeful like Bernie Sanders, or by a climate-obsessed one like Washington governor Jay Inslee, this stark referendum could sound the well-deserved death knell for today's beyond-criminal Republican Party. And spell endless, politically suicidal woe for any corporate Democrat who dares oppose it.

Making the 2020 election a referendum between the party of a wildly popular Green New Deal and the party of racist, classist climate genocide ought to be an easier win for Democrats than the proverbial shooting of fish in a barrel. And far less messy. Yet, astonishingly, forcing today's deeply corrupt "Nummy Bits" Democrats (see next section) to embrace that referendum will probably require unprecedented levels of heroic movement activism. And probably the combined efforts of the Sunrise Movement and the Poor People's Campaign, both with a serious stake in making this referendum happen.

The remainder of this piece will explore why this stunning referendum would be so politically powerful and, despite that, so difficult to persuade Democrats to adopt.

In my bachelor days as "Crazy Uncle Pat," my offbeat efforts to amuse my young nieces and nephews (while amply indulging my dark, twisted sense of humor) became family legend. One favorite running gag was my ad campaign for the fictitious Nummy Bits Dog Food. Something like this: "Nummy Bits--nine out of ten dogs prefer them to starvation. Be a Nummy Bits dog!"

Presumably, seeing how "doggedly" one dog in ten embraced the lethal alternative, Nummy Bits weren't all that "nummy." And, given that Democrats insist--as doggedly and perhaps as suicidally--on promoting themselves as merely being "better than Trump," the clear implication is that Democrats themselves aren't terribly "nummy." Especially when, finding the discussion of serious, real-world issues embarrassing, Democrats fail to point out how atrocious--how utterly "un-nummy"--an alternative Trump actually is. Like, say, one bent not merely on climate genocide, but racist, classist climate genocide. As in, say, the totally preventable deaths of tens, perhaps hundreds of millions of our planet's poor people of color.

So racist and classist are the looming genocide's effects that I considered demanding Trump's impeachment over it a fitting task for the current revival of Martin Luther King's Poor People's Campaign. The Poor People's Campaign clearly had other priorities, but perhaps--since race and class figure so prominently in the impending climate genocide--it could add urgently needed muscle to the Sunrise Movement's pioneering political efforts to stave off that worst-ever crime against humanity. More on potential synergy between these important current movements later.

But for now, those of us serious about staving off climate Armageddon--and that seriousness requires supporting a Green New Deal--must face three horrifying realities that, if allowed to continue, virtually guarantee defeat for our cause. Those horrifying realities begin with a two-party system where only Republicans or Democrats can win the vast majority of elections. They also include a Republican Party so hell-bent on climate-change denial and reckless fossil-fuel expansion that it's willing to risk not merely unprecedented genocide but total human extinction--a party Noam Chomsky rightly brands "criminally insane" and "the most dangerous organization in human history."

Finally, they include a Democratic Party rendered so namby-pamby by its own corruption--by its criminal unwillingness to discuss any policy questions, no matter how urgent for humanity, no matter how damning for Republicans, that might upset its wealthy donors--that its namby-pamby self-branding merits comparison with "Nummy Bits." Except that Democrats' self-branding is far worse.

See, at least the fictitious "Nummy Bits" ad people were willing to give the alternative a properly horrifying name: starvation. Also--and what made the Nummy Bits kamikaze "ad campaign" fun--is that there were presumably lots of other competing dog foods out there willing to trumpet tastier merits than being "better than starvation." In a two-party system where Republicans truly are the only (electable) alternative, Democrats--being namby-pamby to the max--dare not point out that Republicans really are the electoral equivalent of starvation. Nor do they claim any tastier merit for themselves than "not being Trump"--whose gargantuan horror Democrats (in their donor-censored refusal to discuss humanity's life-or-death issues) refuse even to properly articulate.

For now, I'll lay down this law for Green New Deal movement activists: No Democrat (listen up, Liz Warren) who refuses to discuss the genocidal horror of Republican climate policies can be trusted as a serious, committed supporter of the Green New Deal. I'll devote the rest of this essay to explaining why.

Unspeakably loathsome is a tame description for today's Republican Party--for its politicians, billionaire supporters, and supporting media, if not necessarily for its voting base. Granted, with Democrats--pretty loathsome in their own right--as the only viable alternative, Trump's voting base can be cut a certain amount of slack for getting things so horribly wrong. Especially when the presidential-candidate face of the Democratic Party was such a corrupt, elitist, self-righteous (and possibly criminal) hypocrite as Hillary Clinton--she of the screaming "basket of deplorables" contempt for working-class voters.