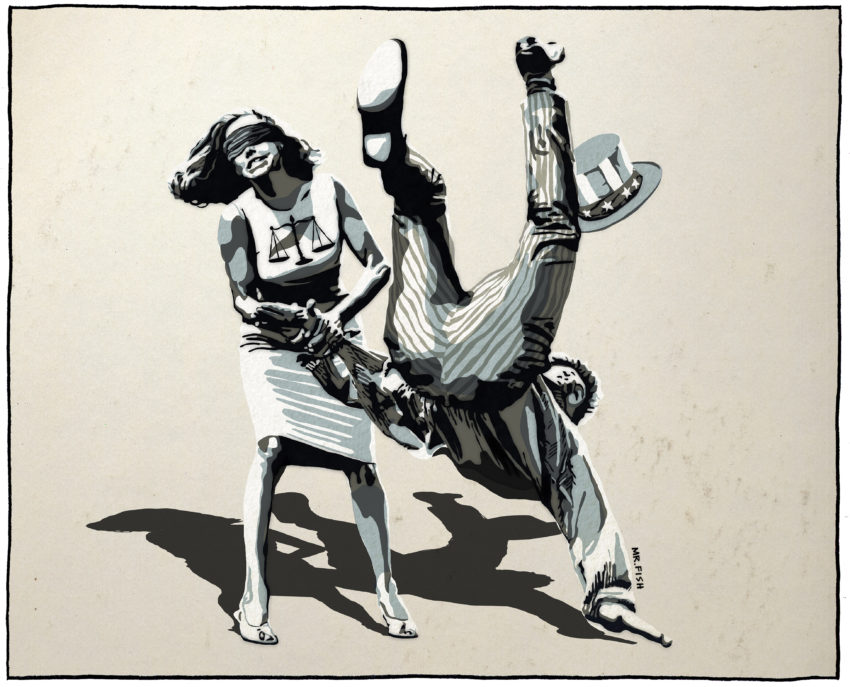 Donald Trump's ascendancy to the presidency, as Max Blumenthal points out in his meticulously researched book "The Management of Savagery: How America's National Security State Fueled the Rise of Al Qaeda, ISIS, and Donald Trump," was made possible not only by massive social inequality and concentration of wealth and political power in the hands of the oligarchic elites but by the national security state's disastrous and prolonged military interventions overseas.

From the CIA's funneling of over a billion dollars to Islamic militants in the 1970s war in Afghanistan against the Soviet Union to the billion dollars spent on training and equipping the radical jihadists currently fighting in Syria, the United States has repeatedly empowered extremists who have filled the vacuums of failed states it created. The extremists have turned with a vengeance on their sponsors. Washington's fueling of these conflicts was directly responsible for the rise of figures such as Ayman al-Zawahiri and Osama bin Laden and ultimately laid the groundwork for the 9/11 attacks. It also spawned the rabid Islamophobia in Europe and the United States that lies at the core of Trump's racist worldview and has been successfully used to justify the eradication of basic civil liberties and democratic rights.

The misguided interventions by the national security apparatus have resulted in hundreds of thousands of deaths, over 5 million desperate refugees fleeing to Europe, the destruction of entire cities, the squandering of some $5 trillion of U.S. taxpayer money, rampant corruption and criminality. The mandarins of national security, rather than blunt the rise of radical jihadism, have ensured its spread across the globe. The architects of this imperial folly have a symbiotic relationship with those they profess to hate. The two radical extremes -- the interventionists in the national security apparatus and the radical jihadists -- play off of each other to countenance ever-greater acts of savagery. The more perfidious your enemy, the more your own extremism is justified. We are locked in a macabre dance with the killers we created and empowered, matching war crime for war crime, torture for torture and murder for murder.

The binary view of the world imagined by right-wing ideologues such as Richard Pipes during the Cold War, defined as a battle to the death against godless communism, has been re-imagined by Israeli Prime Minister Benjamin Netanyahu and American neocons such as Mike Pompeo, John Bolton, Robert Kagan, Steve Bannon, William Kristol, Paul Wolfowitz and Donald Rumsfeld and leaders of the Christian right including Gary Bauer and William Bennett -- to become a battle to the death between the "barbarity" of Islam and the "civilized" ethic of the Judeo-Christian West. It is a rebranding of the Cold War, so useful to the retrograde forces of capitalism in crushing popular dissent and so profitable to the arms industry. Its most prominent voices are a bizarre collection of neofascist ideologues and quack conspiracy theorists such as Bannon, Sean Hannity, Stephen Miller and Pam Geller, who claims that Barack Obama is the love child of Malcolm X.

This ideology, like the ideology of anti-communism, erases not only history but context. Those who oppose us are removed from the realm of the rational. They are seen as incomprehensible. Their hate has no justification. They are human embodiments of evil that must be eradicated. They hate us for our "values" or because they are driven by a perverted form of Islam. The failure, as Blumenthal writes, to place these conflicts in context, to examine our own complicity in fueling a justifiable anger, even rage, dooms us to perpetual misunderstanding and perpetual warfare. Our response is to employ greater and greater levels of violence that only expand the extremism at home and abroad. This demented project, as Blumenthal writes, collapses "the fragile space where multi-confessional societies survive." It bifurcates political space into competing forms of extremism between the jihadists and the counter-jihadists. It creates a strange and even comforting "mutually reinforcing symbiosis" that depends "on a constantly escalating sense of antagonism."

The methods used on a wary public by the national security state, especially the FBI and the intelligence agencies, to justify and advance these wars are increasingly unsavory. Muslims, many suffering from emotional and mental disabilities, are baited by law enforcement into "terrorist" plots that few of them could have conceived or organized on their own. The highly publicized arrests and quashing of these nascent "terrorist plots" exaggerate the presence of radical jihadists within the country. They keep fear high among the U.S. population. Trevor Aaronson, the author of "Terror Factory: Inside the FBI's Manufactured War on Terror," found that nearly half of all terror prosecutions between Sept. 11, 2001, and 2010 involved informants, including some with criminal backgrounds who were paid as much as $100,000 by the FBI. Aaronson noted that during the last year of the George W. Bush administration the government did not prosecute anyone arrested in a terrorist "sting." But such stings exploded under Barack Obama, a tactic that Blumenthal writes was "designed to cast his administration as just as tough on terror as any Republican" -- the Obama administration "announced an arrest resulting from a terrorism sting every 60 days." This suggested, Aaronson writes, "that there are a lot of ineffective terrorists in the United States, or that the FBI has become effective at creating the very enemy it is hunting."

The longer and more confusing the "war on terror" becomes, nearly two decades on, the more irrational our national discourse becomes. The paranoid and racist narratives of the far right have poisoned the mainstream dialogue. These racist tropes are repeated by the White House, members of Congress and the press.

"Islamophobia had become the language of a wounded empire, the guttural roar of its malevolent violence turned back from the sands of Iraq and the mountain passes of Afghanistan, and leveled against the mosque down the turnpike, the hijabi in the checkout line, the Sikh behind the cash register -- the neighbors who looked like The Enemy," Blumenthal writes.

Far-right parties are riding this rampant Islamophobia, fueled by the catastrophic failures in the Middle East, to power in Germany, Italy, France, Britain, Sweden, Poland and Hungary. This toxic hatred is also a central theme of the Trump administration, which demonizes Muslims, especially Muslim refugees, and seeks to bar them from entering the United States.

The arrival of millions of Muslim refugees in Europe from states such as Libya, Syria (which alone has produced a million refugees in Europe), Iraq and Afghanistan has dramatically bolstered the appeal of European neofascists. Nearly 73 percent of those who voted in Britain for the nation to leave the European Union cited the arrival of immigrants as their most important reason for supporting the referendum.

The radical jihadists have long expressed a desire to extinguish democratic space in the West. They are aware that the curtailment of civil liberties, evisceration of democratic institutions, especially the judicial system, and overt hatred of Muslims, push Muslims in the West into their arms. Such conditions also increase the military blunders of the United States and its allies abroad, providing jihadists with a steady supply of new recruits and failed states from which they can operate. Their strategy is working. In the year before the 2016 presidential election, violence against Muslims in the United States soared, including shootings and arson attacks on mosques. Public disapproval of Muslims, according to opinion polls, is at a record high.

The Democratic Party, signing on to the forever crusade by the national security state in the name of humanitarian intervention, is as complicit. The Obama administration not only accelerated the sting operations in the United States against supposed terrorists but, in its foreign operations, increased the use of militarized drones, sent more troops to Afghanistan and foolishly toppled the regime of Moammar Gadhafi in Libya to create yet another failed state and safe haven for jihadists.

The radical jihadists, in an irony not lost on Blumenthal, are often deliberately armed and empowered by the U.S. national security apparatus, along with Israel, as a way to pressure and topple regimes deemed antagonistic to Israel and the United States. Obama's secretary of state, John Kerry, in audio leaked from a closed meeting with Syrian opposition activists, admitted that the U.S. had used Islamic State as a tool for pressuring the Syrian government. He also acknowledged that Washington's complicity in the growth of IS in Syria was the major cause for Russian intervention there.

In a 2016 op-ed titled "The Destruction of Islamic State Is a Strategic Mistake," Efraim Inbar, the director of the Begin-Sadat Center for Strategic Studies, argued that "[t]he West should seek the further weakening of Islamic State, but not its destruction." He said the West should exploit IS as a "useful tool" in the fight against Iran and its proxy, Hezbollah. "A weak IS is, counter-intuitively, preferable to a destroyed IS," Inbar concluded. Inbar went on to argue for prolonging the conflict in Syria, saying that extended sectarian bloodshed would produce "positive change."

Related Topic(s): Complicity; Muslims; Terror Alert Distractions; Torture, Add Tags
Add to My Group(s)
Go To Commenting
The views expressed herein are the sole responsibility of the author and do not necessarily reflect those of this website or its editors.