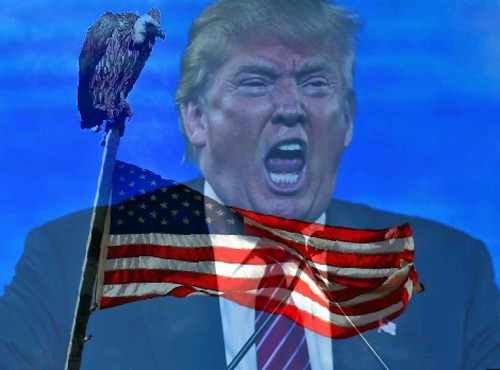 I wrote this piece way back in May of 2012. It foretold the current political scenario. So bear with me as I offer article again, and you'll see the evidence for my claim. My current updates are highlighted in italics.

"Senator Richard Lugar of Indiana was recently defeated by a Tea Party-backed candidate, Richard Mourdock. Mr. Muordock had this to say, "Bipartisanship ought to consist of Democrats coming to the Republican point of view." Irrational enough for you? Oh, there's so much more. The Republican party is mired in irrational and maladaptive behaviors. Read on.

"This is an excerpt from Dick Polman, Philadelphia Inquirer National Political Columnist, quoting Thomas Mann and Norman Ornstein, who have spent over 40 years in Washington and are considered the nation's most prominent analysts of Senate behavior, "As the storm clouds darkened over Lugar, they warned that "divided government has produced something closer to complete gridlock than we have ever seen in our time in Washington."

"In our past writings, we have criticized both parties when we believed it was warranted. Today, however, we have no choice but to acknowledge that the core of the problem lies with the Republican Party. The GOP has become an insurgent outlier in American politics. It is ideologically extreme; scornful of compromise; unmoved by conventional understanding of facts, evidence and science; and dismissive of the legitimacy of its political opposition. When one party moves this far from the mainstream, it makes it nearly impossible for the political system to deal constructively with the country's challenges."

And this from AlterNet by Martin Longman on May 12, 2012, "Today's GOP: Worst Political Party Since the Civil War. The last time things got this bad was about 150 years ago -- and we needed a Civil War to resolve it."

Mr. Longman also quotes Thomas E. Mann and Norman J. Ornstein who recently wrote a column for the Washington Post with a provocative headline: "Let's just say it: The Republicans are the problem." Their thesis was that they had never, in 40 years of observing Congress, seen the institution behave in such a dysfunctional manner. They wrote that while they had long found reasons to be critical of both Democrats and Republicans, things have changed, and our current crisis is solely the fault of a Republican Party that "has become an insurgent outlier in American politics. It is ideologically extreme; scornful of compromise; unmoved by conventional understanding of facts, evidence and science; and dismissive of the legitimacy of its political opposition."

But why would the Grand Old Party be so maladaptive at this point in time? Leon Festinger, an American social psychologist, might have offered us a reason via his theory of Cognitive Dissonance. This theory proposed that when beliefs intrinsic to one's own behaviors or those of valued models remain undisturbed and then are challenged, the result can be irrational and maladaptive behaviors.

The valued Conservative model is being disturbed in trumps!

And by Donald Trump, the apparent, authoritarian, presidential candidate. His irrational and maladaptive behaviors rain down daily in news reports. And so do the leaders of the party as they contort themselves into twisted pretzel-like positions.

So what is this valued Conservative model that's being disturbed? From George Lakoff, "The way to understand the conservative moral system is to consider a strict father family. The father is The Decider, the ultimate moral authority in the family. His authority must not be challenged. His job is to protect the family, to support the family (by winning competitions in the marketplace -- think of Trump's constant claims of victories, winners and losers), and to teach his kids right from wrong by disciplining them physically when they do wrong. The use of force is necessary and required. (physically attack those who disagree -- "I'll pay your legal fees") Only then will children develop the internal discipline to become moral beings. And only with such discipline will they be able to prosper. And what of people who are not prosperous? They don't have discipline, and without discipline, they cannot be moral, so they deserve their poverty ("Mexicans are rapists, thieves, and drug dealers"). The good people are hence the prosperous people. Helping others takes away their discipline, and hence makes them both unable to prosper on their own and function morally."

Hopefully, as the sun sets on this model, we will find a new and more humane understanding of the human condition that works for everyone. Wishful thinking on my part? Maybe not. Maybe Trump is the last gasp of a party that lost its way decades ago and just hasn't had enough of the imaginary strength of character they admire so much. Maybe they haven't been able to face up to their own maladaptive behavior. Stay tuned -- film at eleven!

Related Topic(s): AlterNet; CHARACTER; Crisis; Donald Trump Supporters; Government; Gridlock; History Of; People; Republican; Strength; (more...) Time; Trump Campaign; Winning, Add Tags  (less...)
Add to My Group(s)
Go To Commenting
The views expressed herein are the sole responsibility of the author and do not necessarily reflect those of this website or its editors.