Click Here to Remove All Ads
By Dave Lindorff 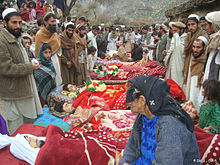 Now that the flags are back waving from the tops of flagpoles across the country, and the maudlin paeans to the close to 3000 lives lost in the airplane attacks on the World Trade Center and the Pentagon on Sept. 11, 2001, it's time we gave a thought to the dead who were ignored.

According to very conservative estimates, as reported by the "Costs of War" project of Brown University's Watson Institute on International and Public Affairs, nearly 250,000 civilians have been killed during the a8 years since September 2001 in Iraq, Afghanistan and Pakistan in wars or attacks that were instigated by the United States.

Those are very conservative figures carefully compiled by organizations like Iraq Body Count, the Pakistan Institute for Peace Studies. These numbers are people known to have died in the violence of war, mostly as so-called "collateral damage," but often deliberately, as when the US bombs a hospital, a wedding or a private housing compound in order to kill some targeted individual considered an "enemy combatant," unconcerned about the others in the area, often women and children, who are almost certain to die or suffer serious injury as the result of a strike.

The numbers do not include the deaths that also stem from America's post 9-11wars things like starvation, deaths from lack of medical care, and especially deaths from diseases like typhus or dysentery caused by lack of access to clean water or adequate sanitation facilities.

It is scandalous that the US government does not publish accurate information about the mayhem and slaughter that its wars have caused, especially because it is precisely because of the US extensive use of airpower, including remotely piloted drones as a means of keeping politically dangerous US military casualties in the so-called "War on Terror" at a minimum that produce so many civilian casualties.

Reporters who want to learn about civilian casualties from these US wars must either take the dangerous step of going to the battle zones without US official backing (what is called embedding with American forces a set-up that keeps the military in control of access and message), or rely on reports from NGOs that monitor such things.

According to some accounts, civilian deaths caused by America's permanent war in the Middle East since 2001 could exceed one million.

Related Topic(s): Afghanistan War; America Culture Of Violence; American Empire; American Hypocrisy; Drone Wars; Endless War; Iraq War; War Crimes; War Crimes; War On Terror, Add Tags
Add to My Group(s)
Go To Commenting
The views expressed herein are the sole responsibility of the author and do not necessarily reflect those of this website or its editors.