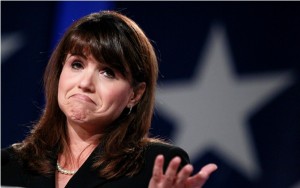 What is it with Female Tea Baggers and Witchcraft? In 2008 it was revealed that Sarah Palin's home church in Wasilla held a special ceremony during which a visiting Kenyan (!) Bishop laid hands on her and asked Jesus Christ to protect her from every form of witchcraft. Oops -- seems the blessing of protection didn't work because Sarah was bewitched into endorsing admitted Black Art practitioner-wannabe Christine O'Donnell (Teabagger/Delaware) for Senate.

Watch out Sarah, Something Wacky This Way Comes. There's a new Sorceress in town. She's a 41-year-old virgin and she might be after your title of "Wicked Witch of The Republican Party!"

How powerful is her mojo? Well, we know she has the eye of Newt and the ear of Glenn Beck for starters. After magically securing the nomination, she whispered to her familiar and whoosh! up popped a million dollars to power her all the way to Capitol Hill. So strong is her dark magic she managed to survive and thrive without income or employment for over five years. This occult oddball tickled her bag of tricks and made a college degree appear on her wall out of thin air. With captivating craftiness she charmed Delaware voters into casting their ballots in her favor over Republican-but-otherwise-normal political veteran Mike Castle in the primary.

And, this modern Morgana magically induced amnesia in these same voters and made them forget her incoherent ramblings about the dangers presented by scientists who have used stem cells to create . . . (wait for it) . . . mice with human brains!!! Can you imagine? An army of sentient mice taking revenge on house cats and humans everywhere . . . like a morbid, spooky manifestation of Tom and Jerry cartoons . . .

And now she's even enchanted the very bland, beige, and mainstream Good Christian Congressman Mike Pence of Indiana to defend her right to wax witchy! It's okay, though, because she didn't actually join a coven, according to the video aired on Bill Maher's show Friday. Whew! For a second there I thought there was something to worry about, like maybe she was completely crazy.

The biggest giggle in this bizarro story is that Pence just won the "Values Voters" straw poll pick for President in 2012 right before he gave the nod to the nascent necromancer! Hmmmm . . . Are these folks some kind of neo-gothic, Black Art-worshipping variety of Values Voters I've never heard about? I thought they were Christians!!! Really Committed Christians!!

If she keeps tossing out gems like her belief there are human mice scampering around secret government labs, her "pray away the gay" ministries, and those Satanic bloody altars, we won't need a crystal ball or Ouija board to predict the outcome of the Delaware Senate Race.

Kathy never expected a career in radio as a talk show producer. Born and raised in Atlanta, Georgia, Kathy was completing her nursing degree when in 2001 - in an emergency - she was asked to fill in as the producer of Mike's program. Within a few (more...)
Related Topic(s): Christine O-donnell; Republican; Teabaggers; Witchcraft, Add Tags
Add to My Group(s)
Go To Commenting
The views expressed herein are the sole responsibility of the author and do not necessarily reflect those of this website or its editors.