This article is the follow-up to my OpEdNews piece "How the Rats Revolt: Targeting Democrats' Electoral Extortion," where I gave my take on the symbolism and overall strategy of a potential Rats' Revolt. Here I explore the tactics needed to execute that strategy, focusing on why Democrats' Senate Minority Leader Chuck Schumer, as a high-powered but low-profile Democrat "Teflon don," would make a superb (though hardly exclusive) target for our movement's "ratting out" tactics. 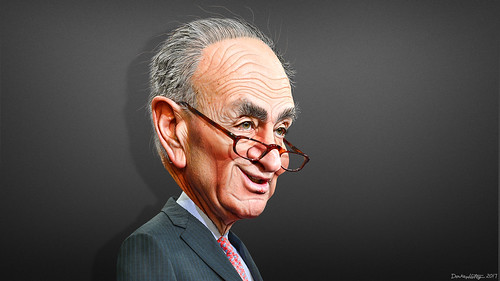 Let's start by examining a crucial point: why any political movement hoping to have impact--above all, to have revolutionary impact--must artfully dodge liberals' well-laid trap of "disgraceful civility."

Liberal is a degraded word, today reduced to meaning little more than "supporters of the Democratic Party." But liberals (meaning Democrat supporters) hardly consider themselves as degraded as the word designating them; in a time of barbarous political discourse--above all, from Trump and his supporters--they proudly preen themselves on their "civility."

Thus, for example, liberals love to quote their "classy" icon, former First Lady Michelle Obama, who said, "When they go low, we go high." Which astute antiwar comedian George Carlin, were he alive today, would probably translate as "When they use ground troops, we use drones." Civility, as we shall see, covers a multitude of sins.

Having a notorious crude side--as political comedians skewering official pomposity, hypocrisy, and lying inevitably must--Carlin would likely not have ended his icon-puncturing takedown of "Lady Michelle" right there. It's easy to imagine him adding, "What she really should have said was, 'When they go low, we go down on them.'"

Much as liberal "civility" fans might now need defibrillators, Carlin would have been right. To any well-informed person with a functioning moral compass, it's hard to imagine anything more degrading, anything less ladylike, than Michelle Obama's obscene, obsequious public embrace of unrepentant war criminal George W. Bush. She could not have degraded herself more had she publicly "made like Monica Lewinsky" with every man present. Yet no Democrat--nor even Democrats' outsider voice of progressive conscience Bernie Sanders--has had the moral compass and political courage to condemn her.

Michelle Obama did nothing less than lend her "classy" evening cloak of respectability to past atrocities, abetting our bipartisan political elite's perpetual game of "disappearing" their most criminal, morally outrageous acts into our collective "memory hole." Sins unrepented are sins repeated, and Michelle Obama's "civility" to the reprehensible cretin Bush simply cements in place our mindless bipartisan commitment to endless, unjust, unspeakably costly, and climate-unfriendly U.S. militarism. It's totally appropriate to speak in this context--and in the far larger one of U.S. politics generally--of "disgraceful civility."

No contemporary movement has more pathetically--or more tragically, considering its humongous potential--succumbed to the "disgraceful civility" trap than today's spineless, bloodless revival of Martin Luther King's Poor People's Campaign (PPC). If you read the banner of the PPC's website (in the link I just supplied), you won't see the "spineless" and "bloodless"; you're likely to be duped--as I was--into seeing only the humongous potential. After all, what could be more relevant to contemporary activism than a potentially huge coalition--drawing instant respect and credibility by adopting the mantle of national hero King--dedicated to fighting King's "triple evils" of poverty, racism, and militarism and oh so correctly updating them by including "environmental devastation" as a fourth evil? Climate justice activists like me could easily be forgiven for seeing in today's PPC the de facto climate justice movement we were desperately seeking--only with a far better known and popular brand name than "climate justice." And seizing the huge PR advantage of forming in the fiftieth anniversary year of King's assassination to boot.

Sadly, American politics is currently so fake that we even have a fake Poor People's Campaign. And what makes it so fake is precisely its respectable fear of denouncing the respectable fakery of Democrats' political establishment. Hell will freeze over before you'll ever hear today's "antimilitarist" PPC denouncing Michelle Obama's disgraceful embrace of war criminal Bush, as you've heard here. Or before the "antimilitarist, antipoverty, antiracist" PPC denounces Democrats' commitment to outrageous military spending for robbing the dark-skinned poor, as you'll routinely read in Black Agenda Report (see here, for example). Denouncing the Democratic establishment's respectable fakery is a guaranteed one-way ticket to political pariah status, as evidenced by my own lifetime ban (without explanation or recourse) from Facebook. Or by the totally unjustified smear of the courageous, principled leftists at Black Agenda Report as Kremlin agents.

It's one thing to fear Republicans' ever more dangerous rejection of reason under Trump; Chris Hedges' phrase "the cult of Trump" captures the matter splendidly. It's quite another thing for a self-proclaimed moral movement, from fear of aiding Republicans (and doubtless from fear losing respectability with Democrats' "fake Resistance" and their supporting smear media) to corrupt its own moral mission by practicing "disgraceful civility" toward Democrats' most egregious moral infractions.

The PPC's disgraceful civility toward Democrats is much like the code of silence (omerta) protecting the mafia. It says a lot about the extortion power of today's Democratic Party (and its smear machine) that it can strong-arm even a revival of King's PPC into its "mob." Which brings us--at long last--to Chuck Schumer, Democrats' low-profile "Teflon don."

Related Topic(s): AIPAC; Chuck Schumer; Civility; Climate; Corruption; Democratic; Democrats DNC; Democrats In Name Only Dinos; Establishment; Israel; (more...) Lesser-evil; Liberals; Mafia; Michelle; Pro-israel; Revolt; Schumer-Charles; Strategy, Add Tags  (less...)
Add to My Group(s)
Go To Commenting
The views expressed herein are the sole responsibility of the author and do not necessarily reflect those of this website or its editors.

STAY IN THE KNOW
If you've enjoyed this, sign up for our daily or weekly newsletter to get lots of great progressive content.
Series: "Slashing the Gordian Knot of Lesser-Evil Voting"