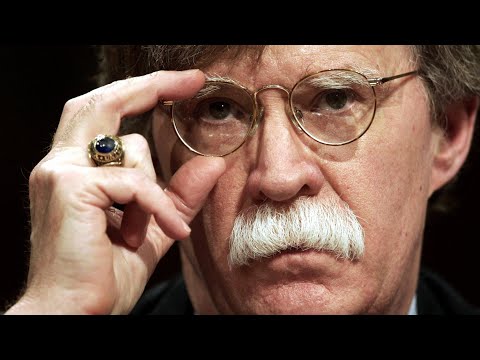 Let us all please, please understand: John Bolton is a war criminal, one of the most loathsome wretches ever vomited up by the corrupted, militarized power structure of the US elite. He happily, gladly, giddily went to work for Trump, knowing he was a corrupt, racist, authoritarian scumbag. His only objection to Trump was that the feckless casino boss was not quite as murderously, berserkly war-like enough to satisfy Bolton's lifelong perversion for mass murder.

Remember also: it was Bolton who, snuffling and shuffling as Trump's dogsbody, personally eliminated the government's pandemic response team. He was happy to act as Trump's point man in surrendering the American people to the ravages of a far more deadly foe than the Iranians, Russians and Chinese who goose Bolton's creepy night-dreams. He's not part of the "Resistance," he's not a hero, he's not an ally; he would very happily see your children burned alive in a worldwide conflagration to satisfy his extremist blood-lust. And his stupid little self-fluffing book -- offering up tidbits that he cravenly refused to provide in the impeachment process, when it might have done some good -- is nothing but a slobbering grab for big money by an ignorant goober who will probably die the same way Josef Mengele did: choked on a hairball from anxiously chewing the ends of his ludicrous moustache.

Sons of the South: Juneteenth and the Enduring Shackles of Racism

As many are pointing out today on Juneteenth, the formal ending of slavery did not mean an end to peonage for Black Americans. The rich and powerful worked closely with law enforcement to thrust multitudes of African-Americans back into forced labor, for generations. The elite manipulated the courts and prison systems to ensure a steady supply of cheap or free labor to replenish the fortunes they'd made from slavery, and to build the "New South" where Jim Crow reigned supreme. Many years ago, I read an excellent book on the subject, "Worse Than Slavery," by David Oshinsky. Several more good histories have been written since. After reading the book, I wrote the song below, recorded here in a rough form four or five years ago. I'd probably do it differently now, but here it is, for whatever it's worth.

When you are ruled by unconscionable wretches, this is what happens. And the Georgia vote debacle was a deliberately designed test run for the November election. As I've said for months, there is not going to be anything remotely like a fair and open election across much of the country. The GOP vote-suppression machine has been growing wider and more brazen year after year. The Democratic leadership has watched it happen and done almost nothing about it, never made it a signature issue; they've never gone to the mat to fight with everything they've got to ensure that voters can have their say -- even when the voters being disenfranchised by hook, crook and "breakdown" overwhelmingly vote Democratic.

While Obama spent *years* seeking his "grand bargain" with the GOP to cut Social Security and Medicare in exchange for some watered-down social programs, the GOP were shutting down literally thousands of polling places in Democratic districts, throwing hundreds of thousands of Democratic-leaning voters off the rolls in state after state, and imposing draconian "Voter ID" targeted at the poor.

Now we are reaping the whirlwind -- and now, only now, are some Dem leaders beginning to ... yes, do that thing they do so well: talk about maybe doing something possibly about it at some point. The fact is, if the November vote is to be saved at all, it will have to be saved by people and groups like those in this story, who go to the front-lines and help facilitate the process for those being suppressed, who stand their ground against illegal police intimidation when they exercise their rights: by people who DO something, not those who make empty gestures with Kente cloth while allowing an authoritarian criminal to loot the country in front of their eyes (Yes, again: why has Trump not been impeached for his vast, open, undeniable financial crimes and corruption? Why? Why? Why?) and allowing a party of rabid extremists to destroy the democratic process itself. Our only hope lies in the people in this story -- and in the hundreds of thousands of people now on the streets of America, demanding action, not willing to be fobbed off any longer with mewling promises of incremental "reform" somewhere down the line.

We Are Devo: the UK's Barbaric, Trump-like Embrace of Mass Death

As I said before: Johnson is going to go Full Trump and simply surrender to the virus, which is what he's wanted to do from the very beginning. We're just going to have to live in a Covid-riddled world, and hope for the best. And yes, this might end up all right for most of us; but we must also steel ourselves to say goodbye to a goodly proportion of friends and loved ones with ill health or advanced age long before they should have left us. But our leaders don't care about that. Johnson and his gaggle of greed-blinded ministers have already overseen a viciously brutal culling of the most vulnerable among us, as they consigned tens of thousands to die in care homes -- the same care homes sold off to callous investors by Tory profiteering extremists over the past 10 years. It's often said that the true moral value of a society is shown in how it treats its most vulnerable members. There is evidence of the most primitive humans and even Neanderthals caring tenderly for the sick and damaged among them, not regarding them as burdens but as loved, valued members of the tribe. What we are seeing today in modern Britain (and modern America) is a staggering degeneration of these ancient values; a dearth of empathy that would have profoundly shocked our ancestors.

A Shrivelled Soul in a Bag of Bluster: BoJo, the World's Most Racist Clown

A man who calls black people, in print, "piccaninnies" with "watermelon smiles" etc. - vile racist terms - now calls for some kind of undefined "inquiry" into ... racism. This vague notion was "announced" not by the government, but in a small article in a right-wing newspaper that has paid the slur-slinger hundreds of thousands of pounds over the years to spew a barrage of demonstrable lies. But even in grudgingly floating the "inquiry" idea, the Man Who Speaks Racism in Print for Pay makes sure to belittle the effects of racism. He says he wants the dark people he disparages for money to get over their "sense of victimization." That's the real problem, you see; those people FEEL like they're victims. They're suffering from the self-inflicted wound of "victimization," not the objective, lived reality of systemic racism. If they'd just stop doing that to themselves, why then, we'd see those wonderful "watermelon smiles" again, not all these nasty protests! (Of course, the most violent protest, by far, has been the hours-long riot in the center of London by right-wing mobs who feel and speak about blacks the same way the prime minister does.

Related Topic(s): Democratic; Election; Impeachment; John Bolton Warmonger; Plutocracy; Racism; Trump, Add Tags
Add to My Group(s)
Go To Commenting
The views expressed herein are the sole responsibility of the author and do not necessarily reflect those of this website or its editors.