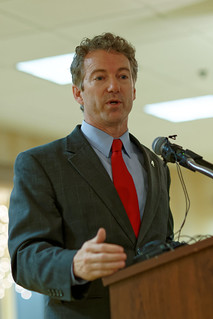 As the 2016 Republican presidential hopefuls continue to pummel each other, many Americans wonder if there is a GOP candidate who expresses common sense on any key issue. At the moment, the sole GOP presidential candidate who meets this criterion is Kentucky Senator Rand Paul when he speaks about national security. Unfortunately, Paul is also a bigot.

The most recent Huffington Post summary of Republican Candidate Polls shows a tightly bunched group. The top five are Wisconsin Governor Scott Walker (13.3 percent), Florida Senator Marco Rubio (13.1 percent), former Florida Governor Jeb Bush (10.3 percent), retired neurosurgeon Ben Carson (9.4 percent), and Rand Paul (9.2 percent). Senator Paul has not been able to move clear of the pack. Perhaps this is due to lack of funding; unlike the other top contenders, he hasn't been able to attract a billionaire "sugar daddy."

Although known as a Libertarian, in 2016 ish,' which means I have some libertarian impulses."

Rand Paul displays these "libertarian-ish" tendencies when he addresses foreign policy and national security. Senator Paul recently blamed his own Party for the decline of Iraq and the rise of the Islamic State (ISIS): "ISIS exists and grew stronger because of the hawks in our party who gave arms indiscriminately," Paul is at odds with most Republicans as he, "favors less military intervention abroad, wants a dramatic reduction in U.S. money to foreign governments and stands in opposition to the Patriot Act and the U.S. policy behind drone strikes."

At the end of May, Senator Paul led the charge against renewing the Patriot Act in the Senate. Recently, when interviewed by John Stewart, Paul said his opposition to mass surveillance is consistent with his Libertarian principles, "fighting for the Bill of Rights."

However, when it comes to domestic policy, Rand Paul has dropped most of his libertarian stances (such as ending the Federal Reserve) and, in the competition for the Republican presidential nomination, sounds like a run-of-the-mill conservative. He opposed the bank bailout, the 2009 economic stimulus package, and the bailout of General Motors. Senator Paul opposesWall Street oversight. He describes himself as a classic "free market" conservative, who believes a corporation is a person. He opposes increasing the minimum wage. His answer to income inequality is changing the income tax system to a flat tax, stating: "What the Republicans offer is less tangible than a government check. The promise of equalizing opportunity through free markets, lower taxes, and fewer regulations doesn't arrive in a mailbox at the first of the month"

Rand Paul opposes Obamacare and promises that, if elected, he would repeal it and replace it with "freedom." In fact, on most economic issues Senator Paul's response is "freedom."

Senator Paul attempts to paint himself as an environmentalist: "You'll find I'm a tree hugger, literally .".". I'm a Republican who wants clean air, clean water, and the life-extending miracle of electricity." Nonetheless, He's a climate change denier. He believes the science is "not conclusive," adding he's "not sure anyone exactly knows why" the climate is changing.

To say the least, Rand Paul is a mixed bag. But it's on civil rights that he's most dangerous. When interviewed by John Stewart, Paul reiterated his support for "religious freedom." This sounds good but coupled with his support of unbridled property rights it guarantees the right to discriminate.

During a 2012 CNN interview Rand Paul said: "There are things that people were concerned about that were unintended consequences [of the Civil Rights Act], for example, people who believe very fervently in people having equal protection under the law, and are against segregation and all that, still worried about the loss of property rights" The point is that its not all" about race relations, it's about controlling property, ultimately."

Paul believes it is illegal to impose racial integration in the private sector and opposes affirmative action.

In addition, Paul is against same-sex marriage and has opposed equal protection for the LGBT community.

Bob Burnett is a Berkeley writer. In a previous life he was one of the executive founders of Cisco Systems.
Related Topic(s): Bailout; Bigotry; Climate; Economic; Freedom; Inequality; Libertarian; Libertarian Party; Libertarianism; Rand Paul; (more...) Rand Paul; Republican; Segregation, Add Tags  (less...)
Add to My Group(s)
Go To Commenting
The views expressed herein are the sole responsibility of the author and do not necessarily reflect those of this website or its editors.