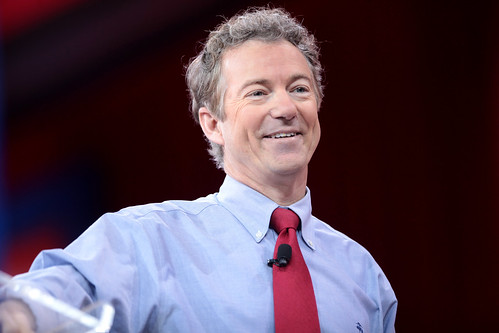 ON SUNDAY'S Face the Nation, Sen. Rand Paul was asked about President Trump's accusation that President Obama ordered the NSA to wiretap his calls. The Kentucky senator expressed skepticism about the mechanics of Trump's specific charge, saying: "I doubt that Trump was a target directly of any kind of eavesdropping." But he then made a broader and more crucial point about how the U.S. government spies on Americans' communications -- a point that is deliberately obscured and concealed by U.S. government defenders.

Paul explained how the NSA routinely and deliberately spies on Americans' communications -- listens to their calls and reads their emails -- without a judicial warrant of any kind:

"The way it works is, the FISA court, through Section 702, wiretaps foreigners and then [NSA] listens to Americans. It is a backdoor search of Americans. And because they have so much data, they can tap -- type Donald Trump into their vast resources of people they are tapping overseas, and they get all of his phone calls.

"And so they did this to President Obama. They -- 1,227 times eavesdrops on President Obama's phone calls. Then they mask him. But here is the problem. And General Hayden said this the other day. He said even low-level employees can unmask the caller. That is probably what happened to Flynn.

"They are not targeting Americans. They are targeting foreigners. But they are doing it purposefully to get to Americans."

Paul's explanation is absolutely correct. That the NSA is empowered to spy on Americans' communications without a warrant -- in direct contravention of the core Fourth Amendment guarantee that "the right of the people to be secure in their persons, houses, papers, and effects, against unreasonable searches and seizures, shall not be violated, and no Warrants shall issue, but upon probable cause" -- is the dirty little secret of the U.S. Surveillance State.

As I documented at the height of the controversy over the Snowden reporting, top government officials -- including President Obama -- constantly deceived (and still deceive) the public by falsely telling them that their communications cannot be monitored without a warrant. Responding to the furor created over the first set of Snowden reports about domestic spying, Obama sought to reassure Americans by telling Charlie Rose: "What I can say unequivocally is that if you are a U.S. person, the NSA cannot listen to your telephone calls ... by law and by rule, and unless they ... go to a court, and obtain a warrant, and seek probable cause."

Related Topic(s): American Hypocrisy; Rand Paul; Spying; Surveillance; Warrantless Searches, Add Tags
Add to My Group(s)
Go To Commenting
The views expressed herein are the sole responsibility of the author and do not necessarily reflect those of this website or its editors.