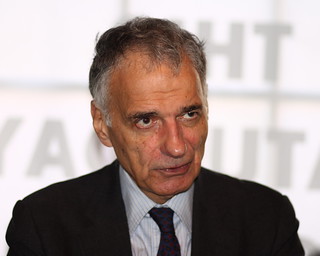 Polls have opened in West Virginia, where Vermont Senator Bernie Sanders and Hillary Clinton are vying for the 29 delegates up for grabs. Eight years ago, Clinton won West Virginia in a landslide, beating Barack Obama by 40 percentage points -- but many polls project Sanders will win today. We speak to longtime consumer advocate and former presidential candidate Ralph Nader, who argues that Sanders would be winning the primary race if every state had open primaries.

AMY GOODMAN: We're on the road today in Minneapolis, Minnesota, headed to Cambridge, Massachusetts. Well, polls, though, have opened in West Virginia, where Vermont Senator Bernie Sanders and Hillary Clinton are vying for the 29 delegates up for grabs. Eight years ago, Hillary Clinton won West Virginia in a landslide, beating Barack Obama by 40 percentage points. But many polls project Sanders will win today. Clinton has faced widespread criticism in West Virginia after she recently said, quote, "We're going to put a lot of coal miners and coal companies out of business." While Clinton maintains a lead in both pledged and superdelegates, Sanders is vowing to continue his fight to the Democratic National Convention in July.

SEN. BERNIE SANDERS: There are nine more primaries and caucuses remaining, tomorrow one in West Virginia. We hope to win there. And then on June 7th, there is the big day, because it's New Jersey and California. And if we can win here in New Jersey and win in California and win in some of the other states, and if we can win a majority of the pledged delegates, we're going to go into Philadelphia and the Democratic convention and expect to come out with the Democratic nomination. So don't let -- don't let anybody tell you this campaign is over. We're going to fight for the last vote we can find in New Jersey and California.

AMY GOODMAN: Over the weekend, Hillary Clinton urged Bernie Sanders to help unify the Democratic Party. She spoke on CBS.

HILLARY CLINTON: I'm 3 million votes ahead of Senator Sanders, nearly 300 pledged delegates ahead of him. He has to make his own mind up, but I was very heartened to hear him say last week that he's going to work seven days a week to make sure Donald Trump does not become president. And I want to unify the party. I see a great role and opportunity for him and his supporters to be part of that unified party, to move into not just November to win the election against Donald Trump, but to then govern based on the progressive goals that he and I share.

AMY GOODMAN: For more, we're joined by former presidential candidate and longtime consumer advocate Ralph Nader. His recent piece for The Huffington Post headlined "The Need for Progressive Voices." His forthcoming book, Breaking Through Power: It's Easier Than We Think.

Ralph, welcome back to Democracy Now! Talk about the state of the presidential race today.

RALPH NADER: Well, the state is that the corporatist and militarist Hillary Clinton is making a premature boast of victory. The only reason she's ahead is because of two anti-democratic systems: one, the unelected superdelegates, her cronies, mostly, in Congress, who were elected by nobody to be delegates -- they were appointed; and second, the closed primaries. Primaries are paid by taxpayers; they should not be closed to independent voters. And if independent voters could have voted in these primaries, Bernie Sanders would have defeated Hillary Clinton. In fact, in one Tuesday a couple weeks ago, he lost four primaries, in Pennsylvania, Delaware, Connecticut, because of closed primaries. The one that was open to independent voters, in Rhode Island, he won. So, I wouldn't be as boastful as Hillary Clinton.

She's got to divulge her transcripts. The Wall Street Journal just reported that she is getting more money from Wall Street than all other candidates combined, in the Republican and Democratic Party, running for president. And that's one reason why she has to divulge those transcripts, which she had her sponsors, the big bankers and other closed business conventions, pay a thousand dollars each for a stenographer to write -- to have these stenographic transcripts. So she's got them. And she's got to divulge them, so the American people can see how she says one thing in closed doors to the business lobbyists and another thing sweet-talking the public and mimicking the language of Bernie Sanders.

AMY GOODMAN: I want to turn to Hillary Clinton's press secretary, Brian Fallon, who was speaking on CNN in April.

BRIAN FALLON: One week ago today, in this very chair, Tad Devine from the Sanders campaign was sitting here talking to you, and you asked him, "You know, why didn't Senator Sanders decide to run as an independent? Why did he decide to run through the Democratic primary?" And Tad Devine said that for a very simple reason, he decided to run as a Democrat: He did not want to be a Ralph Nader, he did not want to be a spoiler. If he didn't win the Democratic nomination, he didn't want to spoil the chances for the Democrats to retain the White House.

I'm afraid that if the attacks in the style of yesterday's baseless accusation continue, that that's exactly what he'll be doing. And this has been an extraordinary effort that the Sanders campaign has embarked upon. They've brought so many people into the process. But yesterday, the tone of the attacks was suggesting that if the Democratic Party doesn't see fit to nominate Bernie Sanders, then it's not a party worth supporting. And that is poisonous rhetoric that would seriously imperil our party's ability to come together in these closing weeks.

Democracy Now!  is a national, daily, independent, award-winning news program hosted by journalists Amy Goodman and Juan Gonzalez. Pioneering the largest public media collaboration in the U.S., Democracy Now! is broadcast on (more...)
Related Topic(s): Bernie Sanders; Democratic; Politics; Polls; Primaries; Ralph Nader, Add Tags
Add to My Group(s)
Go To Commenting
The views expressed herein are the sole responsibility of the author and do not necessarily reflect those of this website or its editors.