I went to the Rainbow Gathering this year, July 1st through 7th, and concentrated on portraits because these people, in my opinion, are amongst the most important in society.

Portraits | Still-lifes | Weddings
Naturally, if you know my photography (can bee seen at JohnBessa.com), I attempted to appreciate Nature with still-lifes. But I also did my first two weddings--perhaps I am finally on the way to commercial photography!
About the Gathering: It was founded in the mid-70s by soldiers returning from Vietnam and their families to create a therapeutic environment for healing from the traumatic stress they suffered from that exceedingly damaging war.
The family, as all Rainbows are called, meets every year in a national forest, and each to arrive is greeted with a loud "welcome home!"

The biggest gatherings were in the 1980s, numbering 15-20 thousand. Today the gatherings are smaller, but not much smaller, averaging about 10 thousand. The consistently strong numbers of campers at the Rainbow Gatherings have significant implications: hippie culture is alive and well in the United States after all these years, and hippies have been reproducing!
Portraits

Faerie eating breakfast
(Image by John Bessa)   Details   DMCA
Breakfast at the Faerie Kamp
Another group joined "the gathering" early on: the San Francisco "Faeries." The Faeries had their own gathering society that pre-dated the Rainbow Gathers, and they brought experience with them that included urban sophistication and advanced adaptations of hygiene. The Fairy Camp is alive and well this year, and was called the "Faerie Kamp."


Blessings from the Mud Faeries 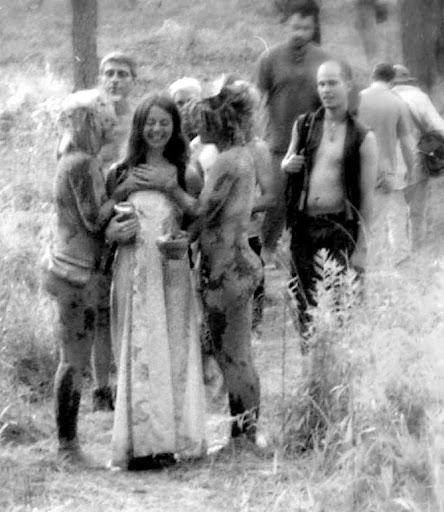 (Image by Unknown Owner)   Details   DMCA
They took you under their arms and granted you a wish by softly humming into your shakras. 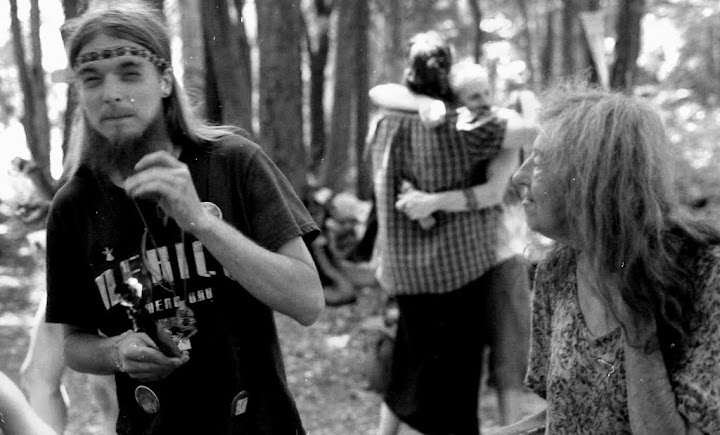 (Image by Unknown Owner)   Details   DMCA
Rainbows young and old -- the Grand Mame here is over 90. I remember her from gatherings twenty-five years ago; she passed as a teenager back then! Two Faeires hug in the background.
Just as in the early days during the protest period of Vietnam, there can be tremendous pressure from the US Forest Service and other enforcers, but this gathering was significant for its harmony with federal authority. There is a "resident" ranger group, affectionately called the Six-Ups, who attempt to bond with the various camps. Another federal group is not so friendly: the LEOs, or Forest Service Law Enforcement Officers. These are well-armed, and go looking for pot smokers, as if marijuana is the enemy. This year they sported paint ball guns, and I could not imagine what they had in mind.

(Image by Unknown Owner)   Details   DMCA
Her hubby and a newly-wed at the Faerie Kamp; the elder couple is from Woodstock, and they were at the Woodstock Concert 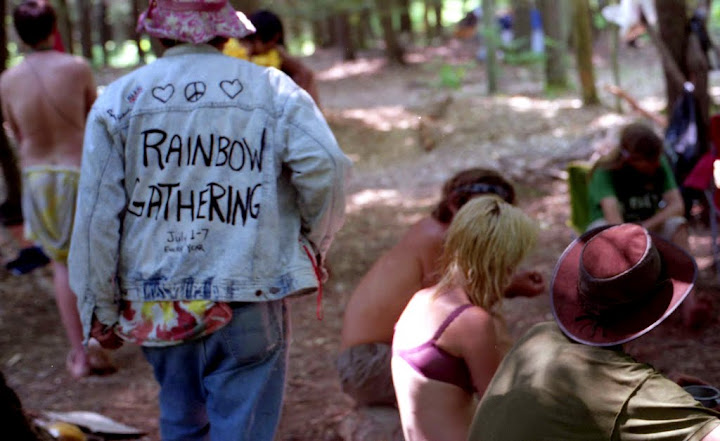 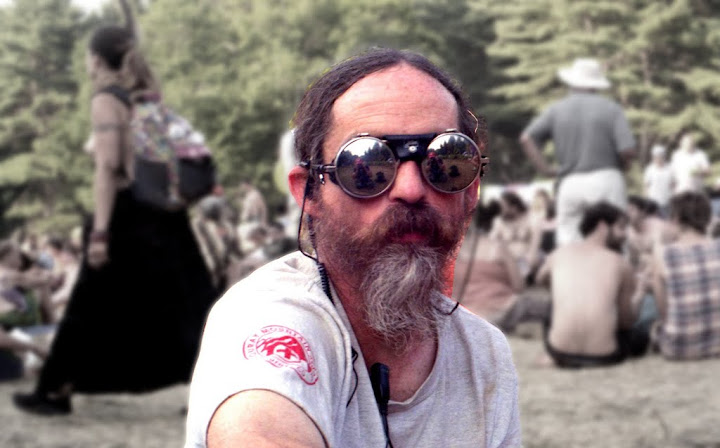 (Image by Unknown Owner)   Details   DMCA
Shanta-sea, or safety. Now sporting sophisticated walkie-talkies, Shanta-sea coordinate with authorities, which is something new, yet they carefully preserve the tribal anarchy that is Rainbow law. 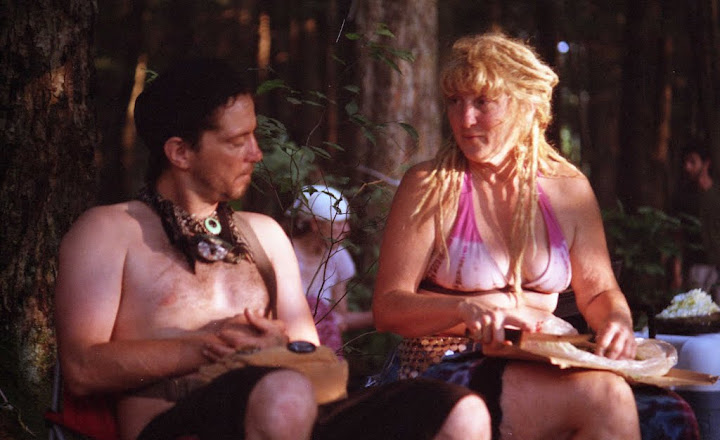 (Image by Unknown Owner)   Details   DMCA
Chopping and chatting at the Woodstock Nation camp at sunset. 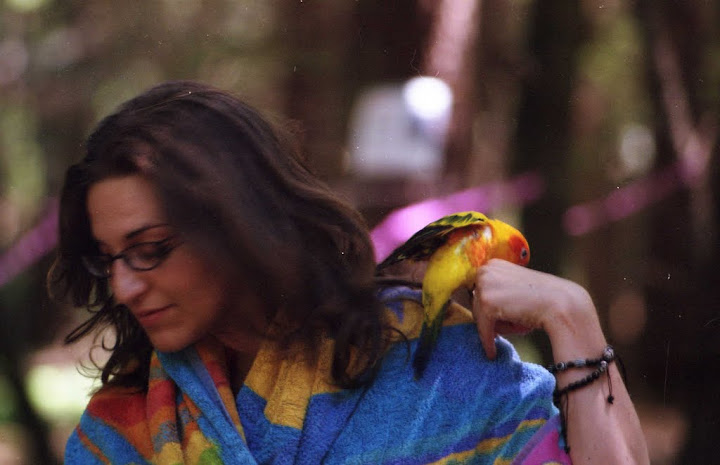 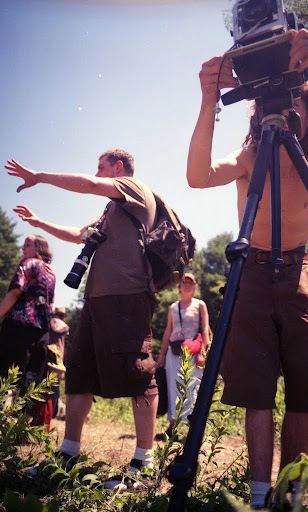 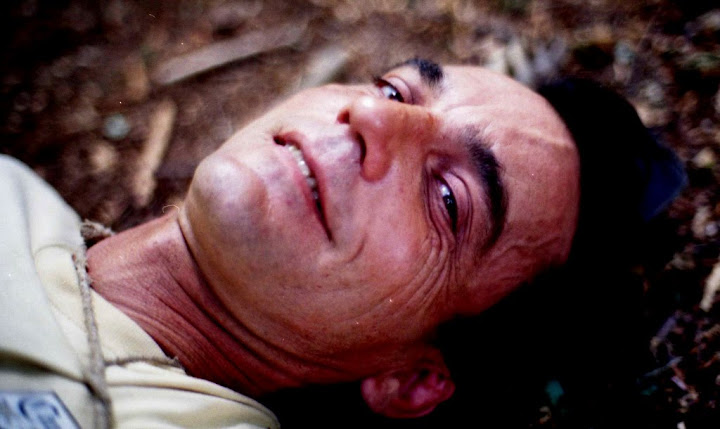 (Image by Unknown Owner)   Details   DMCA
Man laying on ground feeling pretty good about himself! He was not shy at all. 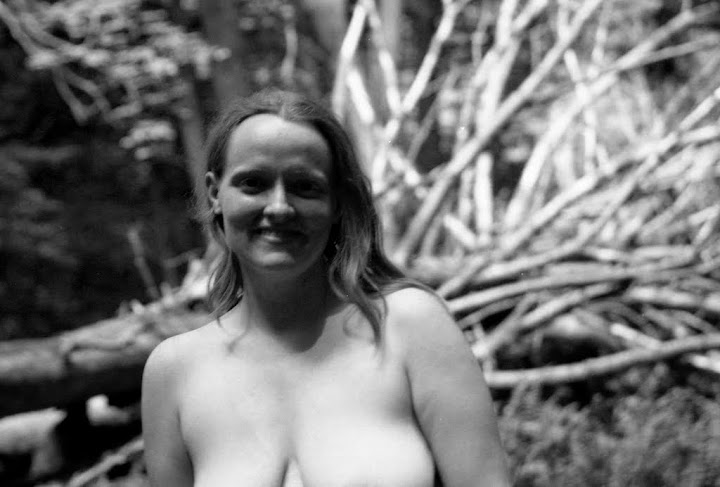 (Image by Unknown Owner)   Details   DMCA
My better half, Eve, after a dip in the cold Queen Stream. 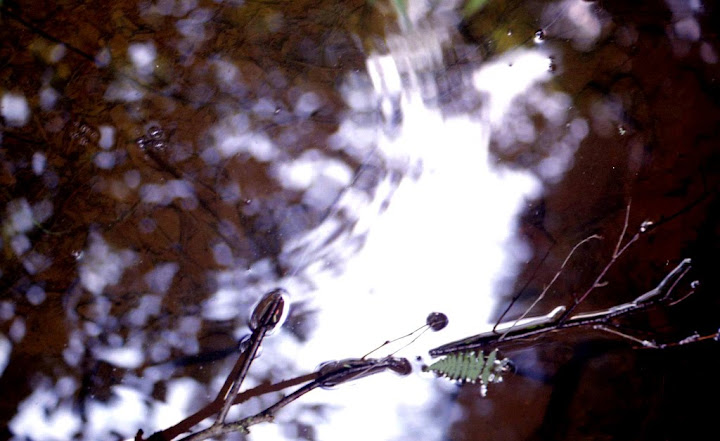 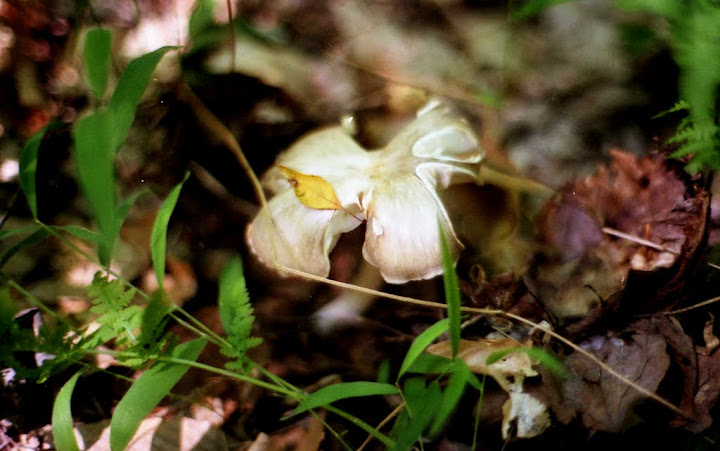 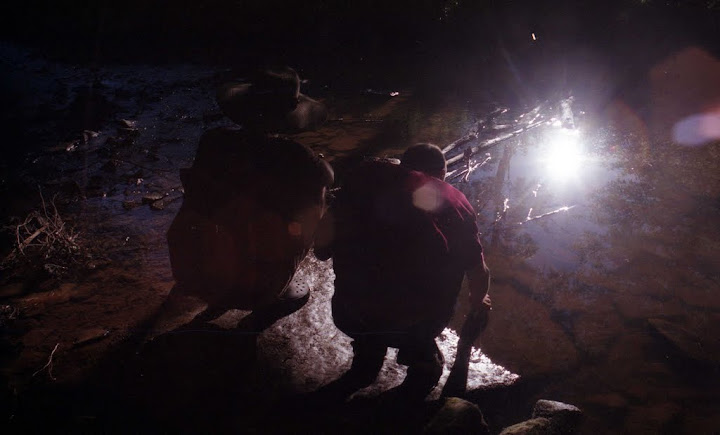 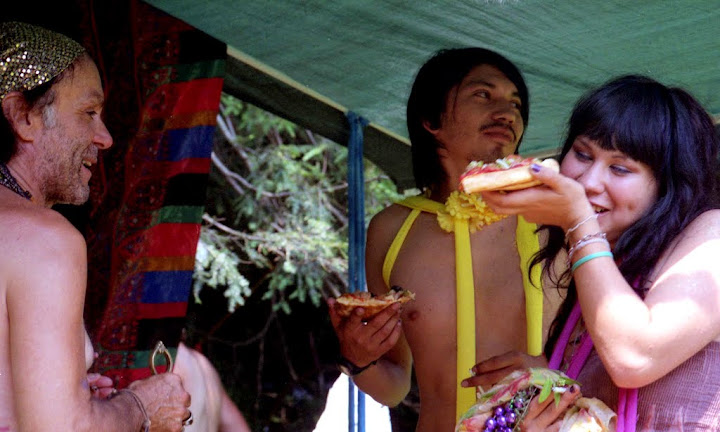 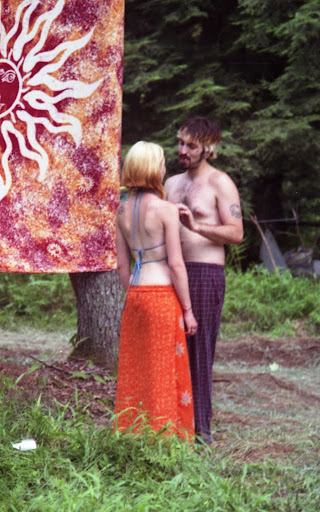 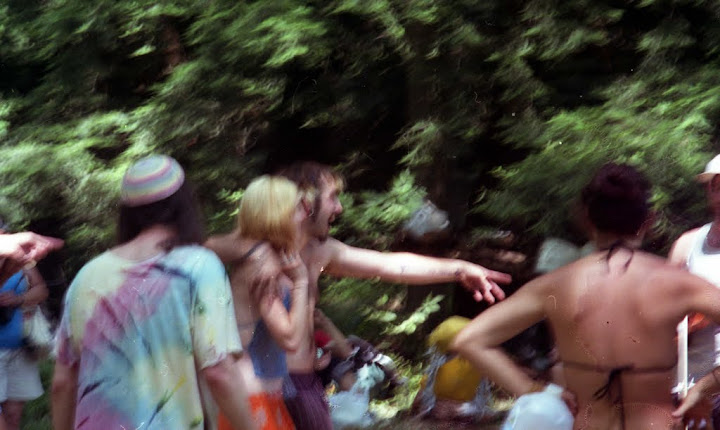 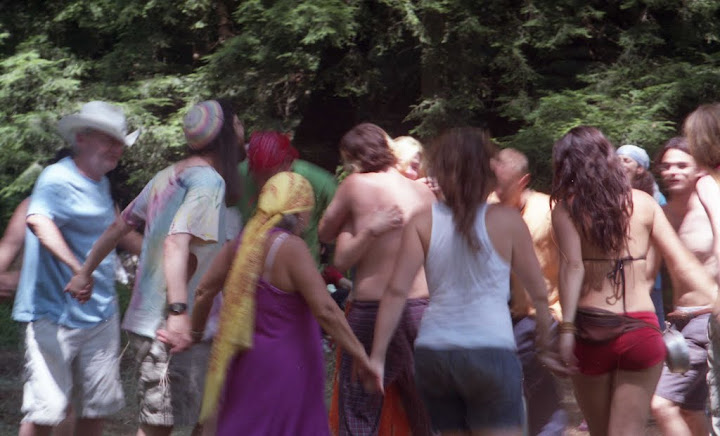 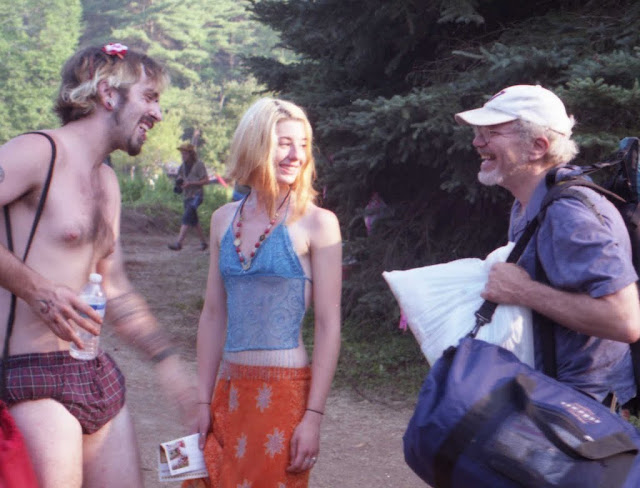 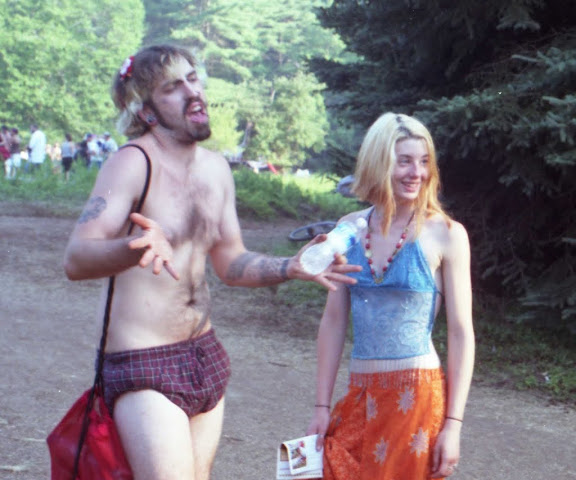 I am a worker, photographer, and writer. I am now working on a counseling masters degree focusing on youth and community, neurology and medication, and underlying genetics. My photography is my greatest accomplishment. The style is the art of (more...)
Related Topic(s): Woodstock, Add Tags
Add to My Group(s)
Go To Commenting
The views expressed herein are the sole responsibility of the author and do not necessarily reflect those of this website or its editors.

Defiance with Daniel Craig: Good movie that opens a BIG can of worms!

American contagion: photos and thoughts on my return from Canada

Americans Kill, so What is the Kindest Way to Kill?

It's OFFICIAL, market crash in the offing--good time to unload?