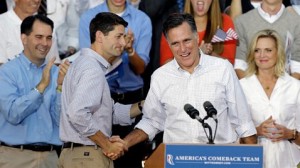 The Doublespeak Twins have confused "bold" for "hazy" in their description of their Medicare "reform" plan.  The Big R rambles nonsensically about "choice" and "options" and "preservation" while the fast-talking little R widens his round blue eyes and spits out a speed-of-sound succession of syllables which, slowed to the perception of the human ear, sound something like "not vouchers, exactly."

The plan from Team RomRyan has been characterized by the corporate media as "bold," gutsy," and even "revolutionary."  Hmmnnnn ... er, what is their reform plan, exactly? Am I missing something, because it seems more "obscure, cloudy, and vague" where I'm sitting.

For a couple of Ayn Rand ideologues, they sure lack her clarity and straightforward objectivism.

Their Obama attack ads claim: "When he ran for president, he said he'd protect Medicare, but did you know that he has taken $716 billion out of the Medicare trust fund? The money you paid for your guaranteed health care is going to a massive new government program that's not for you. The Romney-Ryan plan protects Medicare benefits for today's seniors and strengthens the plan for the next generation," the ad's narrator says.

Okay. Deep breath. This $716 billion claim by the Double-R ranch is bat squeeze.

Robert Reich explains it far better than can I:

"Stumping in Florida today, Mitt Romney charged President Obama's Affordable Care Act will 'cut more than $700 billion' out of Medicare. What Romney didn't say was that his running-mate's budget -- approved by House Republicans and by Romney himself -- would cut Medicare by the same amount.

"The big difference, though, is the Affordable Care Act achieves these savings by reducing Medicare payments to drug companies, hospitals, and other providers rather than cutting payments to Medicare beneficiaries. A July 24, 2012 report from the non-partisan Congressional Budget Office confirms this.

"The Romney-Ryan plan, by contrast, achieves its savings by turning Medicare into a voucher whose value doesn't keep up with expected increases in healthcare costs -- thereby shifting the burden onto Medicare beneficiaries, who will have to pay an average of $6,500 a year more for their Medicare insurance, according an analysis of the Republican plan by the Congressional Budget Office.

"Moreover, the Affordable Care Act uses its Medicare savings to help children and lower-income Americans afford health care, and to help seniors pay for prescription drugs by filling the so-called 'donut hole' in Medicare Part D coverage. The Romney-Ryan plan uses the savings to finance even bigger tax cuts for the very wealthy.

"Spread the word. Don't allow the GOP to get away with this demagoguery."

GOP headliners and surrogates are out in force railing against the president and critics of their plan to end Medicare as we know it. Mittens himself r esponded to the justifiable reaction to his ill-defined Medicare proposals by calling  the President "angry, and desperate to hold onto power."

But if Reich and other critics are wrong, then all RomRyan have to do is put their considerable monies where their mouths are and show us their actual, black-and-white, detailed and defined Medicare "reform" plan. ...
Depending on the time of day, and perhaps position of Mercury in the heavens, Romeny either has a "very different" Medicare plan from Ryan's, or "it's exactly the same." What it isn't, obviously, is written down anywhere for anybody to see. How Cheneyesque.
Talk about your Etch-A-Sketch -- Mittens first tried to distance himself from the radical Ryan budget by claiming HIS Medicare plan was different (uh, then why choose a guy whose claim to Neocon fame was gutting this specific program?  But I digress), then he did a 180 on the CBS morning show and said he and Ryan were "exactly on the same page" on Medicare.
Are you starting to notice a pattern, Truthseekers?  He won't issue his old tax returns because he knows they will reveal his multiple rich-guy evasions and sneaky foreign bank accounts designed to rob the American people of tax monies. He won't put forward a clear, defined Medicare plan that details how HIS proposals will protect the program -- as he claims -- and still cut the deficit. And now he can't even shoot straight on how his ideas differ (if at all) from his chosen running mate. He doesn't rank high on the honesty scale. More like a used-car salesman than trustworthy national leader.
Given Romney's revisionist history and general lack of "truthiness," it's not remarkable that he would radically change his tune in the course of 72 hours, but it does weaken his chosen image as The Man With the Plan to Save America! Especially since he once embraced  -- and implemented -- so many of the very provisions of The Affordable Care Act he now so vehemently despises. What's next?
Can we withstand another 10 weeks of Willard-induced wishy-washy whiplash on the important issues?

Kathy never expected a career in radio as a talk show producer. Born and raised in Atlanta, Georgia, Kathy was completing her nursing degree when in 2001 - in an emergency - she was asked to fill in as the producer of Mike's program. Within a few (more...)
Related Topic(s): Health; Medicare; Republican; Romney-ryan, Add Tags
Add to My Group(s)
Go To Commenting
The views expressed herein are the sole responsibility of the author and do not necessarily reflect those of this website or its editors.