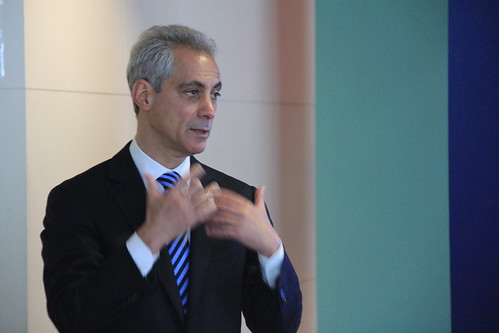 Democratic big wig, Rahm Emanuel outraged supporters of Improved Medicare for All (Single-payer) and immigrant rights with his malicious, anti-immigrant comments made Sept. 9th on the ABC TV show, This Week.

The former Obama chief of staff, Democratic Congressman and Mayor of Chicago, said, "Medicare for All is going to eliminate 150 million people's health care... and provide health care to people who just came over the border."

The truth is, Improved Medicare for All (M4A) will replace expensive unstable employer sponsored insurance with much better coverage that includes all medically necessary treatments and is guaranteed for life.

Every year, millions of people lose their employer sponsored insurance. Employers move, down-size, or go out of business. Employees get laid off or get sick or injured and can't work, losing their coverage just when they need it most. And it's expensive. Or they go on strike and the employer cuts of their health care.

M4A coverage is guaranteed and permanent; it doesn't depend on your job, age, marital status, income or residential status. There are no premiums or out-of-pocket costs. 150 million people aren't losing coverage with M4A, we're gaining much better, much fairer coverage.

Emanuel's comments about "people coming over the border" play to irrational fear of immigrants. They are clearly designed to use that fear to undermine support for a program Emanuel knows is popular. But
helping people in need is a basic American value. On a practical level, covering everyone makes sense: it can help prevent the spread of communicable diseases, and helps avoid costly emergency care. Under M4A, we can afford to cover immigrants and refugees; we can do what's right.

Why is Emanuel making these comments? Rahm is still an important Party fund raiser. Maybe he represent a new current in the thinking of the Democratic Party Leadership. The word is he wants to become a Democratic Party's strategist! If so, God help us. Maybe he wants to run for president as a Democratic version of Trump! At any rate he's now a regular commentator on ABC's This Week with George Stephanopoulos, so he has national exposure.

We're hoping to spread the word about Rahm and the Democrats he represents far and wide among everyone who supports real health care reform and immigrant rights. Let's stop Rahm's vicious ideas from infiltrating more of the Democratic Party or the public discourse. Shame on ABC for giving Emanuel a high position from which to propagate lies and anti-immigrant baiting.

Bill Bianchi is a board member of the Illinois Single Payer Coalition and the Jane Addams Senior Caucus, both HQed in Chicago and dedicated to building the single-payer movement. I also served as the state coordinator for the Progressive (more...)

Related Topic(s): Democratic Lies; Lies Media; Medicare For All; Rahm Emanuel, Add Tags
Add to My Group(s)
Go To Commenting
The views expressed herein are the sole responsibility of the author and do not necessarily reflect those of this website or its editors.

Biden Dismisses Democratic Party Base's Support for Medicare For All

Rahm smears Medicare for All with lies and anti-immigrant dog whistles on national TV.