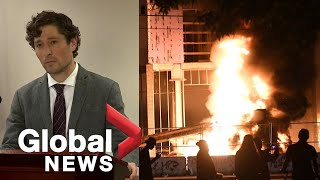 Things seem ready to "boil" over the police killing of George Floyd in Minneapolis last Monday.

As we know Floyd was held to the ground by one officer for some 7 minutes complaining he couldn't breathe while three other officers watched. All four officers have been fired.

Last night protesters in Minneapolis torched the police headquarters in that precinct forcing the police to vacate in their squad cars. Protesters threw rocks and other debris at the cars as they were leaving.

Meanwhile protests have erupted in New York City and Los Angeles over the killing of Floyd.

When people see there is no justice, no accountability, they are capable of erupting with rage and violence against those they see as their oppressors.

Racial profiling of blacks and browns by white police is a daily occurrence in their communities. The police too often stop minorities, frisk, throw them to the ground while some are even murdered by overzealous cops. And those are incidents we know about, where they were filmed. What about the incidents where police brutality hasn't been recorded?

There are times when the killing is so egregious, the rage in some people can't be contained, they erupt with violence and there is hell to pay. That's what we're seeing now.

The fact is racism is alive and well in this country. Just because the racism is not overt, mostly submerged below the surface doesn't mean it's gone. It's there alright then comes to the surface when police overreact, kill a minority, it gets filmed and then goes viral.

The white men and women police are an integral part of the communities where they live. They are not some entity separate from their neighbors. Their communities are mostly not racially integrated. Though "official" segregation is now unlawful in the country, real estate "red lining" practices do prevail keeping the races "unofficially" separated.

Retired. The author of "DECEIT AND EXCESS IN AMERICA, HOW THE MONEYED INTERESTS HAVE STOLEN AMERICA AND HOW WE CAN GET IT BACK", Authorhouse, 2009
Related Topic(s): Police; Police Brutality; Police Culture; Profiling; Protest; Racism; Violence, Add Tags
Add to My Group(s)
Go To Commenting
The views expressed herein are the sole responsibility of the author and do not necessarily reflect those of this website or its editors.