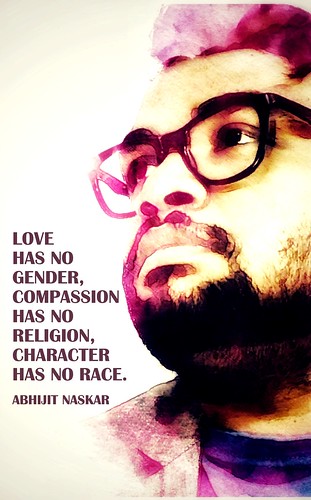 Worldwide radical egalitarianism can save the planet, the world, and our souls. We have to examine the whole world and see how it can work together in harmony like the cells and organs of a healthy living body. Instead of nations competing with nations, there are ways that we can work together with cooperation and love. We each should make the same ecological footprint. It's only fair.

Davis Smith in a TED talk entitled "Is Capitalism Saving or Destroying Us?" argues that it will be up to us. He then describes capitalist corporations that are ethical and socially responsible. He presents a graph showing that the percentage of people living in poverty (under $2 a day) in 1820 was 94 percent, but in 2015, it was under 10 percent! However, according to the website Global Issues, almost half the world--over 3 billion people--live on less than $2.50 a day. Davis Smith says that it was the opening of markets in India and China that pulled people out of poverty, yet he does admit that nothing has been more damaging to the earth than capitalism--when we see people and the earth as commodities to consume and discard in order to maximize profits.

Somebody on Facebook asked me a few days ago, if America is so bad, why does everyone want to come here? My question is, do we have so much because we have taken advantage of others such as the Native Americans and African slaves? Have we stolen land from Mexico, and have we exploited other Latin American countries? Have we purposely done "regime change" in many democratically elected governments around the world in the Middle East, Africa, and Asia to further our own interests and business agenda? Have we been unfair to Cuba? Our nation has done a lot of bad things, and it is still doing bad things around the world. There is nothing great about that. Let's just be honest, tell the truth, and stop taking what is not ours, then we will start being great.

The self-actualization of everyone on the planet can be our goal. What if all individuals with entrepreneurial skills could devote to that? Let us start working together, baring our souls, freely sharing what we believe and know. Let us create honesty and transparency at all levels--from the personal to the national to the global level. Imagine how amazing it would be to live in a world where every nation starts working together instead of fighting and competing against one another.

When did Homo Sapiens take a wrong turn? Will Tuttle, author of The World Peace Diet, says it was when herderism emerged. Possibly that led to a top-down, hierarchical and patriarchal system of control and domination that became increasingly entrenched as the norm--in government, in churches, synagogues, and mosques, in marriages and families, in schools, in everything. Hierarchies of authority have their place, but it is much better if they are built from the bottom-up, not from the top-down. They can be built from the bottom-up democratically rather than from the top-down autocratically.

What prevents humans in their current evolution from creating a better world? We live in a matrix controlled by the one percent; some would call it the Deep State or the Shadow Government. Ex-CIA agent Kevin Shipp points out the difference between the the Deep State and the Shadow Government in this video. We have a government that has lied to us about many things, including its contact with aliens. Here are three videos about aliens: one, two, and three. We almost have a $22 trillion dollar national debt, and deficit spending every year takes us deeper and deeper into debt. Wall Street caused the 2008 economic crisis, and then Wall Street gets bailed out, but not the people. The Federal Reserve private central banking system is corrupt. The United States government and the lifestyles of average Americans have been harming and hurting the world. We are not making the world a better place.

According to this Scientific American article, "It is well known that Americans consume far more natural resources and live much less sustainably than people from any other large country of the world." Moreover, "A child born in the United States will create thirteen times as much ecological damage over the course of his or her lifetime than a child born in Brazil," reports the Sierra Club's Dave Tilford, adding that the average American will drain as many resources as 35 natives of India and consume 53 times more goods and services than someone from China." It has been said that it would take four earths if everyone in the world consumed as much as the average American. This Worldwatch Institute article also describes the state of U.S. consumption today.

William Blum may be the best expert on U.S. interventions in other countries since World War II. His book America's Deadliest Export: Democracy has been praised by Michael Parenti, David Swanson, Noam Chomsky, and Cynthia McKinney. In this 13-minute interview of William Blum by Abby Martin (click here ), Blum mentions that we have attempted to overthrow more than 50 countries and we have attempted to assassinate more than 50 government leaders since World War II. The primarily reason for this is because governments seeking or practicing socialism are considered serious threats to us because they will not allow our multinational corporations to go in and exploit local workers by paying them very low wages. Here is William Blum's website: https://williamblum.org/

Bush and Cheney: How They Ruined America and the World by David Ray Griffin is a book I am now reading. David Ray Griffin is probably the foremost expert on 9/11, a watershed event in world history because the interventionist foreign policy of the U.S. has gone into overdrive since 9/11.

After the Soviet Union collapsed, our leaders did not convert our enormous military expenditures into social programs because they by their actions created a new enemy--the terrorists. David Ray Griffin's books make a very convincing case that 9/11 was a government false flag operation to convince Americans that to continue spending astronomical amounts of money on the military is vital to our survival. The military-industrial complex is more concerned about making profits for themselves even if it endangers the general welfare of society. Large corporations control the government and the mainstream media. Moreover, the United States is an empire, which is not what the world needs or wants.

The United States needs to repent of its collective sins and ask each nation it has ever harmed or exploited for forgiveness. It should then vow to help every nation achieve self-determination in a compassionate way. Here are twenty things the United States can do to help itself in a way that also helps the world:

1. We need to shun all lies, misinformation, and disinformation and create a society that values openness, honesty and transparency at all levels.

2. We need to encourage self-awareness by encouraging a deep study of psychology, conflict resolution skills, interpersonal communication skills, yoga, Buddhism, and mindfulness meditation. Even hallucinogenic herbs such as cannabis, peyote, and ayahuasca can have therapeutic uses for some people when their separative ego is transcended and they experience the spiritual oneness of everything being interconnected. Maybe imperialist heads of states need to smoke some weed; it might help eradicate their sociopathic desire for never ending wars. Here is how one young woman describes her life-changing experience from taking ayahuasca. Of course, people who are very opposed to hallucinogens should not take them. Hallucinogens open us up to the contents of our unconscious; to learn from the experience, it takes humility to handle that.

3. We need to demand that the largest national political parties be allowed to participate in presidential debates. Having candidates from the Libertarian, Socialist, Green, and Constitution parties would broaden the spectrum of viewpoints, but Republicans and Democrats have agreed to not allow that. Though I consider myself more an ecological or democratic socialist than a Marxist-Leninist, I think this article, for example, from a Marxist-Leninist website provides a view about the current migrants marching north from Central America toward the U.S. southern border that you will not hear in the mainstream media. If we had the 7 largest national political parties participating in presidential debates--the Green Party, various socialist parties, and the libertarians would have a much greater impact on our society.

4.We need to value solar and wind, eliminate nuclear power, and especially cultivate hemp, the most versatile plant on earth.

Related Topic(s): Bottom-up; Cooperation; Fair; Harmony; Love; Planet Destruction; Poverty; Spiritual; Transparency; World Issues; (more...) World Peace, Add Tags  (less...)
Add to My Group(s)
Go To Commenting
The views expressed herein are the sole responsibility of the author and do not necessarily reflect those of this website or its editors.