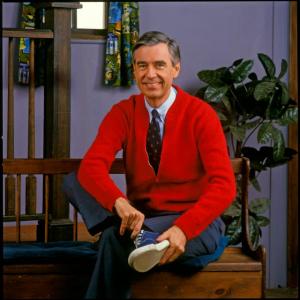 Cloaked in unassuming hand knit cardigan sweaters, Fred Rogers carried out some of the most covert radical activism of the 20th Century.

He saved his first turkey from the ax on "Misterogers," a children's program he created for the Canadian Broadcast Corp. in the 1960s. In one of that show's Thanksgiving episodes, King Friday XIII the imperious puppet who served as Rogers' alter ego on "Misterogers" and on the PBS show "Mister Rogers' Neighborhood" invites a real baby turkey, an adorable little poult, to be a guest rather than the entree at his countercultural holiday table.

In the early 1970s, Rogers stopped eating turkey and meat, fish and other fowl altogether. It was right around the time that Frances Moore Lappe' penned "Diet for a Small Planet," a vigorous argument for vegetarianism. But unlike Lappe', Rogers was an ordained Presbyterian minister who used spiritual language to explain his commitment to a plant-based diet.

"I want to be a vehicle for God, to spread his message of love and peace," Rogers said in a 1983 interview with Vegetarian Times. For Rogers, that could never mean beheading turkeys, breaking their wishbones or biting their legs. At the very least, it meant treating turkeys and all God's creatures as worthy of care and compassion.

"I don't want to eat anything that has a mother," Rogers often said.

Of course, Rogers' love for children also played a role in his choice to adopt a vegetarian diet. In the 1983 interview, he explained that when boys and girls "discover the connection between meat and animals, many children get very concerned about it." With this in mind, he made sure his program didn't include any images of people eating anything other than a vegetarian meal.

The series concludes with Neighborhood residents sitting down to their Thanksgiving dinner with hungry friends from a nearby community. Rogers' message is unmistakable: By sharing our bounty with those who have less, we help make it possible for them to live and love, to partake of the food for the spirit.

The new movie about Rogers, who was an opponent of gluttony in addition to being a vegetarian, will ironically be released at Thanksgiving. "It's a Beautiful Day in the Neighborhood" stars Tom Hanks.

When Hanks was on The Ellen DeGeneres Show, he said, " (Rogers) taught me that listening is a million times more important than talking," said Hanks. "There is an acronym that I've now started using in my own life W-A-I-T, wait which stands for 'why am I talking?' You should just sit and start listening to everybody that comes across your way and you'll be amazed at what you learn."

A BEAUTIFUL DAY IN THE NEIGHBORHOOD - Official Trailer (HD) It only takes one person to inspire a world of kindness. Based on the true story, #ABeautifulDayMovie in theaters this Thanksgiving.
(Image by YouTube, Channel: Sony Pictures Entertainment)   Details   DMCA

Related Topic(s): Fred Rogers; Neighborhood; Radicals; Thanksgiving; Vegetarian, Add Tags
Add to My Group(s)
Go To Commenting
The views expressed herein are the sole responsibility of the author and do not necessarily reflect those of this website or its editors.