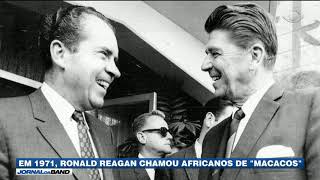 In 1971 Reagan called Africans .apes.. A racist conversation between former US Presidents Ronald Reagan and Richard Nixon was made public after 48 years.
(Image by YouTube, Channel: Band Jornalismo)   Details   DMCA

Is anyone surprised by the revelation that Reagan and Nixon shared a laugh over their own ugly racist jokes? Like we have said, Trump isn't the first racist Republican, only the first to say it out loud.

From The New Yorker:

"On Tuesday, the historian Tim Naftali published the text and audio of a taped call between Ronald Reagan and Richard Nixon from October, 1971.

"Reagan, who was then the governor of California, gave his opinion of the African delegates to the United Nations who voted against the United States' position that Taiwan, rather than the People's Republic of China, should receive U.N. recognition. 'To see those, those monkeys from those African countries -- damn them, they're still uncomfortable wearing shoes!" Reagan exclaimed. Nixon laughed heartily and went on to tell the Secretary of State, William Rogers, about Reagan's outburst, in part to express that many Americans shared such bigotry.

"Hearing the interaction between Reagan and Nixon led Naftali, who is not averse to drawing parallels to the present, to write about 'the dynamic power of racism when it finds enablers.'"

This isn't shocking news, but will it have any impact on the way Reagan is remembered now? Probably not, given how the GOP has gone all-in with the Bigot in Chief. It seems there is no bottom to how far the Republicans will sink in their ability to accept this Archie Bunker con-man president.

A few have started to break ranks, or just give up entirely. Nikki Haley responded to the President's gleeful tweet about Elijah Cummings' home burglary with "this is so unnecessary." Maybe not a profile in courage, but any push back from a Republican is a rare and remarkable event in these times.

A slew of Republicans, three from Texas, have just decided not to run again. They all state various reasons, but looks a lot like Paul Ryan syndrome from the cheap seats. Leave the bigot before he sinks.

As The NY Times states...

"Among the retirements announced in the past week are Representatives Will Hurd of Texas, the only African-American Republican in the House, and Martha Roby of Alabama, one of only 13 Republican congresswomen. Representative Susan Brooks of Indiana, the head of recruitment for the party's campaign committee, had been tasked with replenishing the ravaged ranks of Republican women; she announced in June that she would retire, an indication of the long odds of that effort."

It's not looking good for the Republican Racists in 2020, but hey -- there is always election interference, foreign and domestic! -- it's not who won the votes, but who counts the votes that matters.

Kathy never expected a career in radio as a talk show producer. Born and raised in Atlanta, Georgia, Kathy was completing her nursing degree when in 2001 - in an emergency - she was asked to fill in as the producer of Mike's program. Within a few (more...)
Related Topic(s): Racist Depopulation; Republican Hypocrisy; Republican Racism; Richard Nixon; Ronald Reagan; Trump, Add Tags
Add to My Group(s)
Go To Commenting
The views expressed herein are the sole responsibility of the author and do not necessarily reflect those of this website or its editors.