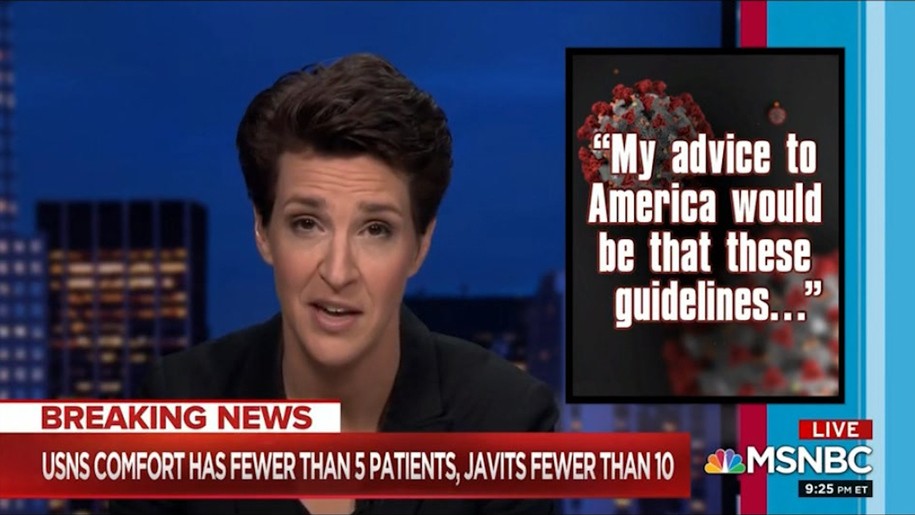 Rachel Maddow exposes that there is a reason for the Trump administration's ineptitude in handling the COVID-19 pandemic, profiteering.

The president is given a platform every day to give Americans the semblance that he is accomplishing something positive to alleviate the COVID-19 pandemic. By now one would think the fourth estate would do its job and ignore his press conferences that should really be called quite lying rallies.

The president has refused to use his Defense Production Act power effectively to centralize production for medical equipment and supplies for hospitals in every state. On the surface, it seemed like ineptitude. But on a deeper dive, it is clear that it isn't.

It turns out that the president's dereliction of duty has allowed supplies already in warehouses in America were being shipped to the highest bidder. Many times these are foreign companies.

Dan Pfeiffer, who was a senior White House adviser for President Barack Obama, tweeted over the weekend, "Trump sending two million masks to China weeks before COVID came to America because he didn't take the threat seriously would be a devastating ad."

U.S. officials openly promoted the China shipment at the time as evidence of the generosity of the American people. And privately, the administration still defends the February shipment as a reasonable decision at the time.

"That was kind of a different era," said one of the Trump administration officials, "when there was not much of an appreciation of this hitting the United States."

But now, given the global shortage of critical medical supplies and U.S. health care workers' daily pleas for more equipment, "the optics would look really terrible" if the U.S. government were to continue the overseas shipments, this official added.

The government has yet to curtail exports by U.S. companies, however-roughly 280 million masks in warehouses around the U.S. were purchased by foreign buyers on Monday alone, according to Forbes. A FEMA spokesperson said the agency "has not actively encouraged or discouraged U.S. companies from exporting overseas," noting that various U.S. agencies are coordinating their activities with their overseas counterparts.

One does not have to be a genius to understand what the Trump administration is doing for its benefactors, the corporate sector. It is using the COVID-19 pandemic to maximize their profits. Sad.