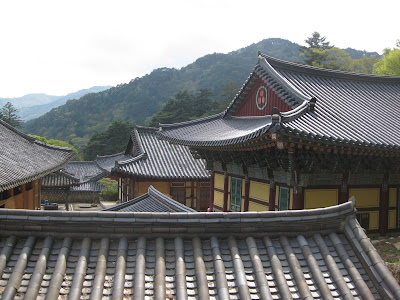 (Image by Unknown Owner)   Details   DMCA
This trip report covers the period of April 13-20 as I traveled to Seoul, South Korea to attend the Global Network’s (GN) 17th annual space organizing conference. Traveling with me was Mary Beth Sullivan and Tom Sturtevant, a leader from Maine Veterans for Peace.

Our first day was a field trip by bus to visit the DMZ along the border between North and South Korea. Our timing for the conference could not have been better as we arrived on the heels of the intense controversy surrounding North Korea’s launch of a rocket into space. The U.S. and Japan used the launch to justify their own deployments of “missile defense” systems in the region, which are ultimately aimed both at China and North Korea. The militarist rhetoric was flying as evidenced by one right-wing commentator from the U.S. who said, “The lesson of North Korea’s rogue launch is that America needs more missile defense not less. Militarily and technologically, our adversaries can catch up with us only if we chose to stand still.”

Our trip to the DMZ was led by well-known photographer Si-Woo Lee who spent two months in a South Korean jail accused of “taking pictures” of the DMZ. He fasted for two months in protest of his arrest. His case generated a great deal of national and international support, and he was ultimately acquitted. At the DMZ, we had a group photo taken with North Korea just behind us, and at one point I watched a bird fly back and forth between the two countries. It reminded me that humans build walls between each other while nature knows nothing about boundaries and lines of separation. The next day the group color photo was published at the top of page one in a leading national newspaper.

One of out of four families in South Korea has relatives in the North. Thus the drive for peaceful reunification of the country is deep in the hearts of the people. Unfortunately, the U.S. is expanding its military presence in South Korea and trying to drive the two nations further apart, while 60% of South Koreans want American bases closed and the troops to leave the country.

Our April 17 space organizing conference, attended by about 100 people, was without a doubt the most professionally organized event we’ve had during the GN’s 17 years of operation. The meeting facilities at the Seoul Women’s Plaza were first rate, we had simultaneous translation from Korean into English, and the food and sleeping accommodations at this same location were excellent.

Wooksik Cheong from the Korean Peace Network, a key conference organizer, in his speech called U.S. missile defense deployments [Aegis destroyers, PAC-3, and THAAD] in South Korea and Japan the “iron curtain of the 21st century.”

Global Network board member Atsushi Fujioka from Japan, a professor of Economics in Kyoto, told the assembled “Not to trust missile defense. It is like trusting a key of the henhouse to a wolf.” Atsushi, who helped bring 20 fellow Japanese to the conference reported that, “In Japan the U.S. Navy and Marine bases are shifting to Okinawa, the closest point to China. I think the major target of missile defense will not be North Korea, but China and Russia.”

Similarly, Koji Sugihara, representing the Japanese peace group called No to Nukes & Missile Defense Campaign, recently wrote “Under Article 9 of the Constitution, which renounces war and prohibits the maintenance of armed forces, Japan is not supposed to have a war industry….Japan’s cooperation with the U.S. in missile defense development is unusually intense. In fact, Japan’s islands have been turned into a huge missile defense-testing site. North Korea’s missile tests in July 2006, and its nuclear test in October 2006, served as a pretext for the acceleration of the U.S.-Japan missile defense plan.”

Physical evidence of this Asian-Pacific acceleration of U.S. missile defense deployments were witnessed by conference participants when we took a second field trip on April 18 to Pyeongtaek where the U.S. military is dramatically expanding an existing base. There we saw multiple launch vehicles for the PAC-3 – the latest version of the Patriot missile system that is now being deployed in South Korea and throughout Japan.

We were given a tour of the surrounding area, much of it farm land, that is being gobbled up by the U.S. base that will grow from 8,999 to more than 23,000 American soldiers. The U.S. is moving troops away from the DMZ onto this giant Air Force and Army “hub” base where they will be out-of-range of North Korean weapons fire. Farmers and local activists from the Pyeongtaek Peace Center have been vigorously protesting against this expansion for several years but the U.S. will not be denied.

Earlier in the day on April 18 we held the annual membership business meeting of the Global Network where we had a stimulating strategy discussion and approved new board members from South Korea, Japan, Poland, U.S., and the Czech Republic. It was also agreed to pursue the proposal by board member J. Narayana Rao to hold our 2010 GN space conference in Nagpur, India. The U.S. is now dragging India into the space weapons race in an already unstable part of the world.

Our annual Peace in Space Award, for extraordinary work on the issue, was presented during the conference to Sung-Hee Choi (South Korea), Atsushi Fujioka (Japan), and J. Narayana Rao (India). Sung-Hee had been the primary force behind our decision to meet in South Korea this year and showed her dedication to the organization by being a tireless organizer before and all during the event.

Our third and final field trip was on April 19 as we headed north to Mugeon-ri where the U.S. is expanding another military area – this time for tank and Bradley fighting vehicle training. Since 1980 local rice farmers have been organizing to resist the taking of their beautiful lands for warfare preparation. Mugeon-ri is just a short distance from the North Korean border. The U.S. has already taken a huge area and now wants 30 square kilometers of additional land that will displace hundreds more farmers.

In 2002 two 15-year-old local schoolgirls, walking to a friend’s birthday party, were run over and killed on a narrow street in the town by U.S. tanks. To this day no one has been held responsible for their killing.

Because Mugeon-ri is near to the North Korean border, and has similar terrain, the military training that goes on there is viewed by the Korean peace movement as a preparation for an attack by the U.S. So not only do the farmers face losing their lands but they also face the sad reality that their lands are being used to train to kill their relatives in nearby North Korea.