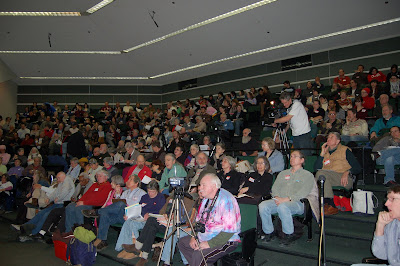 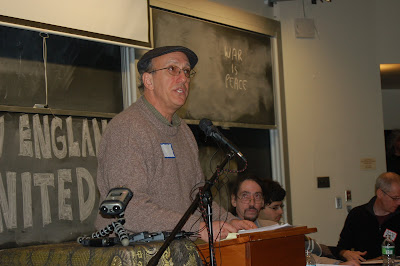 (Image by Unknown Owner)   Details   DMCA
I had the great honor to be invited to speak this past Saturday at a wonderful "New England United Antiwar Conference" held at MIT in Cambridge, Massachusetts. There was a stellar cast of speakers at the event which drew well over 300 highly motivated folks from throughout the Northeast region. Students from New Hampshire and Connecticut were particularly abundant as well as black activists who called Obama a fraud. Independent candidates for Congress and large delegations of Latin American activists were also present.
I spoke on a plenary panel called "The Drive Towards Empire and Endless War" and had the pleasure to share that panel with one of my favorite journalists - Glen Ford from the Black Agenda Report. In speaking about the U.S. drive for expanded war Ford said, "They must intensify their military operations because they have no other options."
One particularly moving speaker was Pardiss Kebriaei who is an attorney from the Center for Constitutional Rights that represents many of the 200 still being held at the U.S. prison facility at Guantanamo. One client she told us about is from Syria and is in his ninth year of detention. Kebriaei said she "had nothing good to say about Obama" who continues the Bush administration policies of detention, torture, and assassinations.
Kebriaei reminded us about the U.S. "detention" facility at Bagram, Afghanistan that holds 600-700 prisoners. The lawyers, she said, don't know who the prisoners are, where they are from, what they have been charged with, and Obama takes the Bush line that these people "have no rights."
She told us that just "closing" Guantanamo, and moving them to another maximum security prison in some other state, will not end this immoral and illegal policy. If these prisoners went to court any charges would not hold up because their "confessions" came from torture. Thus the decision to keep them locked up in suspended animation.
Peter Dale Scott (former Canadian diplomat and Professor of English at the University of California, Berkeley) spoke via Internet hook-up from California and talked about "deep events" in U.S. history that clearly reveal that the corporate oligarchy that runs our country today has a long track record (Modus Operandi) of fabricating justifications for entering into war. Whether it was the Vietnam War Gulf of Tonkin Resolution or 9-11 today, the U.S. controls the minds of the people by creating fear and using it to enable endless war. He talked about COG (Continuity of Government) which is planning for suspension of the constitution at some point when they feel that the public has begun to revolt against our corrupt government.
In a workshop called "Redirecting Military Spending to Meet Human Needs" one man introduced himself as a "53 year-old who works as a loan officer for a large national bank." He said his job is to approve small business loans. He told us that the banks are not loaning to these small businesses and that they are going under in droves. He expressed his "total frustration" and said we have to keep making the connection between economic collapse here at home and massive spending on endless war.
Another person spoke about their effort to bring anti-war spending resolutions to their city government. One activist reported that the Mayor of Boston has endorsed a call for a 25% cut in current military spending.
After having seen the big turnout at a peace movement meeting in New York City a couple nights before, and then this great conference at MIT, it is clear to me that the energy is coming back into the peace movement. Most folks are moving beyond Obama's false "hope and change" rhetoric and recognizing that we've got to move quickly to step up the pace of our organizing.
The best part of the conference though was seeing once again the integration of the issues into a larger critique of U.S. military policy - economic collapse at home - climate change - corporate dominated media - and solidarity with people's movements in Palestine, Latin America, Asian-Pacific and other parts of the world.
We can't have a singular focus (a myopic focus) for our message. We need to create a big picture and big tent movement and this conference was one of the best attempts at doing this that I've ever seen.

Related Topic(s): Activist; Climate; Conference; Economic; Energy; Hope Hopefulness; Military; Organizing; Peace; Prisoners; (more...) Torture; War, Add Tags  (less...)
Add to My Group(s)
Go To Commenting
The views expressed herein are the sole responsibility of the author and do not necessarily reflect those of this website or its editors.