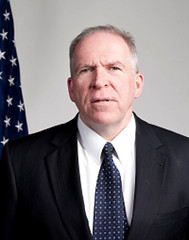 Former CIA Director John Brennan is apparently so worried that Donald Trump might release certain classified intelligence that he suggested this week that Vice President Mike Pence and the cabinet remove Trump via the 25th amendment.

Brennan appeared this week on both CNN and MSNBC to spread alarm about what Trump might do as he continues to contest the election results and appoints new people at Defense, NSA (and possibly CIA) who may do his bidding.

Brennan warned on CNN that it was "very, very worrisome" that Trump "is just very unpredictable now ... like a cornered cat tiger. And he's going to lash out."

Brennan told MSNBC he was worried that Trump has called for the "wholesale declassification of intelligence in order to further his own political interests."

Whom would he lash out at and what classified documents might Brennan be referring to?

The CIA's point man at The Washington Post, David Ignatius, has provided the answer:

"President Trump's senior military and intelligence officials have been warning him strongly against declassifying information about Russia that his advisers say would compromise sensitive collection methods and anger key allies.

"An intense battle over this issue has raged within the administration in the days before and after the Nov. 3 presidential election. Trump and his allies want the information public because they believe it would rebut claims that Russian President Vladimir Putin supported Trump in 2016. That may sound like ancient history, but for Trump it remains ground zero the moment when his political problems began."

Protecting "sources and methods" is a red herring. They can be redacted from a classified document. It's the content of these files that has Brennan extremely nervous as they might reveal Brennan's role in the Russiagate scandal. Of course, Brennan invoked the old trope of "national security" when it appears it's his own security he's worried about.

As we noted at a similar juncture in March 2018 (in "Former CIA Chief Brennan Running Scared"), Brennan's foremost worry then, as now, was that Trump was about to expose him to the disgrace that befell ex-FBI Deputy Director Andrew McCabe for malfeasance in connection with Russiagate.

The president had just fired McCabe for repeatedly lying, and Brennan had good reason to worry. That was before the true extent of the roles McCabe, his boss, former FBI Director James Comey, and Brennan played in the WMD-style fabrication of "Russiagate" had became more fully understood.

Ray McGovern works with Tell the Word, the publishing arm of the ecumenical Church of the Saviour in inner-city Washington. He was an Army infantry/intelligence officer and then a CIA analyst for 27 years, and is now on the Steering Group of Veteran Intelligence Professionals for Sanity (VIPS). His (more...)
Related Topic(s): Intelligence; John Brennan; Msnbc; Pentagon; Ray McGovern; Russia, Add Tags
Add to My Group(s)
Go To Commenting
The views expressed herein are the sole responsibility of the author and do not necessarily reflect those of this website or its editors.