Click Here to Remove All Ads
Chaos will necessarily follow: social and political turmoil, military adventures, racism and xenophobia... All the evils the world has already experienced after Black Thursday in 1929. The Deep Depression is not a fatality. Act before September 9th.

The Invisible Hand of Irrational Exuberance.

PRLog (Press Release)Jun 28, 2010 No one disagrees now: the global economy is in a fragile condition. We will soon discover that governments, central banks and supra national bodies will be powerless when faced with another slow down of economic activity or an outright market collapse.

We already have clear signs of economic slow down: increase in new jobless claims, decrease in consumption, durable goods orders and an eye popper stumble of new home sales.

That also has reached its limit with short-term interest rates close to zero in every developed economy. Central banks will find it difficult to decrease it lower than what they call the zero lower limity. The so called 'quantitative easing', which have pumped trillions of liquidity that can't find their way into real investment. If they were we would witness some sort of inflation which we don't. It raises the question: What several trillion dollars more will do that 2 trillion dollars didn't do. Will people accept another round of these obviously unjust measures? The last non conventional monetary policy tool, devaluation of the currency, has also already been exhausted.

What can yhey do the Japanese couldn't during the last decade, which is now 17 years old, when faced with a milder local collapse of the economy?

How could we know how effective is the monetary policy? The Federal Reserve System decided on March 23, 2006, 9 month before Goldman Sachs decided to pull back from Mortgage Bond Securities market, to terminate the publication of the single most important measure of the effectiveness of its actions: the M3 measure of money supply or the quantity of liquidity it injects that gets transformed into long-term investments.

Long-term yields go down as they have since 1981. At some point they will be so low as not to reward the investor for interest-rate risk. Sooner or later he will prefer cash at 0% interest rate rather than any lon-term investment: it is the crash.

Long-term trend of the Yields of US Treasury Bonds: 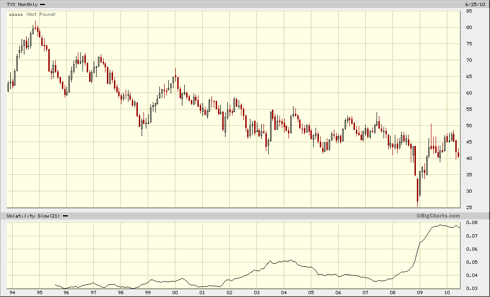 Short-term trend of the Yields of US Treasury Bonds: 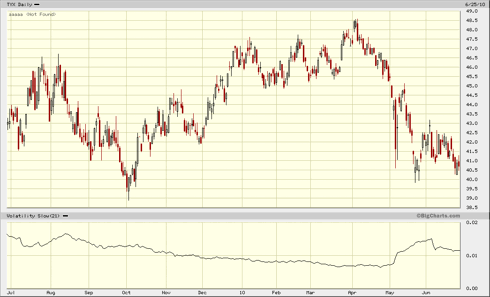 I have an engineer diploma from Ecole Centrale de Lyon (France) and a MBA from Boston University. Since 1986 till 1994 I have worked as a broker dealer on the French Domestic Fixed interest market. Since the spring of 1994 I have worked on the (more...)
Related Topic(s): Banks; Depression; Economy; Hate-Racism-Bigotry; Inflation; Keynesian; Market_Fundamentalism; Markets; Markets-Political Prediction; Military; (more...) Policy; Xenophobia, Add Tags  (less...)
Add to My Group(s)
Go To Commenting
The views expressed herein are the sole responsibility of the author and do not necessarily reflect those of this website or its editors.

Giving Tempo to the TWIST.

The Legends of Quantitative Easing