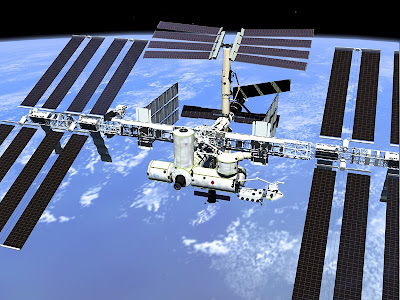 (Image by Unknown Owner)   Details   DMCA
The media is abuzz with the human interest story about Rep. Gabrielle Giffords (D-AZ) who will be flying to Cape Canaveral for Friday's scheduled launch of the space shuttle Endeavour which will carry her husband, Mark Kelly, to the International Space Station (ISS).

Rep. Giffords has recovered well enough from the recent tragic shooting of her and others in Arizona to make the trip. This launch will be the second-to-last mission of the space shuttle program before it is shut down in favor of Obama's plan to privatize key portions of the space launch business.

Like so many other things in our society today, the plan to privatize space launches comes after years of taxpayer investment created the basic space technological infrastructure that will now, to a considerable extent, be turned over wealthy investors. Immediate plans call for private industry to boost "space tourism trips" where people, with too much money on their hands, take a joy ride up into the heavens. From there we'll see private space developers begin to contract with the government for launch services. Eventually private corporations will fly missions to, and make land claims on, the moon, asteroids, and other planetary bodies for the purpose of extracting precious resources from those places.

In the meantime massive government investment will continue to create space military technologies to "control and dominate space" so that when the day comes where profit can be made from mining the sky, the Space Command will be able to patrol a military highway, or create a "front gate," to determine which countries or corporations have the ability to travel to and from Earth to space.

This strategy was all clearly spelled out in the 1989 Congressional study called Military Space Forces: The Next 50 Years. Author, and congressional staffer John Collins, wrote:

Military space forces at the bottom of Earth's so-called gravity well are poorly positioned to accomplish offensive/defensive/deterrent missions, because great energy is needed to overcome gravity during launch. Forces at the top, on a space counterpart of "high ground," could initiate action and detect, identify, track, intercept, or otherwise respond more rapidly to attacks. [This would include bases on the moon, armed space stations, and other orbiting battle platforms.] Put simply, it takes less energy to drop objects down a well than to cast them out.... Armed forces might lie in wait at that location to hijack rival shipments on return.

This is all a very expensive proposition. Some years ago the industry publication, Space News, wrote an editorial admitting they had to come up with a "secure funding source" in order to pay for their industry's plans in space if the U.S. hoped to stay on top of the heap. In the editorial they notified readers that indeed they had identified such a funding source - the "entitlement programs" and were sending their lobbyists to Washington to secure them for their use.

Officially the entitlement programs are: Social Security, Medicare, Medicaid, and what is left of the welfare program. It is these programs that today are under vicious attack by the corporate interests who wish to use those funds in part to build their pyramids to the heavens.

The spectacle of a recovering Rep. Giffords and Obama waving to her husband as he blasts off on the space shuttle will bring tears to many eyes and warm feelings in many hearts. The aerospace industry hopes that more support for "everything" space will also result.

Related Topic(s): Corporate; Energy; Funding; Medicare; Military; Mining; Strategy, Add Tags
Add to My Group(s)
Go To Commenting
The views expressed herein are the sole responsibility of the author and do not necessarily reflect those of this website or its editors.