From Nation Of Change

High crimes and misdemeanors of the fading American century. 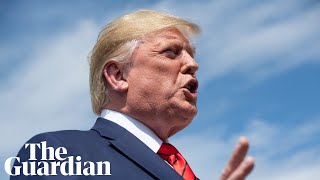 Donald Trump says there should be a way of stopping impeachment inquiry
(Image by YouTube, Channel: Guardian News)   Details   DMCA

There is blood in the water and frenzied sharks are closing in for the kill. Or so they think.

From the time of Donald Trump's election, American elites have hungered for this moment. At long last, they have the 45th president of the United States cornered. In typically ham-handed fashion, Trump has given his adversaries the very means to destroy him politically. They will not waste the opportunity. Impeachment now finally, some will say qualifies as a virtual certainty.

No doubt many surprises lie ahead. Yet the Democrats controlling the House of Representatives have passed the point of no return. The time for prudential judgments the Republican-controlled Senate will never convict, so why bother? is gone for good. To back down now would expose the president's pursuers as spineless cowards. The New York Times, the Washington Post, CNN, and MSNBC would not soon forgive such craven behavior.

So, as President Woodrow Wilson, speaking in 1919 put it, "The stage is set, the destiny disclosed. It has come about by no plan of our conceiving, but by the hand of God." Of course, the issue back then was a notably weighty one: whether to ratify the Versailles Treaty. That it now concerns a "Mafia-like shakedown" orchestrated by one of Wilson's successors tells us something about the trajectory of American politics over the course of the last century and it has not been a story of ascent.

The effort to boot the president from office is certain to yield a memorable spectacle. The rancor and contempt that have clogged American politics like a backed-up sewer since the day of Donald Trump's election will now find release. Watergate will pale by comparison. The uproar triggered by Bill Clinton's "sexual relations" will be nothing by comparison. A de facto collaboration between Trump, those who despise him, and those who despise his critics all but guarantees that this story will dominate the news, undoubtedly for months to come.

Andrew J. Bacevich is professor of history and international relations at Boston University. His new book is The Limits of Power: The End of American Exceptionalism.
Related Topic(s): Donald Trump Criminal; Inequality; Trump Against Democracy; Trump Campaign; Trump Ego; Trump Impeachment; Trump Protesters; Trump Untrustworthy, Add Tags
Add to My Group(s)
Go To Commenting
The views expressed herein are the sole responsibility of the author and do not necessarily reflect those of this website or its editors.

The real story of Obama's Wars

Answering the Armies of the Cheated

Beyond Donald Trump -- When Poisons Curdle