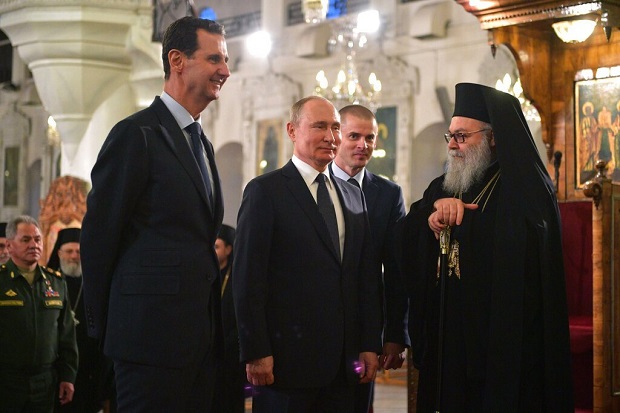 The unannounced visit to Syria, where Putin also delivered a Christmas address to Russian forces deployed in that nation, was remarkable. Any visit by a national leader to a foreign war zone is, in and of itself, notable, and let there be no doubt - Syria is an active war zone. But Syria is no run of the mill conflict zone. It is at the center of a complex web of violence involving a myriad of state and non-state actors, including two adversarial nuclear powers - the US and Russia.

The conflict also involves separatist Kurds, Syrian rebels, foreign Islamist terrorists, Hezbollah, the Turkish Army, Israeli and Iranian forces, and the Syrian Army. And while the Syrian conflict has entered what most observers believe is the end game, with the Syrian Army, backed up by the Russian Air Force, engaged in a final offensive against the last militant bastion in Idlib Province, the potential for Syria to explode in violence involving some or all of the forces listed above is a real and present danger.

While Putin was on the ground in Syria, Iran's Islamic Revolutionary Guard Corps (IRGC) fired at least a dozen medium-range ballistic missiles at US bases on Iraqi soil. These attacks were in retaliation for the US assassination of Qassem Soleimani, a senior IRGC general who was much beloved and respected inside and outside of Iran.

The Iranian government has stated that if the US does not respond to this retaliation, then General Soleimani's death will have been revenged, and the crisis terminated. If, however, the US were to attack Iran, then Tehran has threatened to attack additional targets in the region, including Israel and the UAE. If this were to transpire, then the situation in the Middle East would devolve into general war that would undoubtedly spread to Israel.

Putin has a record of visiting Russian troops who are deployed in harm's way. Shortly after taking over the presidency from Boris Yeltsin, Putin made a scheduled trip to Chechnya, where he met with soldiers in Grozny. He has made several similar visits to troops in the troubled Caucasus region since then. In 2017, the president visited Russian troops stationed at the Khmeimim Airbase in Latakia, Syria. Seen in this light, the current trip can not be said to be a particularly unique event. However, the timing of the visit, coinciding as it does with the escalation of violence between the US and Iran in neighboring Iraq, is auspicious.

Putin met with Assad in a joint military operations center, where they received a briefing on the current situation in Syria. The two leaders then went on a tour of the Syrian capital of Damascus, visiting cultural and religious sites. The imagery of these moments, memorializing as they did the close relationship between two wartime allies, contrasted sharply with what was transpiring in Iraq. There, President Donald Trump had deliberately acted in a manner which violated Iraqi sovereignty while breaking international law, assassinating an Iranian official, Soleimani, who had arrived in Iraq at the invitation of the country's prime minister, Adil Abdul Mahdi, an erstwhile ally of the US. Following this attack, Mahdi made a presentation to the Iraqi parliament, supporting the passage of a resolution ordering all foreign troops out of Iraq. And now Iranian ballistic missiles have rained down on US bases on Iraqi soil.

In the days, weeks and months to come, regional and world leaders will be engaged in concerted diplomacy to contain the US-Iran crisis and prevent a larger conflict that could have extremely detrimental consequences for regional and world peace and security. In the past, the US has stepped forward to assume a leadership role in helping to craft a diplomatic or military solution. But leadership is a two-way street - respect is earned, not assumed. As things currently stand, the US under President Trump has seen its moral authority to lead eroded to such an extent that American diplomacy is little more than an empty vessel.

While the US maintains a sizable and capable military force, which the Iraqi parliament has voted to evict from its soil, force alone cannot compel compliance with Washington's objectives. In many ways, the chaos unfolding in the Middle East is reflective of the overall unraveling of US credibility brought about by the dysfunctional policies of President Trump.

While there is no way to predict with any degree of certainty how events will ultimately transpire in the Middle East, this much is sure: nations will be looking for someone to fill the vacuum created by the collapse of US authority and influence in Iraq. It is in this context that the visit to Syria by President Putin must be evaluated. It is said that a picture speaks a thousand words. The image of Putin shaking hands with Assad, in contrast with the pictures of Iranian missiles fired at US bases in Iraq, provides a point of comparison that will resonate in the minds of anyone looking for stability over chaos, and peace over war. From this perspective, it speaks volumes.

Related Topic(s): Bashar Al-assad; Christmas; International; Leader; Orthodox Christianity; Putin; Syria; Vladimir Putin, Add Tags
Add to My Group(s)
Go To Commenting
The views expressed herein are the sole responsibility of the author and do not necessarily reflect those of this website or its editors.