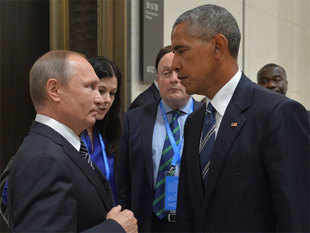 Not for the first time, the contrast in character between Putin and Obama was illustrated in the latest diplomatic spat over alleged Russian hacking. The temptation to hit back in kind to Washington's sanctions must have been great for Moscow. But in the end, the Russian leader probably showed that the best response was to simply ignore Obama's clumsy stupidity.

With typical histrionics and contrived fanfare, the White House announced that it was expelling 35 Russian diplomats, whom it accused of being "spies" and of alleged hacking during the US presidential election in November. Initially, Moscow appeared ready to reciprocate with an equivalent banning of American officials.

However, President Putin then made a surprise attack. He said that his government would not take retaliatory measures. Indeed, he went further by offering seasonal goodwill greetings to President Obama, his family and the people of America, as well as repeating invitations to the children of accredited US diplomats in Russia to festivities being held at the Kremlin.

It was a brilliant move on Putin's part, which even arch-Putin-haters like US Senator John McCain were obliged to admit as being "smart."

For one thing, Putin's gracious magnanimity in the face of American provocations shows the Russian leader to be a fine statesman and human being; whereas Obama looks like a pathetic, cheap nonentity. The outgoing US president is ending his career on a low, grubby note, dangling between the sewer and the gutter.

In the season of goodwill, the Russian leader is the one who rises to the occasion with dignity. Obama, on the other hand, is seen to be a tawdry tinpot.

But there's another reason why Putin's response was right. The unscrupulous Americans are trying their best to antagonize Russia with slander and deeply personal attacks on Putin's character. It is a sordid display that is best left to fume in its own festering pile of lies.

If Moscow were to "stoop to that level," as Putin put it, then that only tends to give the Americans a false and undeserved image of credibility.

That's not to say that one must always turn the other cheek, so to speak. Sometimes self-defense and even retaliation are justified and necessary.

Nevertheless, there are times when an aggressor is best dealt with by letting him rant and rave, spit and foam at the mouth. It then becomes apparent that the antagonist has no credibility nor decorum.

The latest US-led media campaign to demonize Russia concerning the alleged hacking of the presidential election is transparently mendacious. The American political establishment including the dominant news media are shooting themselves in the foot by piling up what is a fake narrative impugning Russia.

Sooner or later this narrative is going to implode and be exposed as a baseless propaganda stunt. We can be certain of this outcome because there is no evidence whatsoever to support the grandiose claims of Russian cyber attacks.

Obama has staked the supposed authority of the White House to accuse Putin of personally overseeing Russian cyber operations.

Related Topic(s): Obama Effect; Propaganda; Putin; Sanctions, Add Tags
Add to My Group(s)
Go To Commenting
The views expressed herein are the sole responsibility of the author and do not necessarily reflect those of this website or its editors.