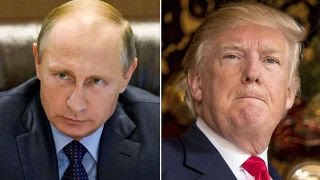 The backdrops to the Putin/Trump meeting are the aspirations of Israel and the neoconservatives. It is these aspirations that drive US foreign policy.

What is Syria about? Why is Washington so focused on overthrowing the elected president of Syria? What explains the sudden 21st century appearance of "the Muslim threat"? How is Washington's preoccupation with "the Muslim threat" consistent with Washington's wars against Saddam Hussein, Gaddafi, and Assad, leaders who suppressed jihadism? What explains the sudden appearance of "the Russian threat" which has been hyped into dangerous Russophobia without any basis in fact?

The Muslim threat, the Russian threat, and the lies used to destroy Iraq, Libya, and parts of Syria are all orchestrations to serve Israeli and neoconservative aspirations.

The Israel Lobby in the United States, perhaps most strongly represented in Commentary, The Weekly Standard and The New York Times, used the September 11, 2001 attacks on the World Trade Center and Pentagon to urge US President George W. Bush to begin "a determined effort to remove Saddam Hussein from Power in Iraq." See here also.

Saddam Hussein was a secular leader whose job was to sit on the animosities of the Sunni and Shia and maintain a non-violent political stability in Iraq. He, Assad, and Gaddafi suppressed the extremism that leads to jihadism. Saddam had nothing whatsoever to do with 9/11, and under his rule Iraq constituted a ZERO threat to the US. He had been a faithful vassal and attacked Iran for Washington, which had hopes of using Iraq to overthrow the Iranian government.

The neoconservatives' wars against the Middle East serve to remove the governments that provide military and financial support to Hezbollah. By spreading jihadism closer to the Russian Federation, these wars coincide perfectly with the US neoconservative policy of US World Hegemony. As expressed by Paul Wolfowitz, US Undersecretary of Defense for Policy:

Israel wants Syria and Iran to join Iraq and Libya in American-induced chaos so that Israel can steal the water in southern Lebanon. If Syria and Iran are in chaos like Iraq and Libya, Hezbollah will not have the military and financial support to withstand the Israeli military.

That is what Syria is about. It is not about anything else.

The "Muslim threat" appeared suddenly with the 9/11 attack on the WTC and Pentagon. The attack was instantly blamed on Muslims. Although the US government maintained that it had no idea that such an attack was in the works, the US government knew instantly who did it. Quite clearly, it is impossible to know instantly who did an attack about which the government had no idea. In what has become the hallmark of every "terrorist attack," IDs left at the scene conveniently identified the "terrorists."

Research what some foreign government officials have to say about the absurd story told by the US government. That any percentage of the US population believes the obvious false official 9/11 story is proof of the total failure of education in America. Much of the population is incapable of thought. People simply accept whatever the government tells them regardless of the absurdity of the explanation.

Related Topic(s): Chaos; G-20; Israel; Muslim; Neoconservatives; Trump And Putin; Wars, Add Tags
Add to My Group(s)
Go To Commenting
The views expressed herein are the sole responsibility of the author and do not necessarily reflect those of this website or its editors.