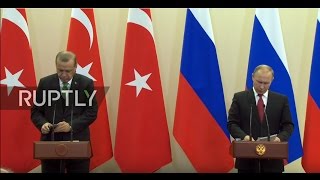 Yesterday's diplomatic agreement signed by Russian President Vladimir Putin and Turkey's President Recep Erdogan in Sochi, Russia should be considered a game changer, a major turning point in the war in Syria.

Erdogan agreed to end his so called "Peace Spring" initiative-an invasion by Turkish forces over the border into northeast Syria against the Kurdish militia's there he sees as terrorists.

The agreement has Syrian border guards along with Russian police and Turkish military patrolling the Syrian border area with Turkey while the Kurdish militia's withdraw deeper into Syria and become part of Syrian President Bashar Assad's Syrian Arab Army.

There is no doubt Putin's diplomatic outreach to Erdogan brought about the agreement. It solidified Russia as a key player diplomatically as well as militarily in helping the Syrian government regain control over that part of the country it lost to the US backed jihadist mercenaries and IS head choppers earlier in the war.

Trump's order for US military forces to withdraw from northeastern Syria into neighboring Iraq was a key development which intentionally or not contributed to Erdogan agreeing to end his invasion against the Syrian Kurds. Significantly the US took no part in the diplomacy in Sochi, even as an observer.

Additionally what this diplomatic development means is Syrian government sovereignty over its territory east of the Euphrates is restored. That leaves Idlib Province in northwest Syria as the last bastion where Jihadist IS terrorists remain in control. Though in August the SAA along with Russian special forces liberated the key town of Khan Shaykhun in southern Idlib.

Also yesterday Assad visited his troops stationed on the front lines of the southern Idlib countryside expressing the need to liberate the people suffering under terrorists control. His presence all but signaled a final push against the terrorists should begin soon after he returns to Damascus.

It should be noted US troops still remain in Syria in the al Tanf border region with Jordan, purportedly there to prevent the old Tehran Damascus Beirut trade route from reemerging. Just another US machination in Syria masked as curtailing the Iranian presence in the country. Something US ally Israel maintains is a threat to its security.

The war in Syria has lasted for more than 8 years but its end is in sight once the whole of Idlib Province is liberated by the SAA.

The devastation in Syria, hundreds of thousands innocent lives lost, people fleeing the country as refugees into Turkey, Lebanon, some attempting to flee into Europe where they were mostly unwelcome has now subsided with many refugees returning to Syria in areas now liberated.

There's also the need for reconstruction of the country devastated by the war. That will run into the $billions. Russia and China should likely be in the forefront rebuilding the country.

Syria would surely be a key node in China's Belt and Road Initiative considering its geopolitical location in the Middle East. Plus Russian civilian expertise should also play a significant part.

It still remains to be seen whether the US withdrawal from Syria is a serious move or Trump temporarily using it to fulfill a campaign promise he made in 2016 to "withdraw from these useless wars".

Those US troops in al Tanf weren't removed. Their remaining in Syria could be the true indicator as to US future plans.

Retired. The author of "DECEIT AND EXCESS IN AMERICA, HOW THE MONEYED INTERESTS HAVE STOLEN AMERICA AND HOW WE CAN GET IT BACK", Authorhouse, 2009
Related Topic(s): Agreement; Diplomacy; Invasion; Militia; Putin; Syria; Syrian Kurds; Turkish President Recep Erdogan, Add Tags
Add to My Group(s)
Go To Commenting
The views expressed herein are the sole responsibility of the author and do not necessarily reflect those of this website or its editors.