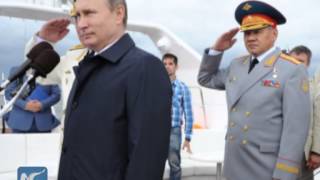 "Why does life almost come to a halt on June 22? And why does one feel a lump in the throat?"

This how Russian President Vladimir Putin chose to address the fateful day in 1941, when Germany invaded Russia, with an extraordinarily detailed article on June 19: "75th Anniversary of the Great Victory: Shared Responsibility to History and our Future."

Citing archival data, Putin homes in on both world wars, adding important information not widely known, and taking no liberties with facts well known to serious historians. As for the "lump in the throat," the Russian president steps somewhat out of character by weaving in some seemingly formative personal experiences of family loss during that deadly time and post-war years. First, the history:

"On June 22, 1941, the Soviet Union faced the strongest, most mobilized and skilled army in the world with the industrial, economic, and military potential of almost all Europe working for it. Not only the Wehrmacht, but also Germany's satellites, military contingents of many other states of the European continent, took part in this deadly invasion.

"The most serious military defeats in 1941 brought the country to the brink of catastrophe. ... By 1943 the manufacture of weapons and munitions ... behind the lines exceeded the rates of military production of Germany and its allies. The Soviet people did something that seemed impossible. ...the Red Army. no matter what anyone is trying to prove today, made the main and crucial contribution to the defeat of Nazism ...Almost 27 million Soviet citizens lost their lives, one in seven of the population ... the USA lost one in 320." [Emphasis added.]

Somber factual recollections. Significant, too, is Putin's explicit criticism of "crimes committed by the [Stalin] regime against its own people and the horror of mass repressions." Nor does he spare criticism of the Molotov-Ribbentrop Pact, denouncing its "secret protocols as 'an act of personal power' which in no way reflected 'the will of the Soviet people.'"

Putin notes that he asked for "the whole body of materials pertaining to contacts between the USSR and Germany in the dramatic days of August and September 1939," and found facts "known to very few these days" regarding Moscow's reaction to German demands on carving up Poland (yet again). On this key issue, he cites, "paragraph 2 of the Secret Protocol to the German-Soviet Non-Aggression Pact of August 23, 1939," indicating that it throws new light on Moscow's initial foot-dragging and its eventual decision to join in a more limited (for Russia) partition.

Look it up. And while you're at it, GOOGLE Khalkhin Gol River and refresh your memory about what Putin describes as "intense fighting" with Japan at the time.

The Russian president points out, correctly, that "the Red Army supported the Allied landing in Normandy by carrying out the large-scale Operation Bagration in Belorussia," which is actually an understatement. (See Ray McGovern -- Who Defeated the Nazis: a Colloquy and Ray McGovern -- Once We Were Allies; Then Came MICIMATT.

"No matter what anyone is trying to prove today," writes Putin, who may have had in mind the latest indignity from Washington; namely, the White House tweet on V-E day this year, saying "On May 8, 1945, America and Great Britain had victory over the Nazis."

And why does one feel a lump rise in the throat? Putin asks rhetorically.

"For my parents, the war meant the terrible ordeals of the Siege of Leningrad where my two-year old brother Vitya died. It was the place where my mother miraculously managed to survive. My father, despite being exempt from active duty, volunteered to defend his hometown. ... He fought at the Nevsky Pyatachok bridgehead and was severely wounded. And the more years pass, the more I treasure in my heart the conversations I had with my father and mother on this subject, as well as the little emotion they showed.

Ray McGovern works with Tell the Word, the publishing arm of the ecumenical Church of the Saviour in inner-city Washington. He was an Army infantry/intelligence officer and then a CIA analyst for 27 years, and is now on the Steering Group of Veteran Intelligence Professionals for Sanity (VIPS). His (more...)
Related Topic(s): Poem; Poetry; Russia; Straight Talker; Trilateral Commission; Vladimir Putin, Add Tags
Add to My Group(s)
Go To Commenting
The views expressed herein are the sole responsibility of the author and do not necessarily reflect those of this website or its editors.