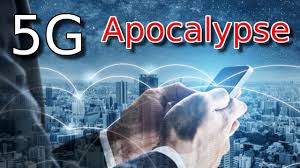 Over the last year, since we've moved from Kentucky to Westport CT, I've been an active member in a group of retired men. It's somehow associated with the YMCA and is catchily called "The Ys Men." Most of the members are former CEOs, lawyers, artists, scientists, academicians, small businessmen, local politicians, and otherwise smart people and community leaders. As such, they represent the epitome of community wise men.

Since joining, I've been part of a Current Events Discussion Group that meets every other Monday from 8:30 a.m. to 9:45. Usually about 50 men show up. At the end of each meeting, participants suggest and vote on the topic for the gathering to follow.

Last week, I proposed that at our next meeting, we discuss a film I had recently seen "5G Apocalypse: Extinction Event." And my motion carried. So, in less than two weeks, we'll discuss what I consider one of the most disturbing documentaries I've ever come across. You can access it here. What follows is the result of viewing the film several times and reading related material. It's made me skeptical about the 5G rollout.

"5G Apocalypse: Extinction Event" addresses the advent of the Fifth Generation (5G) of cell phone technology, which it portrays not only as a severe health threat, but as a menace to our freedom as citizens of a constitutional democracy.

The documentary actually makes three arguments. The first is that 5G technology even as presented by industry and government represents a severe threat to human and environmental health. The second is that those same representations are false; 5G technology emits not only supposedly harmless radio waves, but undeniably harmful radar and microwaves far beyond acceptable levels. The documentary's third argument is that such emissions secretly generated from s.m.a.r.t. products are ultimately weaponized for purposes of crowd-control to track people's movements and subdue them in case of insurrection.

In developing those points, "Extinction Event" presents on the one hand the pro-5G testimony of Federal Communications Commission chairperson, Tom Wheeler, his successor, Ajit Pai, as well as other spokespersons from corporations such as Verizon and Motorola. On the other hand, it offers damning critique from a long array of scientists, military personnel, investigative journalists, politicians, and activists calling attention to the extreme dangers of 5G technology.

As presented in the film, the proponents of the new technology stand united in fast tracking its implementation. We are in a race, they argue, with China, India, and the European Union for getting on top of this latest communications phenomenon. If our competitors (especially Chinese) prevail, it will mean we have ceded to foreigners the capacity to dominate the globe not only economically, but politically.

However, if successful with their proposed rush to market, Americans instead of the Chinese, Europeans, Indians or Russians will emerge in the dominant position just referenced. But, according to Wheeler, Pai and industry spokespersons, success hinges on the government suspending its regulatory power and upon cutting through "red tape" that would otherwise hinder the new technology's rollout. Here, "red tape" refers to delays caused by human and environmental impact studies.

In other words, industry leaders' haste to secure competitive advantage rules out any government oversight as well as public debate about health and surveillance implications of 5G. One advocate even suggests suspension of the Tenth Amendment of the U.S. Constitution, which assigns all (regulatory) powers to the states or people unless expressly delegated to the Federal Government. Evidently, the purpose of such suspension would be to unconstitutionally prevent local communities from opting out of 5G's technological imperative.

In exchange for such laissez-faire measures, industry representatives promise a utopian future of high-speed internet, enhanced global connections and billions of dollars in profit for the communications giants.

By way of contrast, critics of the new technology warn of an impending apocalypse. Hundreds of peer-reviewed studies, they say, indicate that 5G technology will:

Of course, the cigarette analogy recalls for 5G resisters the power of harmful industries to hire and mobilize scientists, academicians and the mainstream media to advance "alternative facts" contradicting the alleged consensus of their counterparts. In the case of the 5G controversy, critics point out, such dissenting studies generally appear in the mainstream media alongside ads sponsored by Verizon, AT&T, and other phone giants with vested interests not only in this new technology, but in selling it to an unsuspecting public.

Related Topic(s): Corporations; Government; Privacy; Radiation; Scientists; Sprint; Technology; Telecommunications; Verizon, Add Tags
Add to My Group(s)
Go To Commenting
The views expressed herein are the sole responsibility of the author and do not necessarily reflect those of this website or its editors.