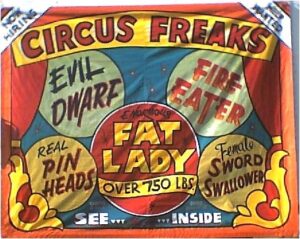 circus
(Image by Unknown Owner)   Details   DMCA
. . . pop the popcorn, spread the sawdust to soak up the manure, the Big Neocon Circus is coming to town!

Yes, it's that time of the season, when the zaniest and most disturbing of the side-show freaks lurch out of their boxcars, toss their pointy-hats into the GOP center ring and declare their respective candidacies for the Presidency of the United States.

Indiana Gov. Mitch Daniels, Reality TV egomaniac Donald "Hairflap" Trump, and Former U.S. Ambassador to China Jon Huntsman, are expected to pull out their best side-show routines and parade down the boardwalk this year. Seems Mississippi Gov. Haley Barbour backed out when he realized they already had a fat man in the back tent.

The latest clown to tumble out of the toy car is Newt "Serial Adulterer" Gingrich, who hopes to garner the GOP support from his throng of admirers, if not ex-wives. Newt can only hope the uber-Conservative Rapture Righties will forgive his many, many, many "indiscretions" and will focus on his steadfast attack on Bill Clinton; his unending critique of Willie's alleged infidelities, and his stellar record as Speaker of the House of Representatives, which culminated with his 1999 resignation under the considerable weight of 84 ethics violation charges.

Good luck with that campaign, Newtie. I hope you have a better answer for your hypocritical approach to engaging in adulterous sex with staffers (including -- gasp! -- one of your interns) than attacking the questioner as you did at your speech at the University of Pennsylvania in February. That was painful to watch.

Remember, you may have married (yet again) a good Catholic girl and converted yourself, but you're facing an army of God's good little soldiers (and cheerleaders) in this dog-and-pony show. Are you as pious as Pawlenty? As washed in the blood of the lamb as Rick Santorum? As clean and pure as Mighty Mormon Mitt? As secure in your personal relationship with Jesus as Mike "bin Laden's in Hell" Huckabee?

Heaven help you if Michele Bachmann smears on the greasepaint and joins the parade, or if Sarah Barracuda snaps the garters on her sparkly tights for the tight-rope talent portion of the campaign. Both of these heavenly creatures have been personally endorsed (and even exorcised) by high priests, who blessed and anointed these divine dimwits as deserving of the Highest Office in America to better serve Him and His Highest Holy Interests in Washington, DC.

You better forget the Rapture Right and just focus on the bigots and anti-government militia-types who don't care if you speak "Bible" as long as you let them tote their guns into school libraries and Hooters and such, and take random, careless shots at stray immigrants once in awhile.

But either way, when these jesters start juggling their Bibles, guns, budgets, and bigots, then we can expect a really great show!

Kathy never expected a career in radio as a talk show producer. Born and raised in Atlanta, Georgia, Kathy was completing her nursing degree when in 2001 - in an emergency - she was asked to fill in as the producer of Mike's program. Within a few (more...)
Related Topic(s): Campaign Rhetoric; Campaigns- Races Candidates; Clowns Of God; Neocons; Republican-slime-machine; Right Wing Freak-out; Smear Tactics, Add Tags
Add to My Group(s)
Go To Commenting
The views expressed herein are the sole responsibility of the author and do not necessarily reflect those of this website or its editors.