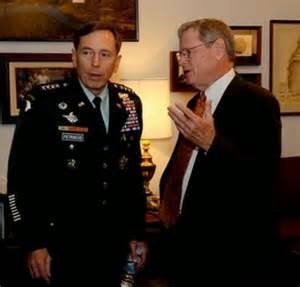 Copyrighted Image? DMCA
Sen. James Inhofe (R-Oklahoma) has introduced a bill to arm the U.S. puppet regime in Kiev with offensive weapons. This would expand the war along Russia's border and likely help in the neo-con plan to draw Moscow into a direct shooting match with US-NATO. Now is the time to send a message to your U.S. senator.


Not later than 15 days after the date of the enactment of this Act, the President shall submit to Congress a written report setting forth a comprehensive strategy of the United States to provide lethal weapons to the Government of Ukraine so that it may effectively defend itself from Russian-back rebel aggression.

Your action is urgently needed to stop this dangerous, provocative, and expensive bill that is only intended to make more chaos in Ukraine along the Russian border. The US does not give a damn about the people of Ukraine. Instead the US-NATO are acting as military agents of corporate capital who want control of Ukraine for the following reasons:

1) GMO outfits want the excellent farming soil in Ukraine
2) Oil corporations want to drill for fracked gas in Ukraine
3) The US-NATO want a "missile defense" base in Ukraine
4) The US-EU want to break up (Balkanize) Russia in order to have an easier time of regime change that would allow western energy corporations to take control of Russia's "largest supply of natural gas" on the planet
5) As Arctic ice melts the western energy corporations want control of the Arctic Ocean but Russia has the largest land border with that body of water. Thus Russia must be Balkanized and returned to the previous state under former President Yeltsin where that drunken 'leader' handed their nation's economy over to the west.

The 'crime' of Putin is that he has tried to reestablish Russia as a sovereign nation and refuses to turn over their vast natural resources to western corporations. Thus like Iraq, Afghanistan, Libya, Yugoslavia, and Syria the US-NATO intend to try to take Russia down to its knees.

Russia refuses to submit and so the new Cold War, that could get very hot quite quickly, is on. Now is the time for peace activists and other sane persons to act. Stop being frozen by recycled red baiting. Russia is not out to take over the world. They just want a secure neighborhood and will not give in to western corporate globalization.

Related Topic(s): Corporations; Energy; Military; Russia And China; Senate Armed Services Committee; Senate Foreign Relations Committee; Strategy; Ukraine; Vladimir Putin; Weapons, Add Tags
Add to My Group(s)
Go To Commenting
The views expressed herein are the sole responsibility of the author and do not necessarily reflect those of this website or its editors.