Push on we must, for it's the only way We the People have ever made progress toward the democratic society we seek 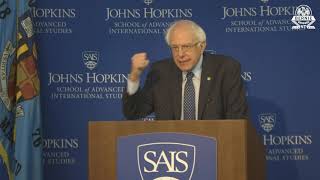 There's a sports cliche, often applied to political races, that devalues strong -- but losing -- contenders: "Close only counts in horseshoes," they snort.

For building a progressive movement, however, candidates, staffers and volunteers who lose a vote but run good campaigns especially in tough political terrain are, in fact, winners. Their campaigns attract new activists; develop the skills, talents and knowledge of all participants; increase support for particular issues and values; build political organizations and networks; and plant the seeds of change for the next campaign, either for the same candidates or for others who think, "Hey, with a few twists, maybe I could win." In movement building, success requires constantly expanding the group.

Bernie Sanders, for example, ran for office (and lost) four times before being elected mayor of Burlington, Vermont, in 1981 (by only 10 votes!). But he didn't get there by himself. Over the years, a steadily growing coalition organized around the wild-haired maverick and grew in numbers and governing abilities. When Bernie became mayor, the coalition was able to implement a range of landmark progressive policies. More voters equals more progress, which equals more trust, which equals more voters. Repeat.

Big populist issues matter in movement building. Let's take health care. If you have good insurance as all corporate political and professional elites do, the quality of the U.S. health system is merely an intellectual issue. But if, like millions, your coverage is iffy to nonexistent, health care costs fall between a constant worry and a full-blown crisis. This glaring disparity cuts across all racial, ethnic, gender, religious and even partisan lines, so the demand for major reform unites a majority of voters. The candidates who did well last year did not offer vague proposals to "expand" Medicaid or "protect" Obamacare, but instead hammered a clarion call of "Medicare-for-All."

This kind of bold, plain-talk populism cuts across many of the same political lines to help candidates who advocate equal pay for women, access to higher education, prison reform and affordable day care as well as banishing corporate money from politics and ending voter suppression. So, while national media mostly attributed November's increased vote for Democrats to Trump's negatives, the voter excitement that propelled many boldly progressive candidates was generated by their own positives. Their No. 1 appeal was advocating unabashedly for fundamental changes to address widening inequality and legalized oppression of workaday families. Comfortable elites don't always see that, but regular people feel it every day and seek candidates without corporate blinders -- candidates who see, understand and stand unequivocally with them.

Democratic movement building is not for wimps or those seeking instant gratification. Even in a good election year (as democratic populists certainly had in 2018), the movement must turn right around and do it again. It's physically straining and emotionally draining, with almost chaotic ups and downs, external ambushes and internal ego eruptions. This bumpy path is why movements must take root and mature over time. Activists must learn cooperation and earn group trust, setting aside picayune matters and self-importance to work together for the Common Good. In any given year, even a successful, growing movement will lose more elections than it will win, but the key is to persist, gaining ground incrementally toward the big goals of fairness, justice and opportunity for all.

There's good reason why these efforts are called "struggles." For starters, trying to hold together a naturally rebellious, widely dispersed and wildly diverse people's movement is like trying to load frogs in a wheelbarrow. And then, even with your team working well together, the struggle gets harder, for you're directly confronting the concentrated wealth and power of entrenched elites who abhor our egalitarian ideals and will go all-out to crush our efforts to democratize.

So, yes, it can be exhausting, and it can be tempting to just give up especially where the political climate is harsh, the rules are rigged and wins are scarce. Still, push on we must, for it's the only way We the People have ever made progress toward the democratic society we seek. Indeed, experience shows that steady grassroots pushing pays off. It took decades of organizing, but Bernie went from a fringe, "dark horse" mayor to America's most popular senator, while people aligned with him ran local campaigns that outmaneuvered the old guard's corporate-run political system to take top elected posts.

You know your community and state. You know the people's issues. You know your group's talents. And you can see how progressive issues, candidates and movements are advancing. Our task is to keep doing what brought us this far: organizing, harmonizing and mobilizing. Together, step by step, we can do this.

Related Topic(s): Democratic; Elections; GrassRoots; Movement For A Peoples Party; Politics; Progress, Add Tags
Add to My Group(s)
Go To Commenting
The views expressed herein are the sole responsibility of the author and do not necessarily reflect those of this website or its editors.