The island should have a say in who gets elected president and in the decisions made by the US Congress. 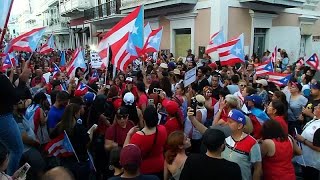 Mass demonstrations that should inspire every American have had a profound impact on Puerto Rico, where Governor Ricardo RossellÃ³ announced Wednesday that he will resign on August 2. He was brought down by a popular uprising over what NBC News describes as "a scandal involving leaked private chats, as well as corruption investigations and arrests."

The demonstrations are about more than just replacing a scandal-plagued governor. They represent a cry for what every American should want: government that reflects and represents the will of the people. The answer to that cry must extend beyond the resignation of RossellÃ³.

As veteran journalist and author Juan Gonza'lez said on Democracy Now! this week:

"[History] is replete with examples of popular uprisings that got rid of a corrupt or dictatorial government, but the people ended up with worse situations. Can we forget Tahrir Square in 2011 and the overthrow of Mubarak after several weeks of protest by the people? Or go back a little further to the Philippines in 1986 and the overthrow of Marcos by popular protest, or even further back to 1979 in Iran and the overthrow of the shah. In each of those cases, people thought their country was going to change dramatically and ended up, in some cases, in worse situations than before. So there's going to be a real test now among the leaders and the activists of Puerto Rico. Can they unite? Can they come up with a political force, a leadership that is really accountable to the Puerto Rican people? And that's going to be the big test in the future."

That test will face the people of Puerto Rico. Activist Christine Nieves responded to the news that RossellÃ³ was resigning with a tweet that declared, "And so the dismantling begins. Ricky has resigned effective Aug 2. Tomorrow we celebrate. Tomorrow we'll demand out w/fiscal board, auditing & canceling of debt. Today WE have changed history. Now, we want more. WE. WON'T. STOP." That's a commitment to democratic renewal that should be celebrated and supported by small-d democrats nationwide.

Related Topic(s): Citizens; Democracy; Puerto Rico Devastation; Representation; Statehood, Add Tags
Add to My Group(s)
Go To Commenting
The views expressed herein are the sole responsibility of the author and do not necessarily reflect those of this website or its editors.