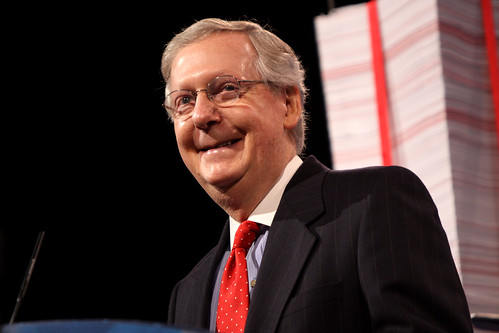 The legal structure of our democracy is stated in the Constitution. Although, with the perspective of changing times, some of the articles of the document may be subject to re-interpretation, its expressed principles should remain inviolable. For example, the principle of separation of church and state, although not plainly expressed, is embedded in the First Amendment granting freedom of religious belief - meaning the state cannot dictate or limit our religious beliefs unless they contradict other freedoms specifically granted, all subject to interpretation by the Supreme Court.

Adherence to all the principles of the constitution should be carefully monitored and understood by the layman citizen if our democracy is to function well. Here we will examine only one: the principle of balance of powers between the separate branches of government: the administration, congress, and the judicial. What I am questioning here is whether the balance of powers extends between the House of Representatives and the Senate.

Article 1, Section 5, Clause 2 of the constitution states: "Each house may determine the rules of its proceedings." As a layman, I have studied the various articles to discover anything that will grant one house of congress superiority over the other. The two-house concept was created in the model of the British House of Commons and the House of Lords. Its intent was to equalize the power of the people, as a united nation (the House of Representatives), and the interests of the individual states (the Senate). Legislation initiated in one house was subject to modification and approval by the other, then subject to approval by the president. The constitution delegates authority to each house for initiating certain categories of legislation.

The big question then is whether one house of congress, in the form of one person delegated by its internal rules, has the authority to obstruct the constitutional power and duty of the other (or the president), representing the interests of the entire nation, to present legislation for approval. In the many instances of such actions by Mitch McConnell - the refusal to consider President Obama's candidate for the Supreme Court, the House Bill HR1 for campaign reform, and presently, his promise to not conduct a fair impeachment trial of Trump in the Senate, etc. - there is clearly an unconstitutional obstruction of justice of major proportions. He is clearly a serious candidate for impeachment.

And to the extent that virtually all of his senate cohorts condone his actions, brings up the question of their constitutional legitimacy by placing party loyalty above their oath of loyalty to the American people - democrats and republicans. These actions are a threat to democracy on a scale equal to or greater than the communist party ever represented and should be treated as such.

Related Topic(s): Congress; Democracy; McConnell-Mitch; Unconstitutional, Add Tags
Add to My Group(s)
Go To Commenting
The views expressed herein are the sole responsibility of the author and do not necessarily reflect those of this website or its editors.