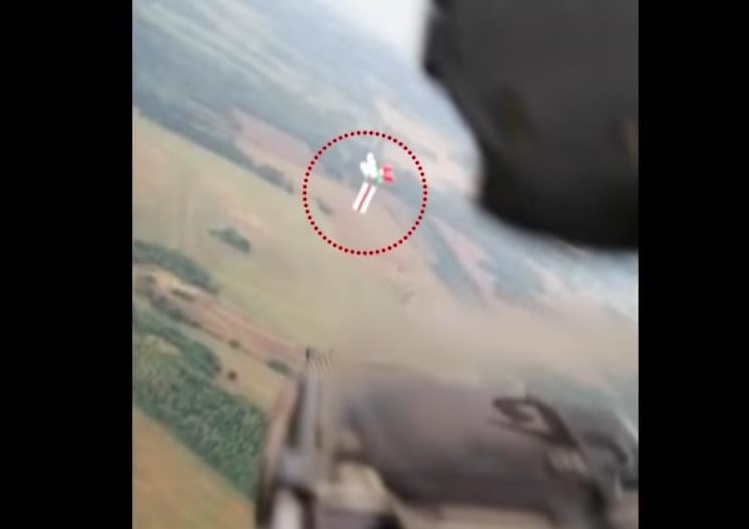 On Monday, 24 August, the press service of the Ministry of Defence of Belarus informed that on the evening of August 23, an attempt to violate the state border in the airspace of Belarus from Lithuania was suppressed in the area of the Kamenny Log border crossing.

The Belarusian Defence Ministry claimed it used Mi-24 military helicopters to stop eight air balloons "with anti-state slogans" from crossing the border during the Freedom Way demonstration in Lithuania.

"A probe of eight balloons with anti-state symbols was launched from the adjacent territory. Thanks to the actions of the crews of the Mi-24 helicopters, the flight of balloons was stopped without the use of weapons," said the ministry.

According to the Ministry of Foreign Affairs of Lithuania the Belarusian Mi-24 helicopter flew into Lithuania's territory near Medininkai on 23 August at 18.50 p.m.

"Their [Belarusian] helicopter breached our airspace and the Belarusian ambassador was presented with a strict note of protest," L. Linkevičius.

According to Linkevičius, the Belarusian military helicopter was spotted near Medininkai, a Lithuanian town close to the border.

"It was seen visually. We have all the information from our air traffic controllers [confirming] that there has been a violation," he said.

On 24 August, the Ministry of Foreign Affairs of Lithuania summoned the Ambassador of Belarus to Lithuania Valery Baranovsky and handed him a protest note regarding a violation of the state border of Lithuania.

In turn, the Ministry of Defence of Belarus has denied the statements of Vilnius about the violation of the state border of Lithuania by helicopter.

"I consider the actions of our pilots to be in full compliance with our and international legislation. Our pilots operated in the airspace of our state, this is recorded in the material of objective control. There was no violation of the state border of the Republic of Lithuania," said Alehas Orlov, Acting Deputy Commander of the Air Force and Air Defence Forces.

He also said that the Ministry of Defence considers the incident with the balloons as a provocation from the Lithuanian side.

According to A. Orlov, although "it may seem to an ordinary person that this fact is insignificant, any border of any state is inviolable".

He claimed that "those seemingly harmless balloons pose a threat to flight safety" and said "no one knows what kind of cargo those balloons carry".

"It can be very diverse: explosives, toxic substances and so on," Orlov said.

Journalist
Related Topic(s): Ambassador; International; Military; Peace; Protest; Provocation; Security; State; Threat, Add Tags
Add to My Group(s)
Go To Commenting
The views expressed herein are the sole responsibility of the author and do not necessarily reflect those of this website or its editors.

Provocation? Lithuania interferes in the internal affairs of Belarus