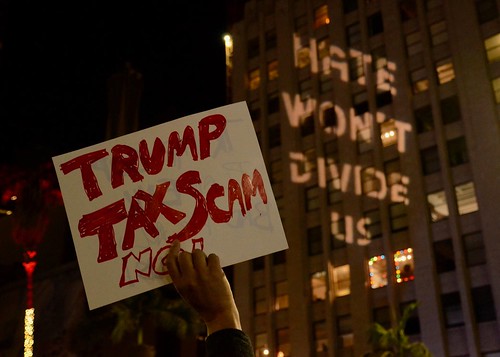 Your taxes are about to go up.

But it isn't because Joe Biden was elected president.

Three years ago, almost to the day, when the Republican party held the majority in both congressional chambers, Donald Trump signed into law the "Tax Cuts and Jobs Act," a $1.5 trillion-dollar permanent tax cut to corporations and the wealthy.

It promised to "deliver more jobs, higher wages, and massive tax relief for American families and for American companies."

What it accomplished, predictably, was slashing the corporate tax rate and encouraging businesses to put their additional capital toward paying off shareholders--not employees--to the tune of more than $700 billion.

An Economic Policy Institute and the Center for Popular Democracy report described how the tax overhaul "delivered big benefits to the rich and corporations but nearly none for working families."

CEOs were upfront about not increasing employee pay and are actively working, even today, to "reduce their work forces further."

Another time bomb set to detonate--conveniently right around the time the Biden/Harris administration is getting started--is a provision in the tax law to begin slowly increasing taxes on many low- and middle-income Americans.

Some will actually pay more than they did before the tax cut.

Those making $20,000 to $30,000 could owe an $365 next year just as we are struggling to hopefully lift ourselves out of the economic damage the coronavirus pandemic inflicted.

As Nobel Prize recipient, economist Joseph Stiglitz, explained in a New York Times op-ed at the end of October:

"President Trump and his congressional allies hoodwinked us. The law they passed initially lowered taxes for most Americans, but it built in automatic, stepped tax increases every two years that begin in 2021 and that by 2027 would affect nearly everyone but people at the top of the economic hierarchy. All taxpayer income groups with incomes of $75,000 and under--that's about 65 percent of taxpayers--will face a higher tax rate in 2027 than in 2019. For most, in fact, it's a delayed tax increase dressed up as a tax cut."

Yet too many Americans won't realize neither Biden nor the Democratic party had anything to do with it.

"For most, in fact, it's a delayed tax increase dressed up as a tax cut. How many times have you heard Trump and his allies mention that? They surmised--correctly, so far--that if they waited to add the tax increases until after the 2020 election, few of the people most affected were likely to remember who was responsible."

Related Topic(s): Biden Harris; Economic; Economy; Money; Trump; Trump Tax Bill; Trump Tax Cut; Trump Tax-cut Scam, Add Tags
Add to My Group(s)
Go To Commenting
The views expressed herein are the sole responsibility of the author and do not necessarily reflect those of this website or its editors.