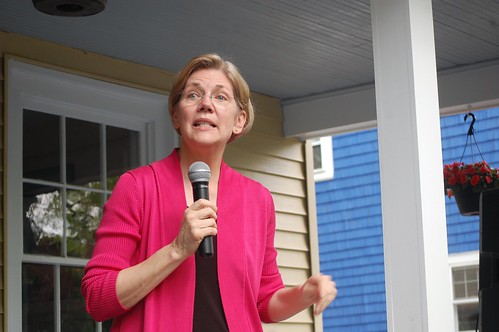 The current brouhaha over Elizabeth Warren's recent DNA test seems to represent yet another case of illiteracy so prevalent in Washington D.C. It is not simply a case of not being able to read or express oneself clearly, but the utter absence of perspective, understanding and subtlety, all "languages" not spoken there these days. President Trump, the Capitol's resident boor and hate monger and apparent pathological liar who never seems embarrassed when his lies are exposed, seems to have attracted a huge number of poor frustrated wannabes yearning desperately for the same right to ignore all facts with impunity. They wish that they too were permitted to project their evil bigotry and hate on perceived adversaries and victims without consequences as their leader does. However, just as Florida's Republican congress, authors of "Stand Your Ground" statutes, have to be satisfied by causing the deaths of "big bad scary" African Americans through fetid surrogate assassins, poor frustrated Trump followers must live vicariously through their Fuhrer, Herr Trump.

I have had occasion to deal with various leaders of the Cherokee, some honorable and overwhelmed with their responsibilities, others pretty much as corrupt and slippery as Mr. Trump. The real irony of the Cherokee leadership can be found in their self deprecating response to someone proud to be a "real" American. Like Ms. Warren, I cannot express the amount of pride I would feel to actually have Native American blood coursing through my veins!

Ironically, while various Europeans in North America have long denigrated Native Americans, ironically, in Europe itself they have most often been romanticized. Here, Europeans have managed to convince too many Native Americans that their culture is somehow inferior to that of the "White Man." Too many so called "sociologists," and "historians" seem to forget that when primitive ancestors of people who would become proud Zoroastrians, Jews, Christians, Muslims, and even Buddhists were still uncivilized some 15,000 years ago, Native Americans already had sophisticated rituals, honored "spirits" and civil laws, building the longest lasting continuous culture in the history of mankind. Their culture is far more ancient than even my Jewish culture, older than the Chinese culture and the rest of eastern and western civilizations.

Much as Robert Eisenman replied when asked if "Born Again" Jews ought to be considered Jewish, stating that we lost six million Jews in the holocaust and can't afford to lose any more, I believe that various foolish Cherokee leaders would do their nation a great service by accepting into their fold someone so proud to be part of their heritage. Far better to welcome family then to lend credence to a president whose henchmen are at this very moment using his bogus Supreme Court appointees to deliberately cheat Native Americans in North Dakota out of their right to vote!

Related Topic(s): Bigotry; People; President Trump; Senator Elizabeth Warren; Trump Attacks Elizabeth Warren, Add Tags
Add to My Group(s)
Go To Commenting
The views expressed herein are the sole responsibility of the author and do not necessarily reflect those of this website or its editors.