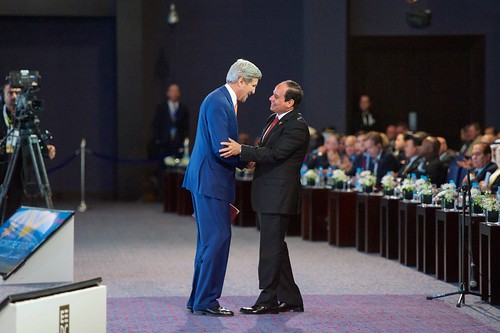 Security forces in Egypt have clashed with hundreds of protesters in the port city of Suez, according to media reports, firing tear gas and live rounds to disperse crowds calling for President Abdel Fattah el-Sisi to quit, Al Jazeera reported Sunday (Sept 22).

The unrest on Saturday came a day after thousands of people took to the streets in several Egyptian cities in a rare show of dissent against el-Sisi, who has overseen a broad crackdown on dissent including the jailing of thousands of dissidents and the effective banning of protests.

A protester in Suez told the AFP news agency about 200 people headed to the city's central area for a second night in a row, where they were met by security forces and armored vehicles.

"They [security force] fired tear gas, rubber and live bullets and there were injuries", the man who declined to be named told the AFP.

Protests were also reported in Giza, the capital Cairo's twin city, and in the northern town of Mahalla. Al Jazeera is banned from reporting inside Egypt.

The AFP, citing an unnamed security source, said at least 74 people had been arrested on Friday in the capital after clashes between police and protesters, who had marched through the streets of Cairo, chanting slogans including "Leave, Sisi!" and demanding the "fall of the regime".

Videos on social media showed dozens of Egyptians demonstrating in front of el-Sisi's residence in New York, where he is scheduled to speak at the United Nations General Assembly this week.

The anti-Sisi demonstrations were met with tens of his supporters also staging a demonstration to chant slogans praising his achievements.

The Egyptian diaspora in Washington, DC also staged a vigil in front of the White House to denounce el-Sisi, Al Jazeera reported. The protesters called on US President Donald Trump to end his support for el-Sisi and demanded that el-Sisi leave the US.

The demonstrations were in response to an online call by an exiled Egyptian businessman, Mohamed Ali, who has accused el-Sisi and his aides of squandering public funds on vanity projects.

Ali, a construction contractor, upped the pressure on Saturday in an expletive-filled video, imploring Egyptians to join a "million-man march" next Friday and to fill all "major squares" of the country.

"This is a people's revolution ... We have to link up together as one ... and organise going down to the major squares," he said in a Facebook appeal to his followers.

Author and journalist. Author of Islamic Pakistan: Illusions & Reality; Islam in the Post-Cold War Era; Islam & Modernism; Islam & Muslims in the Post-9/11 America. Currently working as free lance journalist. Executive Editor of American (more...)
Related Topic(s): Cairo; Demonstrations; Diaspora; Egypt; El-sisi; Morsi; Protestant, Add Tags
Add to My Group(s)
Go To Commenting
The views expressed herein are the sole responsibility of the author and do not necessarily reflect those of this website or its editors.