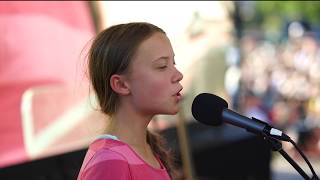 We can all use a shot of hope. I got one from 16-year-old Swedish activist Greta Thunberg and the disproportionately youthful masses -- 4 million across 150 cities worldwide -- who came out for climate sanity last week. I listened online to the speech Thunberg delivered to more than 300,000 mostly young people in lower Manhattan on Friday. She spoke eloquently about the supreme ecological danger we face, thanks to the relentless pursuit of profit and to the insincere assurances and pathetic inaction of politicians and policymakers the world over:

"We have not taken to the streets, sacrificing our education, for the adults and politicians to take selfies with us and to tell us that they really, really, really admire what we do. We are doing this to wake the leaders up. We are doing this to get them to act. We deserve a safe future. Is that really too much to ask? ... We will hold those who are most responsible for this crisis accountable and we will make the world leaders act. ... Why should we study for a future that is being taken away from us? That is being sold for profit. ... Everywhere I have been, the situation is more or less same. The people in power, their beautiful words are the same. ... The empty promises are the same. The lies are the same, and the inaction is the same."

Thunberg inspired me to walk out of my Chicago apartment building and make my way to the student climate strike at the Loop. There, I beheld a vast procession of mostly young people, including high school and even grade-school students, chanting and holding up signs with pithy slogans expressing a passionate desire to help keep the planet safe for humans and other living beings. The young people's chants and cheers drowned out the roar of the L-trains above. I got in the middle of the march, talking to kids, asking them how their teachers felt about their afternoon off school (many were supportive), querying them, not as a journalist looking for a story, but as an old guy seeking an infusion of hope and energy from people who haven't become as jaded, cynical and defeated as most of my generational cohorts.

It was good to take a cue from the kids, to turn off the computer and come out into the streets. When I first came of "radical" political age in the late 1970s, my fellow late new lefties and I were all about ecology, sensing that humanity was entering a period of environmental crisis. We read Rachel Carson, Edward Abbey and Barry Commoner, among other clarion voices telling us that Homo sapiens needed to call off its capital- and government-led war on a livable planet.

Many of us got lost, turning away from the earth that bears ever angrier witness to our destructive capitalist and industrial ways. I got caught up in the quest for a career and working on important issues that aren't going to matter all that much if we don't act soon to avert environmental collapse; after all, there's no social justice or democracy on a dead planet. This was a mistake.

Still, I am not utterly devoid of lessons worth passing on to younger people from previous decades of political engagement and observation. One chant that history would not let me join in on Friday channeled popular anger into the nation's empty, savagely time-staggered and corporate-captive electoral rituals. "Politicians take note," the chant went, "students will rise up and vote."

To what end? There has been no greater progressive delusion and no bigger graveyard of social movements in American history than U.S. candidate-centered electoral politics. Voting for a Democrat who sounds like he or she cares about the environment fixes nothing. It can actually make things worse, by creating an illusion that one has meaningfully advanced hope and change when one has really just helped put deceptive new clothes on the soulless empire of ecocide. Candidate Barack Obama claimed he would help stop global warming and thereby make the ocean stop rising. As president, Obama stealthily championed fracking and offshore drilling, along with the national surveillance and police state that dismantled the Occupy camps and cordoned off the Standing Rock water and climate protectors. Since leaving office, "clean power" Obama has boasted to oil company executives and managers about his role in boosting so-called American energy independence by expanding domestic U.S. oil and gas production. He was a green president, all right -- green, as in serving those with money and reaping the cash rewards after leaving office. He helped green-wash capital's war on a livable planet, giving it counterfeit progressive cover. Now he tells Thunberg that he and she are "a team."

A president Joe Biden or Elizabeth Warren will not seriously confront climate collapse. Only a Bernie Sanders presidency holds serious promise in that regard, and the carbon-invested and addicted corporate and financial powers that be, within and beyond the Democratic Party, are not going to let such a thing occur.

Impeachment also won't get us out of our environmental mess. In fact, in the days since Thunberg's speech in Battery Park, the now distinctly possible coming impeachment of Donald Trump took over the news cycle. The climate issue was trumped yet again in the dominant media-politics culture of the world's most powerful and environmentally ruinous nation. (Even on Friday, the massive student climate protests were not mentioned until 10 minutes into "CBS Evening News," preceded by reports of a bus crash and the New England Patriots' firing of its star wide receiver, Antonio Brown.)

The president richly deserves impeachment, but the Republican-controlled Senate is too afraid of his white nationalist base to remove him, and removing him would only put the Christian fascist Mike Pence in the White House. The notion of impeaching the eco-fascist Trump for his most egregious sin -- accelerating the project of turning the planet into a giant greenhouse gas chamber -- is, of course, completely off the table.

Protests are not without limits. They can move one forward on the path to seriously confronting concentrated wealth and power, but they can also serve as pressure-reducing safety valves, providing emotionally potent illusions of popular power and functioning as strange vehicles of incorporation and co-optation. The deadly system marches on, without serious disruption of its inner workings. As Truthdig columnist Chris Hedges reflects, protests "can also be empty political theater" and "can be used to distance ourselves from a repugnant political figure such as Donald Trump, while leaving us silent and complicit when the same policies are carried out by a supposed progressive such as Barack Obama."

Things get serious when you go beyond protest to resistance by deciding, to use the young Free Speech activist Mario Savio's words more than a half-century ago, that "the operation of the machine [has] become so odious " [that] you've got to put your bodies upon the gears and upon the wheels, upon the levers, upon all the apparatus -- and ... make it stop. ... You've got to indicate to the people who run it, to the people who own it, that unless you're free, the machine will be prevented from working at all."

If that time hasn't arrived by now, it never will. The machine -- "modern" global and militarized state capitalism -- has gone far beyond odious . It is literally exterminist, placing prospects for a decent and organized human existence at terminal risk. Capital and its allies and servants within and beyond governments are pushing us ever closer to irreversible environmental tipping points.

"You have stolen my dreams and childhood with your empty words," Thunberg told world leaders Monday at the United Nations. "Entire ecosystems are collapsing. We are in the beginning of a mass extinction, and all you can talk about is money and fairy tales of eternal economic growth. How dare you!"

Paul Street (www.paulstreet.org and paulstreet99@yahoo.com) is the author of Empire and Inequality: America and the World Since 9/11 (2004), Racial Oppression in the Global Metropolis (2007), Barack Obama and the Future of American Politics (more...)
Related Topic(s): Climate; Impeachment; March; Protest; Slogans; Students; Trump, Add Tags
Add to My Group(s)
Go To Commenting
The views expressed herein are the sole responsibility of the author and do not necessarily reflect those of this website or its editors.