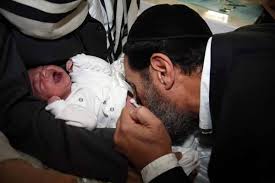 Problems must be addressed head on, even if we're uncomfortable dealing with them. If we truly want to overcome very real problems, we are required to realistically and rationally address them. Without objectively confronting them, we can never solve them, and their negative impact on people and the world will continue. Thankfully we are equipped with the only tool that allows us to do this: our innate God-given reason.

One such problem that needs to be strongly confronted is the practice in Judaism known as metzitzah b'peh, which requires the rabbi/mohel doing a circumcision to use their mouth to suck blood from the circumcision wound of the infant. Although it is endorsed by Israel's government rabbis of the Chief Rabbinate of Israel, it is not embraced by all of Judaism and is usually performed by Orthodox and Hasidic Jews. The real life negative consequences of this ungodly, repulsive and unnatural religious practice are evident in cases from New York City. In these cases it has caused the infection of herpes and resulting deaths of at least two infants and the infection of dozens of other infants with herpes, as well as the brain damage of infants caused by being infected with herpes. In the last six months at least four infants have been infected with herpes due to metzitzah b'peh. (More than likely the infections and deaths are under reported, as the Orthodox and Hasidic communities have as little contact with outsiders as possible, similar to many Christian sects who kill children through faith healing.) In addition to the harmful and deadly impact metzitzah b'peh has on helpless and innocent infants, it forces us to question how people could ever think that metzitzah b'peh was not only a good idea, but that it is from The Supreme Intelligence/God.

Metzitzah b'peh is part of the circumcision religious ritual of Judaism of eight-day old boys. The circumcision myth originated in the Hebrew Bible/Old Testament at Genesis 17:7-14, in which God allegedly, according to the ancient Jewish clergymen who wrote it, commanded Abraham to be circumcised and for all male Jews and for all of their male slaves to be circumcised as a covenant between God the the Jews. Circumcision was to be carried out by all future generations of Jews.

In this case, if the first religious myth, that God commanded the Jews to be circumcised, is destroyed by our innate God-given reason, then the second religious problem, metzitzah b'peh, is also destroyed, thus protecting the helpless children from infection, brain damage and death.

Bob Johnson is a paralegal and a freelance writer in Florida. He was raised Roman Catholic, but after reading Thomas Paine's The Age of Reason, he became a Deist. In 1993 he founded the World Union of Deists and in 1996 he launched the first web (more...)
Related Topic(s): Belief; Bible; Children; Deism; Faith; God; Jesus; People; People; Religion, Add Tags
Add to My Group(s)
Go To Commenting
The views expressed herein are the sole responsibility of the author and do not necessarily reflect those of this website or its editors.