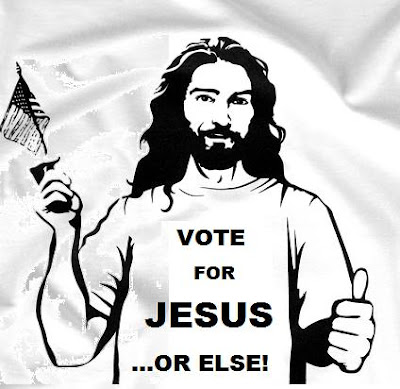 "MITT ROMNEY IS NOT RUNNING FOR 'PASTOR-IN-CHIEF'" says Franklin Graham.

But Rick Santorum IS running as the "Jesus Candidate".

There are approximately 295 days left of this election year and the batsh*ttery has only begun to take place. It's going to be a free-for-all of Dominionism, self-righteousness, mud-slinging, blatant bigotry, homophobia, anti-Catholicism, anti-Mormonism, with a slew of fake miracles thrown in for good measure.

The reason? The zealotry of today's "Social Conservatives" (Christian Right or CR) knows no bounds. In a time when separation of Church and State may be needed more than ever, they are furiously trying to break down the wall and establish itself as the  only  religious authority in America. And while the panoply of Right Wingnuts is not without its secular side,* the economy, jobs, immigration, the environment and foreign policy may end up taking back seats to social issues such as abortion, same-sex marriage and All American Muslim. "To hell with immigration, what about homosexual indoctrination in schools disguised as anti-bullying programs?" "Why talk about war with Iran, when we have sharia law creeping up on us throughout the country?"

They know their power, but they also know that power must be unified: last Friday (Jan. 13 - an ominous date to be sure) some  150 leaders met in Brenham, Texas  to discuss just that. The  luminaries included Tony Perkins (Family Reasearch Council), James Dobson (Focus on the Family), Don Wildmon (American Family Association) and Gary Bauer (American Values).  It was initially suspected that this gathering would decide which presidential GOP candidate they should completely support and which ones they should "request" to step down. The results: Santorum is the one. But wait! They've asked neither Gingrich nor Perry to step down! A closer look at the players in this game reveals that not all of the Christian Right are willing to back Santorum unconditionally. Big players like Jim Garlow (see below) are still backing Gingrich. Who's backing Perry? Bryan Fischer (shudder).

Today, when it comes to religio-political strategies it's safe to say that fortitude is the name of the game: no matter what South Carolina** brings, everyone has to forge through Super Tuesday and beyond. Schemes have to be laid and ads have to be placed so that issues are kept fresh in the minds of the voters all the way up to the election, no matter who wins the nomination. The primary war strategy is to "get Obama at all costs" while the secondary strategy is to "vote with 'Christian' values."

Fortitude. Determination. Ruthlessness. Viciousness. Self-Righteousness. Craziness. Stupidity. They'll all build exponentially, because on top of everything else there are the statewide and local issues at stake: some states have propositions for same-sex marriage, while others have more immigration regulations, repeals of "liberal" laws, and recalls of judges and politicians.

It will be a wonder that anyone is left standing after Nov. 6. And for those of us who will be, we'll need to pinch ourselves to make sure it wasn't a a bizarre dream.

In the realm of the Christian Right, there are more wingnuts than there are stars in the heavens, so I've tried to whittle the count down to a few who we will be seeing throughout the rest of this ungodly season


David Barton . David Barton will keep steamrolling through history and twisting Thomas Jefferson into a Gordian Knot. In his book,  The Jefferson Lies , Barton tries to posit an evangelical Jefferson - a fact which in itself is a lie. In a sense, Barton has been given the scepter of King Of The Dominionists. And for good reason: not only does he continue to bear false witness against the likes ot Thomas Jefferson et al, but he drones on and on about how America MUST be a Christian nation. Actually, the impetus of his thought leads to: Christian ONLY nation. Although he has neither a degree in history, nor one in theology or a masters of divinity, he now dictates which aspects of American life are biblical or non-biblical.

The unfortunate thing about Barton is that people actual eat up his hubris, making the liar that much more of a celebrity. Trust Barton to weigh in on every candidate. This year, he will analyze our political process every biblical step of the way... with any amount of (fake) authority he can muster.

Rev. Dan Vojir is has been writing/blogging on religion and politics for the better part of ten years. A former radio talk show host (Strictly Books " Talk America Radio Network) and book publisher, Dan has connected with some of the most (more...)
Related Topic(s): Ann Coultergeist; Bryan Fischer; Cindy Jacobs; David Barton; Duggar Family; Franklin Graham; Gary Bauer; Gingrich Newt; Glenn Beck; Janet Porter; (more...) Lou Engle; Santorum Rick; Tony Perkins, Add Tags  (less...)
Add to My Group(s)
Go To Commenting
The views expressed herein are the sole responsibility of the author and do not necessarily reflect those of this website or its editors.