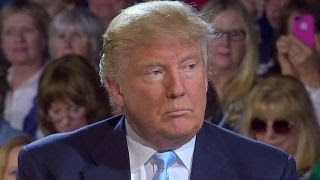 The U.S. Commerce Department announced this week that the 2017 trade deficit rose to the highest level since 2008, a biggest and best figure that no U.S. President would brag about, least of all Donald Trump, who pledged repeatedly and forcefully that he would slash the deficit -- and fast.

Steel, aluminum, and factory workers across America are still watching and waiting as their mills close and their unemployment benefits expire, even though Trump promised them quick action.

The Commerce Department reported the trade deficit rose 12 percent during Trump's first year in office, that the goods deficit with China jumped 8 percent to a record $375.2 billion, that the overall non-petroleum goods deficit shot up to an unprecedented high of $740.7 billion. Those terrible numbers testify to an administration dawdling, not performing for American workers who voted for Donald Trump based on campaign promises of quick and easy action to cure bad trade.

This is what candidate Trump told those Monessen workers, whose families suffered over the past 40 years as mills closed, good-paying union jobs disappeared and their towns crumbled for lack of tax revenue: "This is not some natural disaster; it's a political and politician-made disaster. Very simple. And it can be corrected, and we can correct it fast when we have people with the right thinking."

The President did hire people with the right thinking. Among them are U.S. Commerce Secretary Wilbur Ross, U.S. Trade Representative Robert E. Lighthizer, and Peter Navarro, director of the National Trade Council and Office of Trade and Manufacturing Policy.

And the President has taken some steps in the right direction. Late last month, he imposed four years of tariffs on imported large residential washing machines and solar panel components. This came after unfair imports bankrupted nearly every solar manufacturer in the United States. And Whirlpool argued that its South Korean washer competitors had moved their production facilities around the world to skirt previous U.S. tariffs.

Last November, the Trump administration launched the first U.S.-initiated anti-subsidy and anti-dumping investigation in decades, this one into imports of Chinese aluminum alloy sheet.

Before that, in April of 2017, Trump opened investigations under Section 232 of the Trade Expansion Act of 1962 into whether unfairly traded imports of aluminum and steel are so diminishing U.S. domestic capacity that national security is threatened. The Commerce Department self-imposed a deadline of July to submit recommendations for action to the White House.

Finally, last month, the Commerce Department delivered its recommendations in the Section 232 cases to the President. But the administration kept them secret. And Trump still hasn't taken action. American steel and aluminum workers continue to lose their jobs. Communities continue to suffer.

That day in Monessen, Trump told the workers, "When subsidized foreign steel is dumped into our markets, threatening our factories, the politicians have proven, folks, have proven they do nothing."

Trump made a series of specific promises to the workers in Monessen, virtually none of which have been kept.

Related Topic(s): Broken Promises; Imports; Jobs; Manufacturing; Trade Deficit; Workers, Add Tags
Add to My Group(s)
Go To Commenting
The views expressed herein are the sole responsibility of the author and do not necessarily reflect those of this website or its editors.